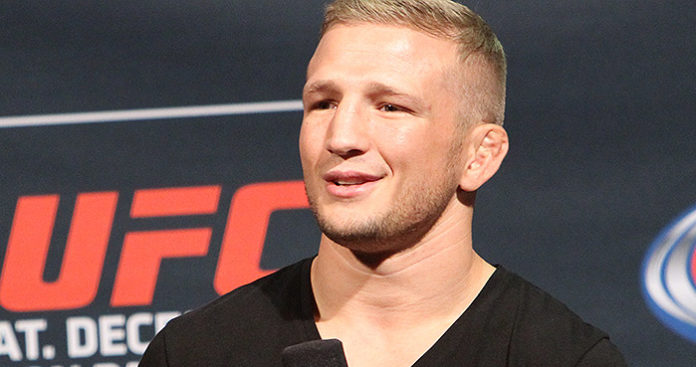 Tyler Jeffrey Dillashaw, better known as T.J. Dillashaw, is a professional fighter and mixed martial arts trainer. He is most commonly known for being the former Ultimate Fighting Championship Bantamweight Champion. You may also know him from Ultimate Fighter 14: Team Bisping versus Team Miller where he made it all the way to the finale in Las Vegas, Nevada. Today we are going to take a closer look at how he made his fortune.

How did T.J Dillashaw Make His Money & Wealth?

T.J. was born on February 7, 1986, in  the small town of Sonora, California. He was born to parents Janice and Hal Dillashaw. During his childhood the family moved to Angels Camp City, California. He continued to live their for the rest of his childhood and even attended the local high school, Bret Hart High School. While attending the high school he participated in several extracurricular activities. Two of the activities that he participated in were wrestling and football. He wrestled for the school on its wrestling team all four years, but was only a part of the school’s football team a single season. In June of 2004, he went on to graduate high school and enrolled in college. The college that he enrolled at was California State University in Fullerton, California. After being accepted into the college T.J. went on to compete for the school’s wrestling team, The Titans.

As a result of his impressive high school accomplishments as a wrestler, T.J. received a full scholarship to compete on the wrestling team for the Fullerton Titans at Cal State. During his freshmen year, T.J. had a record of 14-16 including a record of 10 – 8 for dual matches. For Pac-10 at dual meets, he went on to achieve a record of 3 – 4. During the early summer of his 2006 college years, T.J. traveled to Ukraine where he could work on and improve his skills. In his sophomore year, Dillashaw improved immensely. He had an admirable overall record with 17 wins and 14 losses. For dual matches, he had a record of 11 – 4. In the big Pac-10 championship, he finished fourth. In April of 2007, he went on to compete in the University Greco Wrestling Championship, held at Akron, Ohio. He finished sixth in the competition. That same year he finished fourth for the Pac-10 championship. During his senior year, he earned a record of 22-10 and held four pins. Dillashaw once again placed fourth in that year’s Pac-10 competition with a record of 7-0. Dillashaw also placed second at the Cliff Keen Invitational. During his senior year, T.J. was ranked number 10 in the U.S. at 133 pounds.

Once Dillashaw graduated from California State University, T.J. turned to mixed martial arts. During his time at California State University, he was coached by Mark Munoz, a former UFC Middleweight. Munoz saw T.J.’s great success with wrestling and offered T.J. the chance to join the Reign Training Center in the professional fighter class once he was finished with his last year of college. T.J. trained at the training center for over a year but was then urged by Munoz to find a training center closer to Dillashaw’s hometown at Angles Camp, California. As a result, T.J. quickly started training at Team Alpha. During his time at Team Alpha Male, he had an amateur record of 2-0 before quickly going professional.

His official professional debut was in 2010 on the night of March 26th. His debut was against a fellow debut in the pro world of mixed martial arts, Czar Sklavos. T.J. used his advanced wrestling techniques to win a unanimous and dominant decision win. Only two months after the win, Dillashaw took on Brandon Drucker. He won the first round via a submission hold. The fight was held duing Fight for Wrestling, which is an event that is held to raise and generate money for the California Poly wrestling squad. Dillashaw went on to get two more victories bringing Dillashaw’s record to 4-0 just before deciding to try out for Ultimate Fighter 14.

T.J. signed on to participate in Ultimate Fighter 14: Team Bisping versus Team Miller. He competed against Matt Jaggers in episode one in order to be granted entry to the show’s Ultimate Fighter house. Jaggers was defeated in the first round via a KO by Dillashaw. T.J. was a part of Team Bisping and was the second bantam weight for that particular team. T.J then went on to beat several other contestants including Roland Delorme and Dustin Prague.

T.J. made his official UFC debut to the world December 3, 2011, at the finale of Ultimate Fighter 14. The championship was held in Las Vegas, Nevada and he fought John Dodson in order to help determine who would  win Ultimate Fighter season 14. Unfortunately, Dillashaw lost the fight via TKO. T.J.’s second fight came February 15, 2012, when he competed against skilled fighter, Walel Watson. T.J. won the match via a solid unanimous decision. T.J. has continued to lead a successful career as a UFC fighter. As a result of his success Dillashaw has been selected to become a coach for upcoming matches where he will help train the participants. 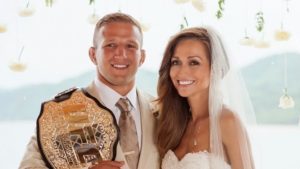 Yes! T.J. has been married to his wife Rebecca since June of 2014. Rebecca and T.J. met at college at quickly fell in love after dating for several years. They have very recently celebrated their third anniversary.

Does T.J. Dillashaw have any children?

It was announced via a social media video in June of 2017 that T.J. and his wife, Rebecca, were expecting their first child. The child is due in late December of 2017. Congratulations are in order for the first time parents!

Where does T.J. Live? 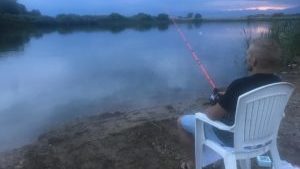 Dillashaw lives in a beautiful home in Denver, Colorado.  He originally moved to the area to train with Duane Ludwig, but loved the scenery and wildlife so much, that he decided to stay and raise his family.  The fighter home, isn’t just beautiful on the inside, but also boast a beautiful backyard looking onto a sprawling lake that is perfect for some relaxing fishing after a long day training at the gym.

Where did T.J. attend college?

Both T.J. and Rebecca attended California State University, Fullerton. In fact, It is where they met each other for the first time and the rest is history!

What does T.J. Dillashaw drive? 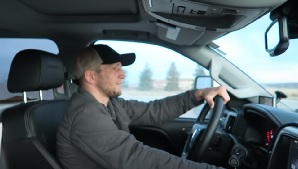 Dillashaw loves his trucks, but his pride and joy is a GMC Denali.  The Denali is a truck with a V8 engine, 355 horsepower, and can tow up to 9,100 lbs.  All that power does come at a cost, with the vehicle having a less than stellar 15 mpg in cities.

Does T.J. have any upcoming projects?

T.J. will continue to compete in UFC matches throughout the year. He also has plans to continue training himself and others in his camp in Denver, Colorado. His current training is focused on regaining his bantamweight title, and fighting the current title holder, Cody Garbrandt. He will of course is also sure to be busy raising his first child alongside his wife.

Chris Freeman
Chris went to school at the University of Maryland, and while rooting for the Terps, he began his career of freelance writing. Now a college grad and a passionate teacher, he enjoys taking the time to write articles and research the next big thing.
RELATED ARTICLES
Sports