Silento is best known for the incredibly contagious song “Watch Me (Whip/Nae Nae)”. The single not only triggered a frenzy of dance videos all around the globe (not to mention a lot of cases of last song syndrome), but also amassed billions of views on YouTube and a 6x Platinum certification in the United States. Read on to find out more about the rapper and his social media whereabouts:

Ricky Lamar Hawk, or better known as SIlento, was born on January 22, 1998, in Atlanta, Georgia. Due to the divorce of his parents, he grew up under the care of his mother, grandmother, and aunt. The latter wanted Silento to pursue a career in pharmacology, but the boy already had music in his mind. In eighth grade, Silento became part of a rap group. However, he noticed that his fellow rappers were not taking music seriously as he did, hence his decision to go solo.

With musical influences such as Usher and Mariah Carey, Silento worked on his own songs. He also performed at birthday parties and school events around the neighborhood to further hone his skills. The turning point in his career happened in late 2014 when he recorded the iconic single “Watch Me (Whip/Nae Nae)”. He worked on it for three months with the help of Bolo Da Producer, who thought that the song was not going to be a hit. Silento claimed that the inspiration behind the song was the combination of two popular dances namely the whip dance and the nae nae. He also included dances from popular hip hop songs “Stanky Legg” and “Crank That (Soulja Boy)”.

The song was uploaded on YouTube a few months later and gathered over a million views in just a single week. It also became a social media craze in no time thanks to Silento’s efforts in promoting himself on Instagram and Soundcloud. Moreover, popular online community DanceOn Network encouraged people all over the globe to upload videos of them dancing to “Watch Me”.

Due to the song’s success, Capitol Records offered Silento a contract in April 2015. The label then released his song as a single with a music video which reached the third spot of the US Billboard Hot 100. Additionally, Silento had his taste of performing at the Black Entertainment Television (BET) Awards during the same year alongside the cast of sitcom Black-ish. He also performed a remixed version of the song for Nickelodeon to promote their shows for Labor Day. Finally, “Watch Me” gathered two nominations during that year in the Teen Choice Awards and MTV Video Music Award respectively, and won the Best Dance Performance accolade in the Soul Train Music Awards.

Silento released another single in 2016 titled “Get Em”, again in tandem with Bolo Da Producer. Although the song did not reach the same level of attention its predecessor had, it still managed to earn positive remarks from fans. Silento also collaborated with other artists such as Sunny for “Lightning in a Bottle” and Sophia Grace for “Girl in the Mirror”. For 2018, the rapper released a couple of new singles like “Young Love”, “Wild”, and “All About You”. 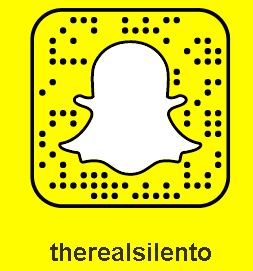 You can follow Silento on Snapchat by clicking here.

Silento Kik Username or Code –  As of this writing, the rapper does not have an account on Kik. If he ever decides to make one, then we will update this information. Don’t forget to bookmark this page so you are updated.

The Gazette Review is your daily news source covering everything from world news to personal finance. We provide the most recent, unbiased accounts of the news that matters to you. Contact us: [email protected]ew.com