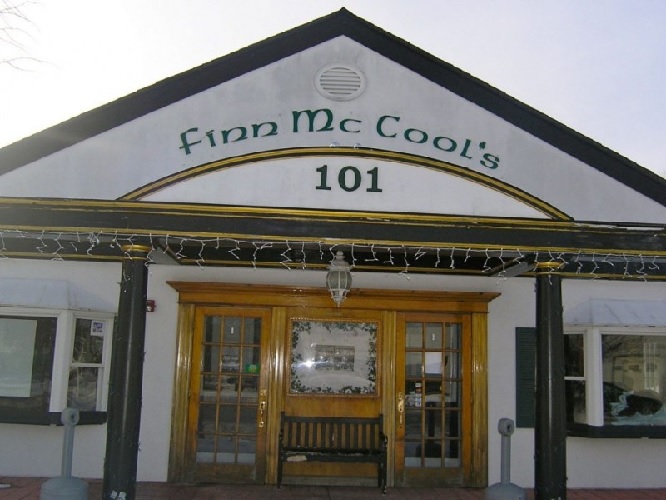 Gordon Ramsay visited Finn McCool’s, an Irish-themed and family run restaurant in the idyllic surroundings of Westhampton Beach in Long Island, New York in February 2007. During the summer months the tourist season brings in plenty of tourists, but with a population of just 1,721 Westhampton Beach eateries usually suffer during the off-season. And there are a range of other problems facing owner Buddy Mazzio that are causing the restaurant to be particularly slow in the winter, and it isn’t all that popular with the locals either.

In 2006 Buddy retired after over twenty years in the police service, and twelve hours later he opened up Finn McCools, working with his family to build a successful financial future for them all but the dream was turning into a nightmare. Son Brian is the head-chef and king of the kitchen, but he seems stressed-out and uncooperative. Other son Jason is ‘Hiding in the bar’ according to the narrator, while Jason’s wife Melissa is a waitress with little to do but mediate Jason and Brian’s argumentative banter. Finn McCool’s has gained a local reputation as a place with unimpressive and often greasy fare, and Buddy is desperate to turn his failing financial future around.

Throughout our introduction to the family, Brian is portrayed as the grit in the ointment, the main problem impeding the success of the business and it’s true that his heart is not in it. Careful editing sees Buddy call him ‘A short-cut chef’, due to his enthusiasm for time-saving work methods and also ‘Arrogant’, while Brian admits that he ‘Doesn’t want to go down with a sinking ship’. The family is in turmoil, but there’s more to Brian than meets the eye as we’ll later find out. Can the chef that turns the airwaves blue, and the faces of his victims red, help these Irish eyes smile again before it’s too late?

On his way to Finn McCool’s Gordon is amazed by how deserted the streets of Westhampton Beach are in February, it’s not a high-traffic area. Gordon describes the restaurant as resembling a ‘Funeral Parlor’ and ‘Grim’ in his customary poor appraisal of the exterior of a restaurant before he meets the Mazzios, who take the opportunity to place the blame for the majority of the problems at Brian’s feet due to his lack of cooperation with Buddy. Brian’s sure that his spring rolls will sweeten up the chef, but Melissa returns with ‘Not a big hit’ and Brian’s flabbergasted at the lack of enthusiasm for his spring rolls, honestly the spring rolls – it’s a real shock for him.

Things only get worse, the salmon is drenched in balsamic vinegar, ‘Always the sign of an insecure chef’ Ramsay tells us in a confident whisper, that’s how confident he is of this fact, he can even whisper it with oodles of confidence. The Shepherd’s pie is the finale, but greasier than a roadside hot-dog of advanced maturity that you regretted buying for two days afterwards. For Gordon’s gourmet stomach it’s too much, and he rushes to the bathroom to throw up. The post mortem sees Brian unrepentant about making Gordon literally puke, he knows that he’s good at what he does and that’s it. Ramsey invites the local Firemen around for a meal, after convincing them the restaurant isn’t still just ‘All fried food’, and after facing down the formidable frowns of the fire-fighters he’s ready to face Finn McCool’s kitchen for a serious inspection.

With much finding of unidentified foodstuffs in dark corners of the kitchen, the occasional ‘Oh my God’ and the inevitable outburst of swearing or ten, Gordon finally declares that Finn McCool’s isn’t a Kitchen Nightmare, ‘It’s a kitchen disaster’. He suddenly discovers a copy of his own book and with a rare smile jokes ‘At least there’s something clean in here’, but it’s the only smile seen all day. After a deep cleaning session involving the whole family, somewhat reluctantly in Jason’s case as he doesn’t ‘Go in there or cook in there’, the family are ready for the firemen, but even with Ramsay’s presence, the food is roundly criticized and the reception from the firemen is unanimously critical. They leave with their negative opinion of Finn McCool’s firmly re-established, and the next day Gordon shows Brian his own version of shepherd’s pie. Brian and Gordon have a shepherd’s pie-off of sorts, but the family are blown away by Gordon’s version and Brian takes such a complete loss badly.

Brian leaves Buddy to do the cooking for an evening, and the experience gives Buddy the chance to experience the stresses of Brian’s job for himself. The service that evening is a disaster, but Buddy learns a new appreciation of how well Brian manages things. Gordon gives Brian a rousing pep talk and motivates him to be appreciated even more by being totally committed to serving excellent food. With a bit of Gordon Ramsay magic, in the form of one of his subtle but amazingly effective makeovers, the restaurant looks brand new, spacious and better than ever before. A huge new sign outside finishes off the smart look of the place and Gordon and Brian work on a brand new menu that helps spread his workload by introducing a table-service style to the restaurant.

Gordon’s final miracle is to once again talk the firemen into coming back one more time, for the re-launch of the business. The place is crowded and the local paper’s food reviewer has turned up, but Brian is overwhelmed in the kitchen and both the food critic and the firemen are kept waiting over an hour. The fireman rush off to tackle a blaze or just have some cheese toasties back at the station, but the food critic sticks it out and waits in the bar until she finally gets to eat, and it’s a meal that she is clearly impressed with. There’s still a lot of work to be done but Gordon leaves Finn McCool’s glad that he’s helped the family pull together, and confident that they’ll get the success they deserve.

Finn McCool’s Now in 2018 – The After Kitchen Nightmares Update

Buddy’s financial problems were severe in February 2007 when filming took place, but by the time the show aired in November of that year the restaurant was thriving. I found several hugely positive reviews of the place from critics, fans of the show and locals that clearly illustrated that Kitchen Nightmares was Finn McCool’s lucky charm when it came to success. Buddy also commented about a few of the deceptive editing practices that the shows producers had used to exaggerate the tension between the family, and he was also keen to put it on the record that the long waits for customers that we saw only occurred due to the shows producers over-booking. It’s clear that there were some drama-heightening moments that the show engineered, but to what extent is probably not important now.

Either way Finn McCool’s was left in a far more secure financial footing, but unfortunately, despite the restaurant’s success since the show Buddy was forced to sell the restaurant in 2009 due to lease problems, it’s hoped that he got a good price for the sale considering it’s recent success and the amount of his own money he had put into it. The Mazzio family continued to work in Finn McCool’s after the sale but in 2012 that long, deserted winter season finally saw Finn McCool’s join a number of other local restaurants that had been forced to close. After that the building was boarded up in a sad end to the formerly friendly place.

Brian and Jason have both remained in the industry since the closure of Finn McCool’s, and Brian’s claim that he was great at what he does was perhaps verified a little when he won a ‘Best Chowder’ in a Chilli and Chowder Competition. In 2011 Brian took on the responsibility of opening a Shuckers Lobster and Clam Bar in partnership with childhood friend Patrick McCormack, and now he can get to appreciate the problems that used to face his dad Buddy, back when Finn McCool’s was the family business.