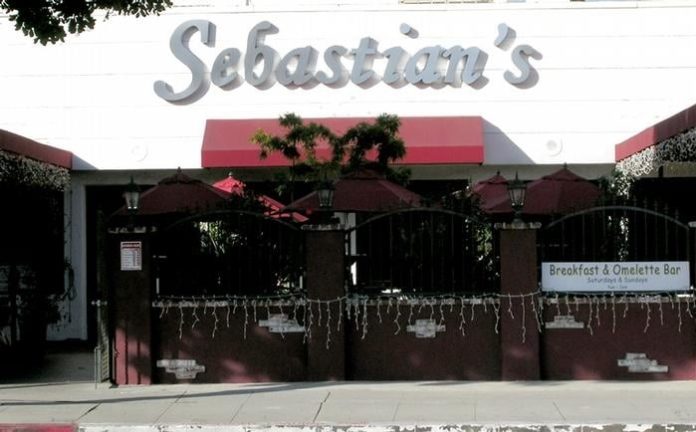 In November 2007 Sebastian’s, a small eatery in the Toluca Lake area of Los Angeles, got the Kitchen Nightmares treatment. The episode had more fireworks than the fourth of July and it finally looked as if Gordon Ramsay’s in-your-face style of giving advice was going to explode into a fist-fight, as he continually butted-heads with the stressed-out and similarly explosive personality of Sebastian Di Modica, the owner of the beleaguered restaurant.

There’s plenty of skill, knowledge and training involved in becoming a World renown chef, but lets be honest here, it’s not rocket science, and it’s not often that Gordon Ramsay comes across a menu that you would have to be a rocket scientist or a brain surgeon to understand. But Sebastian’s boasted a mind-dizzying array of choices and options that were so complex that even the waitresses couldn’t quite agree on how many gourmet combinations there were. Business at Sebastian’s was worryingly slow, and it’s owner knew that within a matter of months it would be time to close the doors for good, that is unless everyone’s favorite restaurant guru and generally angry person Gordon Ramsay could save the day.

Sebastian Di Modica is a ‘part-time’ actor, there’s a movie credit on IMDB for a film he was in back in 2000, and this being Los Angeles it’s no surprise that most of Sebastian’s staff are in the entertainment industry and just waiting for their big break. Sebastian is known for his sometimes extreme mood-swings and he gets through a lot of employees, in the last year alone he’s fired fifty people which means that he must consistently have at least one member of staff who’s struggling through his first week, probably staying up late every night trying to learn the infinite permutations of the menu. It’s no wonder that Sebastian, who assures us before Gordon’s arrival that he doesn’t take any (Bleep) can’t seem to keep his staff happy. And by the way, all credit must go to the guy who edits the beeps in for this episode, if he gets paid by the hour then he must have been racking up the overtime earnings like crazy.

When Gordon first arrives at Sebastian’s he considers it a bit ‘tacky’, but after meeting Sebastian himself Gordon attempts to come to grips with the menu concept. This is Sebastian’s pride and joy, he endlessly re-iterates how special and ‘unique’ it is, but Gordon looks like he’s losing the will to live as Sebastian explains the overly-complicated concept to him a third or fourth time. Still unable to grasp the technical specifications of the uniqueness of the menu fully, without at least borrowing a computer off of NASA for a weekend, Gordon finds fault with the pictures on the menu. ‘Did you take these yourself?’ he asks Sebastian, who somewhat proudly admits the pictures were his, ‘They look ghastly’ replies Gordon, and by now the bleep guy is starting to get busy.

Gordon orders the calamari, after checking with Sebastian that it was fresh. Perhaps it was panic, perhaps it was desperation, but for whatever reason Sebastian decided to blatantly lie and claim it was fresh. It didn’t even take as long as Gordon receiving the dish and pulling that special face that means he’s utterly disgusted by the filth that he’s eating, before the big lie was discovered, as Gordon asked the same question of waitress Sonja, and this time got an honest answer. Gordon isn’t happy, in his mind Sebastian is not only a (Bleep) chef, but he’s a dishonest one as well

Tensions increase as Gordon asks Sonja if he could have a sick bag and she relays the message back to Sebastian, who fumes for a while over the comment. We see Gordon tucking into his speciality pizza and we hear Sebastian talking to his parents on the phone about Ramsay’s ever-growing unwelcome presence, Sebastian’s dad advises him to throw Ramsay out, but fortunately relations between Sebastian and Gordon haven’t deteriorated that far yet. The cold war between them does get a bit chillier when Gordon complains that his pizza base is ‘soggy’, and when Gordon receives his New York strip steak things become positively icy, with Gordon describing the dish as resembling dog food, which to be honest, it really does.

We move on to Gordon and Sebastian’s meeting about Gordon’s first impressions, there’s a lot of bleeping and waving of arms as the two tussle over calamari-gate, before the soggy pizza comes up. Gordon is amazed Sebastian is using frozen pre-made dough for his ‘speciality’ when he boasts ‘wood-burning ovens’ as a major selling point of his pizzas. The most incredible moment comes when Sebastian reveals his plans to franchise the Sebastian’s model across the World, which leads Gordon to explode with ‘You can’t even get one restaurant right’. Gordon rants outside for a bit, where there’s either a car alarm going off or one hell of a lot of swearing judging by the constant beeping.

The next day the fireworks continue, Gordon is shocked to discover that virtually everything is pre-made, frozen and defrosted in a microwave while the pizza ovens lie cold and unused. Sebastian decides to show his intuitive brilliance in the kitchen by dislodging chef Lou, who generally seems to hold things together in the kitchen. The result is $300 dollars worth of food comps that night, with one salad returned with an extra hair that the customer didn’t order and that she was most definitely not happy about. Sebastian escapes to ‘chill out’ with some friends out back but Gordon soon brings him into the heat of the kitchen where he condemns the pre-made mashed potatoes, criticizes Sebastian’s hands-off style of management as unprofessional, and finally gives a solid verbal pounding of Sebastian’s cooking abilities, labelling him a ‘fake chef’ amongst a fast rate of bleeps that you would probably dance to after a few beers.

The next day sees Gordon propose a new menu, something more conventionally comprehensible, a menu that people can understand without having at least two degrees in advanced rocket engineering. The staff look pleased, they all think it’ll make everything smoother. Sebastian is less happy, the new menu isn’t ‘unique’, and he looks like a man who’s just watched his house burn to the ground, but it’s not all bad news. The staff get some professional tuition to learn pizza dough tossing and the wood-burning ovens are fired up to cook the new range of genuine wood-oven cooked pizzas. The restaurant gets a brand new state-of-the-art dough mixer, and it also gets a makeover that’s topped off with a red carpet to welcome guests on the night of the relaunch, which also happens to be Academy awards night.

Sebastian’s new look and menu is a big hit with customers, no table is free and everything is going swimmingly, but Sebastian, in a decision that is beyond my ability to comprehend, decided to revert back to the old ‘concept’ menu a few hours into relaunch night. The result is utter chaos in the kitchen and confusion throughout the place. In an inevitably bleep-filled series of showdowns Gordon and Sebastian shout, provoke, insult and verbally abuse each other, at one point Sebastian is seen throwing the camera crew out of the building in a blinding rage. After a while Sebastian appears to calm down and returns to the kitchen where for once he runs things smoothly and without major incident. Gordon leaves Sebastian’s with things on a more stable financial footing and reserves his biggest praise for Lou, who has probably stopped a disgruntled employee from tipping Sebastian into the pizza ovens on more than one occasion.

Sebastian’s Now in 2018 – The After Kitchen Nightmares Update

Perhaps unsurprisingly, before the dough mixer even had chance to get warmed up, Sebastian was fishing the old concept menu out of bins and re-introducing the unique and immensely confusing old way of ordering food to his once again dwindling customer-base. In January 2008, just two months after his appearance on Kitchen Nightmares Sebastian was e-mailing everyone on the restaurant’s contact list to announce the closure of the restaurant that bore his name, apparently as he and wife Nichole were moving back to Boston. One of Sebastian’s long term employees, which is anyone who lasted more than a month with him, re-appeared later as a head chef in the Kitchen Nightmares at Casa Roma episode, and he revealed that Sebastian had just disappeared abruptly. Sebastian got a second film credit in 2013 after playing a detective in ‘Angel’s Around Me’, which is rated at 2.9 out of 10 on IMDB, and the part-time actor and one-time restaurateur is now apparently running a landscaping company, and you can be sure he’ll be offering lots of unique landscaping deals to his new customers.

A review of the restaurant from a Kitchen Nightmares obsessed fan, who managed to pay Sebastian’s a visit in the brief time between the episode being aired and the restaurant closing was filled with a litany of complaints, not only about the poor quality of the food, and the confusion caused by the re-introduced concept menu, but also the general wear-and-wear of the building. The poor maintenance and condition of the restaurant was a common complaint echoed by many, with one reviewer calling Sebastian’s ‘Definitely unique, uniquely grubby’.