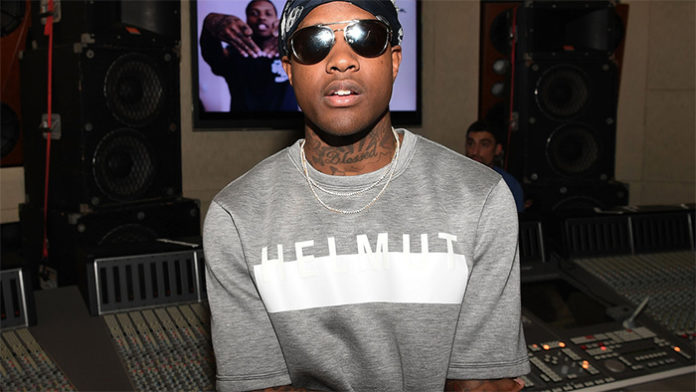 A member of YSL, Lil Duke has churned out a number of tracks over the past few years including, With That, Slime Shit, and Peanut Butter Jelly (PBJ). As for multi-track projects, has dropped three mixtapes, the self-titled Lil Duke, Hit Hard Move Silent, and Uber, the last of which was came out in 2016. According to reports, the rapper is currently working on his fourth tape, which is to be released on November 28th, 2017. Considering what he has managed to deliver so far, it will most likely give rise to a number of additional hits- the countdown to its release has begun.

A frequent collaborator, the twenty-something has worked with a number of artists since his debut including Gunna, Chief Keef, Young Greatness, Young Thug, HoodRich Pablo Juan, to name a few. In fact, he recently teamed up with UnoTheActivist on the track, Yamaha, which has already racked up hundreds of streams online. With the way things are going, he’ll most likely attain greater success in the near future, as he continues to dish out new material. With all that said, how wealthy is the rapper? How rewarding has his career been? According to sources, Lil Duke currently has an estimated net worth of $300,000.

Where did he make this kind of money from? Aside from record sales, what else does he have going for it? Let’s explore all of these questions below.

How did Lil Duke Make His Money & Wealth?

Hailing from Tennessee, Lil Duke presumably got into rap music in his teens. Unfortunately, not much is known about his early life at this time. Having said that, we do know that he joined the Young Slime Life movement headed by Young Thug sometime over the past couple of years. Ultimately it is with the group that he first delved into the world of hip-hop.

In 2015, the aspiring rapper released his first solo project, Lil Duke as a digital download. His debut mixtape, it featured a number of guest appearances from artists such as Young Thug, Travis Scott, PeeWee Longway, and Offset, among a few others. A considerable hit, especially for an initial release, it boasted a number of tracks including Most Wanted, Stay Focused, Pass Me The Lighter, and On My Vibe.

Striving to make himself known in the rap realm, Lil Duke eventually released his second mixtape, Hit Hard Move Silent with a few month’s time. Similar in terms of style to his debut effort, the playlist included a number of titles such as, Peanut Butter Jelly (PBJ), No Buster, New Wave, How To Adapt, and Destroyed, all of which were collaborations with other rappers. Made available for streaming, the playlist has already racked up close to 200,000 streams online.

Then in 2016, he issued his third mixtape, Uber, which was inspired by Young Thug’s track, With That. Produced by Ricky Racks, London on da Track, Isaac Flame, and Wheezy, it showcased a number of crispy beats. Filled with thirteen tracks, the project gave rise to Whole Lotta, Know Ima Get It, Know Ima Stunt, Change Your Life, Grew Up Around Violence, and Paid & Full. Among those who were featured in the tape were Lil Yachty, Gunna, 21 Savage, Anthony Hamilton, and Dolly. On Hotnewhiphop.com, the tape has already been played more than 89,000 times.

Since then, Lil Duke has dropped two additional albums, Blue Devil in 2016, and Life in The Hills in 2017. A few highlights from the two projects include Waiting On Me To Fall (Feat. Casper), We Get It (Feat. Trae Tha Truth), Better Days, Settle, and Blue Hunnids. On the Internet, the tapes have already been streamed thousands of times. But there’s more- the last that we heard, he was preparing for the release of his next mixtape, Uber 2, which is to be released sometime later this month.

Obviously, Lil Duke would have pocketed a fair amount from the above releases- having said that, it’s hard to figure out the exact sum at this point. With that said, the rapper likely has other sources of income (as do most artists). For instance, it’s not uncommon for artists to put on concerts and shows to rake in some extra cash. While the rapper hasn’t had the opportunity to go on tour as of yet, he has put on a few performances over the past few years; for instance, he held a show in Denton, Texas back in 2015. With the rate that his popularity is climbing, however, a tour in the near future is definitely a possibility!

As far as we know, Lil Duke is not married. In fact, it would appear that he is currently single. As soon as we know more about his dating status, we will update this section.

Does Lil Duke Have Any Children?

No, Lil Duke does not have any children that we know of.

Did Lil Duke Go to College?

No, Lil Duke has not gone to college. In fact, not much is known about his education history at this time.

What is Lil Duke Famous For?

Lil Duke is perhaps best known for his affiliation with Young Thug and his membership in the supergroup, Young Slime Life. Since his debut, he has released a number of albums, all of which have garnered him a considerable amount of attention.

Where Does Lil Duke Live? Pictures of Lil Duke’s House

According to his Twitter bio, Lil Duke currently resides in Los Angeles, California. We do not have any pictures of the rapper’s house to share at this time.

What Kind of Car Does Lil Duke Drive?

At this time, we do not have any information on Lil Duke’s vehicle.

How Much Money Did Lil Duke Make Last Year?

We do not have any information on Lil Duke’s 2016 earnings at this time.

As mentioned earlier, Lil Duke recently released the mixtape, Life in the Hills this spring. Among its contents were the tracks, Better Days, Every Night, All Night, Light My Blunt, and Show Me the Way. In terms of collaborations, he has also worked with Chief Keef on Smoked, with UnoTheActivist on Yamaha, and Young Greatness on Bloody Summer this year.

On November 28, 2017, he will be coming out with a new album titled, Uberman 2, which will contain fourteen new titles, some of which include, Single Asf, Get in My Bag, Melrose, If I Wanted To, Shooters, and No Love.

If you want to stay up to date on what’s going on with the rapper, be sure to follow him on social media. For instance, you can catch him on Twitter at @YslDuke.