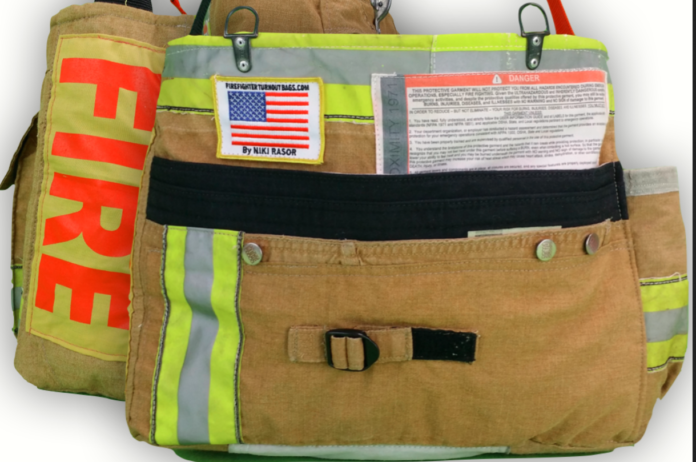 Firefighter Turnout Bags came about when Niki Rasor was asked to modify her firefighter husband’s jacket. He asked her to remove a pocket from it, and not wanting to waste the fabric, Niki made a purse from it. When she wore the bag in public, she got many comments on it, and the business was born. Once she got in it seriously, she and her husband made almost $200,000 by selling the bags. Let’s see if the Sharks would be as impressed with these bags made from the coats right off the firemen. 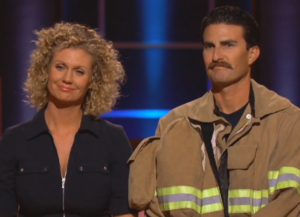 Niki and Matt Rasor walked out onto the stage and into the Shark Tank. Matt was fully decked out in a firefighter uniform, and he had another firefighter with them.Niki stated that her company was Firefighter Turnout Bags, and she was on the Shark Tank seeking a $250,000 investment in exchange for 33% equity in her business. Matt explained that he had been a firefighter for 13 years, and always wore the typical gear. He said that it protects them from the dangerous elements that they face while doing their jobs.

Matt explained that each firefighter was issued two sets of gear that they used for 10 years. Those two sets were then turned in, and the firefighters would receive two new sets. That creates a unique problem for the fire departments – what to do with all the old gear. Niki said that Matt arrived home one day with his turnout coat, and asked her to remove a pocket on it. Not wanting it to go to waste, she made a purse out of it. When she wore it outside, Nikki got multiple comments from people asking where they could buy one.

Niki stated that that’s how firefighter turnout bags was born. Now, they made all types of different bags with the different aspects of the turnout coats.Niki asked the Sharks which one of them wanted to be the hero for her and make a smoking hot offer. This got laughter from all of the sharks.

Lori asked if she could see some samples, and the female firefighter that was on stage with the husband-and-wife duo starts to pass them out. As she did so, Niki did a little end zone dance and chanted that she was on Shark Tank. Robert told her that they did the same dance every time they did the show.

Robert asked her how long it’d taken to get on Shark Tank, and Niki told him that it took her years. She said that she appreciated that lesson because it taught her that she was on her own in her business. Robert agreed with her, telling her never to take the first no.

Kevin asked Niki how she planned on scaling the business. He reminded her that if she did a good pitch, and people like it, Firefighter Turnout Bags could end up with tens of thousands of orders. He asked her how many suits she was getting after the firemen system. Niki smiled at him and told him that firemen don’t want to throw these things away. Before she came along, many of the suits were ending up in the landfill. Niki said that she got calls every day from fire departments asking her to take their old gear off their hands.

Daymond inquired about costs, while Mark wanted to know how and where she made her bags. She explained that her business was in her basement. They had a factory, but it ended up being too overwhelming for her and she downsized. Unfortunately, Firefighter Turnout Bags did not downsize with her. Niki said that she now needs to get back to the warehouse. Robert asked her why she wants to do that, and she told him that she didn’t know what she didn’t know back then. She was much wiser now, and she could take advantage of having that space.

Niki admitted to making many mistakes, at a high cost to her and her business. Lori repeated Damon’s question about cost, while Kevin wants to know how much they’d made of the previous year. Niki’s husband said that they’d made hundred and $94,000, and profited $70,000. Mark Cuban wanted to know how much of their own money they’d invested, and Matt said that it had all been sweat equity.

The Sharks are talking over each other. Robert raised up the bag he was holding and asked how much it costs. Niki told him that the average bag is $130. The bag cost her $60 to make. Robert asked how much the duffel bag cost, and she said it was $330. It was a much larger bag. Kevin seems shocked at the high value, and he said that he smelled a need for capital. He wants to know what they had borrowed, and Niki told him that they’ve taken out a couple loans. She said that one of them had been alone for $20,000, and she now owed $30,000 on it.

Kevin informed her that that was 50% interest, and Niki said that she didn’t regret doing it because she needed the money. Kevin told her that she was a wonderful lady with a good business, but she needed a manager. He thought that someone needs to come and take over the day-to-day operations. Niki smiled at him condescendingly. Kevin told her that he didn’t think of her as a great manager, but she was a good designer. Niki claimed that she was a slamdunk manager and every employee that she had loved their job.

Kevin said that he’s heard her story, and it was very compelling. He told her it was very hard for him to understand how to deploy $250,000 and get it back. Robert said that something wasn’t adding up for him numbers wise. He said that if she had made $70,000 last year in profit, he didn’t understand why she had to take a $40,000 loan now. Matt explains that they’d had to double their payroll.

Lori wants to clarify that Niki would be re-creating the look of the bags with regular fabric. Niki explains that it would be the same fabric that the firefighter suits were made from, just on a roll instead of a premade suit. Kevin told her that that was a very dangerous place to go, and she tried talking over him. Kevin explains that the back he was holding fought fires, and that’s why he is a customer would pay $300 for it. Matt explained that they would manufacture both, and Niki described as knocking herself off. The savings would pass on to the customer.

Kevin said that people would be more compelled to support her because she was supporting firemen. Mark said that it was a fine line to walk. Niki tried to say that people were already doing it. Daymond said that the bag was great, from the design to the way that she sewed it. He could see people paying the money for it. Daymond said that she had the potential to be a great manager, but that would require him sending a huge team in to ship the product, and do the bookkeeping. He said that at this stage that the business was then, it was hard for the Sharks to invest in. He said that he had to be out.

Robert said that he agreed with Kevin, stating that it wasn’t that it looked like a fireman wore it that was the selling point, it was the fact that a fireman actually wore it. Niki said that he was missing the point. She had been to trade shows, and there is another guy that was making similar bags but knocked off. She asked why he could knock her off, but she couldn’t do it to herself. Mark Cuban seems to agree with her, stating that lots of businesses had a premium brand and a less-expensive version. Kevin asked where she would get the money to do both, and Mark said that that was a different issue.

Niki was getting huffy at Kevin’s attitude. Mark told her that she had done great things so far, but she was really a product, not a brand. He viewed that as the main challenge. Mark went out. Kevin explained that he was also unable to invest in fireman’s turnout bags. He said it wasn’t because she wasn’t terrific, but it wasn’t structured to take $250,000 at the moment. Niki complained that Kevin was just like all the banks that had rejected her. Kevin attempted to reason with her, stating that he was an investor and not a bank. He told her that a quarter of $1 million is a lot of money and she wasn’t ready for it. Niki sarcastically told him that she respected his opinion.

When Kevin went out, Niki turned to Robert and asked what he thought. Robert said that he was all in on the authentic fireman bags. That was a part of the business he liked because it was so hard to find something that was authentic these days., But he loved the business. He would be willing to pay her $500,000 in order to take over the whole thing. Niki looks like she didn’t know how to respond. Lori also wasn’t out yet.

Lori told Niki that she saw her vision of having the premium brand of bags made from the actual firefighter jackets, as well as the less expensive version just made from the fabric. Lori wanted to run most of the technical parts of the business, while Niki acted as the designer. She offered Niki $250,000 in exchange for 50% of the business. Niki took a minute to compose herself and was about to ask a question when she realized what she had to do. She ended up taking Lori’s offer, stating that she liked that Lori saw her vision. Let’s take a look at how that ended up working out for her after her appearance in the Shark Tank. 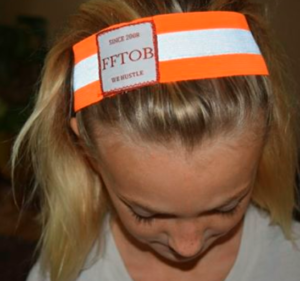 Firefighter Turnout Bags has started to offer the cheaper, imitation bags made from the new material as opposed to the ones right off of the firefighter’s backs. In addition to the bags, there are baby bibs, a baby blanket, a zipper clutch, as well as a backpack. It looks like each bag is a one-off as they test the market. Niki is also selling and making headbands out of the reflective material off of the firefighter jacket.

Niki is also taking custom orders through her website. In December 2017, she posted a very special custom order made from a customer’s World War II uniform on the business Facebook page. There were four bags in total, and she said that there wasn’t a dry eye in the house when the customer picked them up. It looks like both Niki and her business are thriving since the Shark Tank episode. Take a look at their website by clicking here.