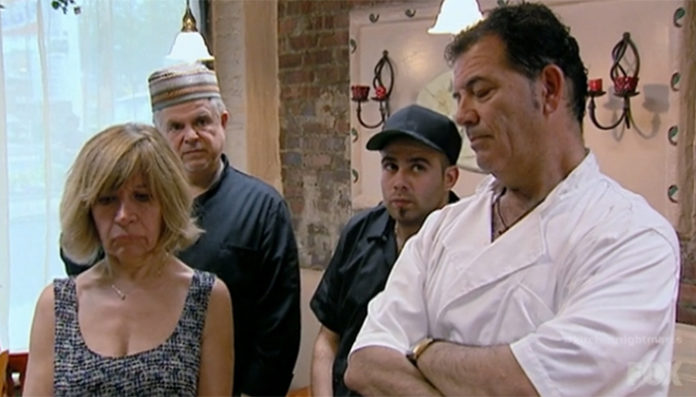 Located in Flushing, New York, Kati Allo is a Greek Restaurant owned by husband and wife, Manny and Christian. As it happened, he had decided to buy the store on a whim, upon learning that it was for sale in the early 2000’s. Ever since, the couple has been spending much of their time at the restaurant, which is obviously taking a heavy toll on their marriage (especially after their kids left the business).

Distraught by how the business is falling apart, the two eventually seek help from Gordan Ramsay on his show, Kitchen Nightmares.

Having arrived in New York to help the couple, Gordan makes his way to the restaurant, where he is quickly greeted by one of the owners, Manny. Not long afterward, his wife, Christina also exchanges greetings with the celebrity chef.

Wanting to catch up on the state of the restaurant, the three decide to sit down for a chat. With that, it doesn’t take long for Gordan to learn that Manny had bought the business on a whim, much to the dismay of his wife, fourteen years ago, despite having zero restaurant experience under his belt. As the trio continue to talk, it’s quickly obvious that there is friction between the couple. In fact, Manny reveals that Christina had in fact, filed for divorce, in the past.

Putting the owners’ marital problems aside temporarily, Gordan decides its time to try Kati Allo’s food. Seated at one of the tables in the dining area, he is handed the menu by one of the waitresses, Irene. Taking the opportunity to learn more about the restaurant, he asks her about what she thinks is wrong with the business, to which she replies that the owners are constantly butting heads- a situation that’s “only getting worse and worse every day.”

Flabbergasted, Gordan simply nods before making his order- The Pastitisio, Gyro Platter, and a dish of Grilled Pork. With that, Irene goes back into the kitchen, leaving the chef alone in the dining area to admire the “hideous” decor.

The first dish to arrive at his table moments later is the Gyro Platter with Lemon Potatoes. Almost immediately, he questions whether or not the food is fresh- to which Irene replies that it was previously frozen.  Finally giving the Gyro a taste, it’s quickly obvious that he’s less than thrilled with the meat. An “embarrassing” platter, he eventually sends it back into the kitchen, to the dismay of the owners.

Next to arrive is the traditional pork sausage, which is served on a bed of lettuce. Despite the chef’s best efforts, however, Gordan is quickly displeased with its lack of flavor and abundance of grease. Unsurprisingly, it becomes the second dish to be returned back to the kitchen.

Finally, the Pastitsio arrives. Much like the previous dishes, however, it too, proves to be a disappointment. “Like a bland pile of worms”, its steamy center quickly confirms Gordan’s suspicions that the plate, was indeed, microwaved in the kitchen.

With the tasting of the food complete, Gordan eventually calls all of the staff out to the front for a discussion. At loss for words, the celebrity chef isn’t shy about letting them know that everything he’d received was a total disappointment. Despite Gordan’s criticism, however, Manny stands his ground, insisting that his food is not as bad as he describes it to be. Upon further probing, the chef learns that the restaurant had switched to using frozen foods just a year prior.

Following the discussion, Gordan leaves for a much-needed break, prior to returning in the evening to witness the dinner service. Heading right into the kitchen, he is quick to notice the owner’s flawed method of cooking the grilled chicken. Unsurprisingly, customers in the dining area soon begin to complain of dried-out meat.

To make things worse, dishes for the restaurant’s special soon arrive microwaved from downstairs. With so much food coming from underneath them, he can’t help but go down to investigate. Making his way through a cramped staircase, he arrives in the secondary kitchen, where he’s appalled by the lack of cleanliness around the ingredients.

As he makes his way into the food refrigeration unit, his disgust only grows as he discovers more and more rotten ingredients. Making his way back up to the main kitchen, Gordan confronts the owners about what he’d found downstairs.

Next, Gordan heads to the owners’ home to see if anything can be done about their marriage, which is obviously hanging at the seams. Following a lengthy heart-to-heart talk, during which many tears were shed, the owners agree to work on their business and relationship together. With newfound determination, they promised to do their best to save the restaurant.

The following day, Gordan introduces a new sea bass dish for the restaurant. Served with a side of cauliflowers, the owners are stunned at the flavors coming from the fish. Having tasted the dish, the two subsequently tackle the recipe in the kitchen, to much success.

With Christina and Manny wholly committing to each other once again, Gordan and his team work overnight to transform Kati Allo’s interior into something extraordinary. The next morning, the staff is overwhelmed by the positive changes made by the chef and his team. Moved to tears, Christina can do nothing but stare at the new decor at awe.

Later that day, the restaurant’s relaunch proves to be a success. Not only does the food come out in a timely manner, but the diners are also more than happy with the dishes- especially the grilled sea bass. Despite this, however, Manny eventually becomes overwhelmed with orders 45 minutes into the service, which ultimately leads him to walk out.

After a much-needed cool-off, he returns to the kitchen. Almost immediately, things begin to fall back into place. In the end, Kati Allo’s restaurant ends up being an overall success.

Kati Allo Now in 2018 – The After Kitchen Nightmares Update

Following Gordan’s visit, Kati Allo received more customers for a period. Before long, however, business declined, which ultimately led them to close their doors permanently in April 2014.

Today, their old location has been taken over by a new Greek Restaurant called Kalamaki NYC. Opened in the summer of 2014, it appears to be doing well, with decent reviews across online sites.

Since the closing of Kati Allo, it’s unclear what the owners have turned their focus upon. In fact, they still have Kati Allo listed as their workplace on Facebook; as far as we can tell they haven’t even updated their social media pages.