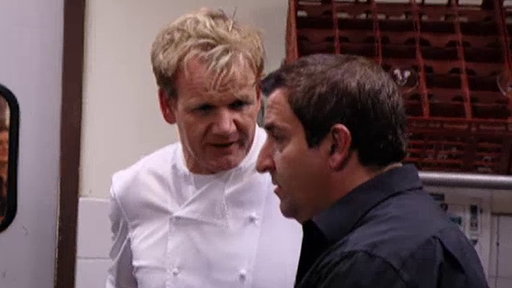 Owned by “Sammy” Sabatiello Settembre, Sabatiello’s is an Italian restaurant whose owner is over $1 Million in debt and is based in Stamford, Connecticut. By the time the crew appears, Sabatiello’s is only a few months from closing. It appears that Sammy’s ego is quite large as he finds nothing wrong and willingly attacks customers for complaining about the subpar food. He’s also exceedingly rude to his own staff, which appears to be a new development over the past year or so. With severe debt and even more severe attitude problems, Chef Ramsay shows up and meets Sammy.

Upon Chef Gordon showing up, it’s clear the décor is quite nice. He’s quickly shown the problem though, as Sammy can’t stop bragging about his own food. He then can’t quit bugging the staff even in front of customers. Gordon then orders a sampling of the foods including the lasagna, steak, and wedding soup. The soup comes out poorly, and Ramsay quickly tells him the truth about his so-called “soup of the day” which was cooked yesterday. Sammy starts to complain about Ramsay’s opinion. The lasagna doesn’t look promising out of the microwave either. It is so bad in fact that Chef Ramsay says if it’s homemade he’ll “Dance in the restaurant stark bollocks naked”. Lastly, the steak comes out and it’s unseasoned, greasy and tough.

After the disappointing sampler, Ramsay meets the chef and Sammy. He quickly finds the lasagna is frozen and Sammy gets confrontational. Regarding the steak, Sammy blames his lack of funds on getting worse cuts. Sammy is clearly delusional, and overly aggressive, trying to start a fight with Ramsay and then asking why no one has shot him yet.

In inspecting the kitchen, things appear to be spotless starting out, but the shelves show cooked food and raw food right next to each other, and some odd prebaked food which is a health issue. Sammy then tries to parrot him after he realizes Ramsay is right, and Ramsay returns for the second night to check out the dinner service. Sammy starts out incredibly confident, but the Jose the head chef shows the real issue; While Jose wants to use real, fresh ingredients, especially on the crab stuffed fish special, Sammy decided to buy imitation crab instead. Ramsay takes an aside to state that perhaps this place should fail.

What happens next is a bit of a surprise to all. A customer complains about undercooked lamb and is given a microwaved dish. The customer sees the scam for what it is, and Sammy bullies his way through to the customer. He is quickly caught in a lie and tries to turn it around on the customer, making himself look the idiot and causing other customers to complain. As an added bonus, the crowd cheers when it is properly brought out, but he makes more of a scene. His girlfriend Lauren tries to talk him into apologizing to the customer but he’s too much on the warpath and shuts down his own location, something that Ramsay would have likely done anyways in short order.

The crowds then walk out of the restaurant and Sammy is trying to play the pity card which is not a good thing. Ramsay then comes in to examine the results, with only 58 tables served tonight. It’s clear Sammy is the key problem, which is addressed. He handicaps the kitchen, harasses the front staff, and uses worse ingredients than could ever be acceptable. Sammy’s response is only “Are you done?” Sammy takes absolutely none of the information. 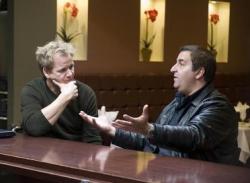 The next day Sammy comes in looking aggressive but tries to keep calm. Ramsay asks about Sammy as a younger man and brings to a slideshow about his family and his past. It’s clear Sammy’s older brother who is now passed was his hero and more a father figure. His original restaurant was also shown, which was magnitudes more successful. Then, a paper clipping shows he is meeting with children and teaching them to cook. It’s clear Sammy had potential, in fact, had success, and was once a good man. After this realization, Sammy promises to try better for the first time in the episode.

As a result, Ramsay is allowed to teach the kitchen staff some new tricks and edit the menu. He also shows the staff how to properly cut and present filet service right at the table. By the time of the third dinner service, there’s a huge crowd waiting to get served. At the start of the night, Sammy seems to be ready to show his kinder side. Even the serving staff seems more relaxed. Very quickly, Jose is getting rushed by Sammy and is making mistakes like undercooking the filet considerably. Unfortunately, Sammy starts flaring up again due to Jose’s mistakes, creating a vicious cycle.

With now a significant time gap to catch up on, the customers are still complaining about undercooked meat. Even Ramsay starts trying to get Jose in line as there are consistent issues. Customers start saying they won’t be coming back, which given third and fourth cooking attempts, makes sense. Ramsay now sees the next issue is the kitchen, which is primarily a communicative issue. Sammy snaps and is supported by Ramsay when he says that Jose has one more chance and things need to change. By the next morning, a menu discussion is had. There is a streamlining of the menu and orients Sabatiello’s as an Italian steakhouse. Despite the previous night’s issues, there’s still plenty of hope that the new menu will be a success.

With only 3 hours to relaunch, Chef Ramsay shows the staff the new menu, and despite having no say in the matter, Sammy loves it. Sammy then talks to Jose and tells him he needs to match the quality, and it’s clear Sammy’s opinion of Gordon Ramsay has turned to one of reverence and he’s taking responsibility for what’s happened before. By the time of relaunch, Sammy is in front of customers and seeming to be cordial. In the kitchen, Ramsay tries to pep Jose up to make sure his cuts and cooking of steaks are on point. It’s clear this is the last chance this place has, but things appear to be turning around in terms of quality. That being said, there is a slow down in the kitchen due to a mass of orders, it’s testing Sammy’s patience. Jose starts to make mistakes again, and Sammy decides to jump in and help Jose with hands-on aid in the kitchen. This turns things a bit more chaotic, and it’s not helping the customers waiting at the table at first, but he is able to right the issues in a few moment’s time. Once the food does make it to the table, the quality makes the wait worth it. After the relaunch, Chef Ramsay praises Sammy for his performance and leaves Sabatiello’s hopeful that the establishment will continue to survive for quite some time. But can you still visit Sabatiello’s in 2017? Let’s find out.

To say that this Kitchen Nightmare Update ended in disaster is truly an understatement. The owner, Sabatiello Settembre, was served with eviction notices not long after the Kitchen Nightmare episode aired in fact, almost a month to the day. Instead of vacating the premises in a civil manner, Settembre had other plans. Namely, blaming “some homeless people” near his shop, and how hard it is to lock the doors of Sabatiello’s, he caused over $20,000 worth of damage to the property, including broken glass and damaged walls. As a result, the owner was charged with first-degree criminal mischief, and booked into a Stamford jail. If this was not already bad enough, he was also booked on grand larceny charges for illegally using credit cards that were not his own for an additional $20,000 worth of damage. It appears he got these cards when he was setting up deposits to fund the restaurants Christmas Party. This was all mere weeks after Sammy had decided to open up a pizzeria over in Greenwich, which was the location of his first pizzeria. The pizzeria, called Sabatiello Gourmet Pizza, appears to still be open and even has current coupon offers from sites like Groupon.