The presentation for Toymail began with the audition tape. Gauri Nauda introduced herself and said that she was from New York City. She explained that she was a first-generation American – the child of Indian immigrants who came to America with just $10 in their pockets. Gauri’s parents ended up buying a failing newspaper and building it back up to a successful business they sold it for a profit in 2007. Gauri went to grad school at MIT and created an alarm clock for a class project that became a viral hit.

The video flashed to a scene of Gauri working at a desk, with pieces of electronics open in front of her. She was drawing a new design. She told the camera that she wanted to make her new project something more meaningful. The scene changes to the entrepreneur sitting in front of the row of kids holding a toy. She told the children that they were the new product testers. Gauri said that she had made a viral product 10 years ago, and she wasn’t sure if she could do it again. She wanted to follow in her parents’ footsteps and become very successful. The videos by saying that he was trying to create an entirely new market and if she didn’t get a deal from the Sharks that would be very difficult. 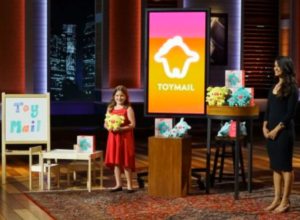 Gauri walked out onto the stage and into the Shark Tank. She was preceded by a child holding one of her toys. She introduced herself and her young friend Ellie and said that she was the founder and CEO of Toymail. She said that she was seeking $250,000 in exchange for 2.5% of her business. Both Daymond and Robert cringed a bit at that valuation. Gauri launched into her presentation, stating that Toymail was all about keeping families close, especially when they were apart.

Toymail didn’t need a phone to accomplish this. They were doing it with the talkies. Gauri picked up a toy from on the stage and explains that children could use it to send a voice message to their parents. Instead of using the phone, they would just press the button on the back of the toy and dictate the message. That would then get sent to a loved one. On the stage, Ellie presses the button on her toy and told her father that Mr. Wonderful had said that it would be fine if she stayed up all night watching Shark Tank. Gauri explained that that message would be sent to parent-approved contacts.

Gauri picked up her phone, and listened to the message, playing it out loud. She explained that the parent, or another contact, could then respond using the app. She dictated a message, which Ellie then listen to by pressing a button on the toy. Gauri explains that everything was completely interchangeable. They could pull out the hardware, and switch toys as the child’s interests change. This seemed to impress Chris Sacca, who was the guest Shark on the episode.

Gauri went on to explain that what she called the talkies were also able to respond to physical play. Ellie shook her toy and is emitted an adorable laugh. Gauri also said that the Toymail product was completely expandable, which means that parents could unlock new features as they wished. The options range from songs and stories to educational content. Gauri ended her presentation by asking Ellie to hand a few toys out to the Sharks.

Ellie complied, and each Shark received a shark toy. They all began to play with them, and Robert kept shaking it to make it laugh. He said that he loved the way it laughed. Lori stated that it was very cute. Kevin asked if it used the home’s Wi-Fi in order to transmit information to the app. Gauri explained that it was all Wi-Fi-based. It didn’t require a phone or laptop to be nearby in order to use the toy. Gauri stated that parents were looking to try and get their kids away from another screen since security was becoming such a concern.

Gauri told the Sharks that Verizon was one of Toymail’s investors. They were very interested since they did not have a cell phone or other device marketed to kids under 10. She said that that was a huge untapped market that Verizon was very interested in expanding on. Gauri said that Amazon was also one of her investors, and they were interested in working Toymail into the Amazon Echo. She explained that that would mean that every one of their toys would be an Amazon Echo machine. Amazon had given Toymail half $1 million.

Kevin asked what valuation Amazon had given the toy business. Gauri explains that it was a $10 million cap. Chris asked her how much money she had raised in total. Gauri explained that she had raised $1.6 million within that $10 million. Chris said that that was pretty high for her first round of financing. Kevin wanted to know what the talkie would retail for, and Gauri told him it would MSRP at $50.

Kevin wanted to know what her costs were, and Gauri told him that it would cost $20 to make it at the moment. When Kevin said that that price would not work for retail, Gauri said that they were bringing it down by about $10 per item to make it more palatable. She said that that would happen over the course of the next year.

Lori asked her what her background was. Gary said that she had a unique background. She had gone to MIT 10 years ago and found it difficult to get herself out of bed in the morning. She ended up in alarm clock called Clockie which would wake you up by jumping off your nightstand and running around the room in order to get you out of bed in the morning. She explained that that product had gone viral, and she’d been able to bootstrap it to $10 million in sales. Robert looks shocked, and Kevin’s first question was if the alarm clock was part of the deal.

Gauri explains that Toymail was a completely separate entity. She thought that Toymail would be way bigger. Robert said that Gauri was the real deal, but he did have a challenge with her business. She was only willing to sell 2.5% equity stake in the business. He was not willing to get out of bed in the morning for that much equity. Robert wished her the best but he was out.

Mark wanted to know what she had told Amazon and Verizon for her three and five-year projections. Gauri explained that next year they were slated to do $2.5 million in sales, with it going up to $10 million in sales the year after that. Mark asked her if she saw the business going to $100 million in sales, and Gauri told him absolutely. Kevin said that he was very impressed even though he’d seen dozens of iterations of plush toys in his years on the Shark Tank. He had the same challenges Robert – he told her it would take five Clockies in order to get out of bed for 2 1/2% equity. Kevin went out.

Chris was up next. He told Gauri that he likes just about everything about her business. He found it impressive that she’d made $10 million from her dorm room at MIT. He told her that the only thing he couldn’t get behind was the valuation. He said it was hard to justify a $10 million for the company that did not have a ton of sales yet. With all that said, he still wanted to make her an offer. Chris offered her $400,000 in exchange for 5% of the company. Gauri thanked him for his offer and said that she wanted to get the best possible offer for her company. Chris said that he was confident in his offer, so she could shop the rest of the Sharks.

Mark Cuban said that he would offer Gauri $500,000 in exchange for 5%. This didn’t change the valuation of the company, but it did increase his equity stake. He also requested some real estate in the toy. Mark said that he didn’t currently have a specific need, but if he had some content in the next couple years he wanted the option to put it into the toy. Gauri said that she would love to have his expertise in the company as well as his content assets. Mark asked her if that was a yes.

Before she could answer, Lori spoke up. She asserted that she was still in the game, and Gauri said that she wanted to let Lori speak. Mark Cuban sat back in his chair. Lori asked Gauri if she had come into the Shark Tank having some ideas of what those specific Sharks could do for her and her business. Gauri told Lori that she knew that Lori had invested in tons of hardware companies, and she was instrumental in distribution.

Lori asked Gauri to come up with a deal that both of them could get excited about. She needs to know that wasn’t going to take forever to see the fruits of her labors.
Gauri asked Mark if he would work together with Lori. Before he could answer, Chris said that he really admired the work that Lori did with marketing and distribution, but insulted Mark Cuban. He told Mark that if he ever came up with a good idea that it would die of loneliness. This got quite the reaction out of the rest of the Sharks.

Chris said that he wanted to give her $600,000 in exchange for 5% equity stake in the company. This actually raised her valuation to $12 million. Gauri looks surprised and waited for Lori to speak. Lori debated but ended up going to deal with Chris. Gauri accepted the deal with both Sharks and walked off the stage looking very proud of herself. 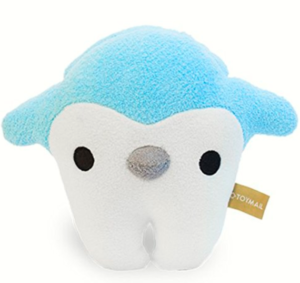 Since getting a deal on Shark Tank, Toymail has added a few talkies to their repertoire. The new plushies, which are featured on the company’s Facebook page, include a penguin, as well as a sloth named Chunk. The toys are still available on the website, as well as Amazon. They are also sold at larger retailers such as Target and Best Buy. Toymail also added a fun new subscription feature. For $2.99 per month, you and your child can access the cloud. This allows for downloading new content such as stories or music. As of November 7, the talkies were featured on the Amazon launchpad. It looks like Gauri benefited greatly by taking the Sharks offer.