Before starting Edn Wallgarden, Ryan was a civil engineer. He worked with railroads and expanding roadways. He decided that his talents could be used elsewhere, and he worked on making a way that people could grow plants, no matter their level of garden expertise. He started his company in July 2014. It allowed people to purchase a beautifully designed gardening system that would allow them to go away for up to two weeks at a time, and come back and find their plants alive and well. When he first opened the company to the public, he got $10,000 in sales in the first five days. Let’s take a look and see if the Sharks will be as excited about the product. 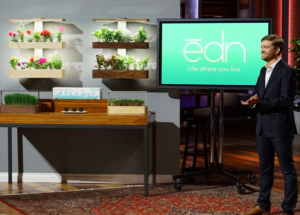 Ryan Woltz walked out confidently onto the stage, and into the Shark Tank. He faces the sharks and introduced himself as from being from Denver Colorado. He said that he was the founder of Edn Wallgarden. Ryan requested $150,000 in exchange for 10% of his company. He declared that his mission with his company was to paint the concrete jungle green. He wanted to change the way that the world grows plants. Gardening required time, attention, and expertise. He stated that even if you do everything right, you can still end up killing your plants. He declared himself a personal expert on that.

He declared himself to be a plant serial killer. He claimed that his product was an intelligent indoor garden system that would help even the most hopeless gardener. He wanted to have a system in place for people who love to be around nature but wouldn’t be good at the nurture part. Ryan claims that the Edn Wallgarden is an intelligent piece of software that automates everything in the plant growing process. They would be able to control the lighting, watering, and plant food. This would allow people to grow plants all year round, from flowers, herbs, to vegetables.

The video behind Ryan showed the process. He narrated as it played. He claims that there is no dirt involved, so you just add plant food, water, and dropping your seedpods. The technology would take care of the rest. It was designed to be an engaging experience that would make gardening fun for the entire family. Ryan said that he would like to handout seedpods samples, and then dive into some questions.

As he passed out the samples, he explained that he brought each of them a seed pod. Kevin asked if they would have to use Ryan’s seedpods, or if you would be able to stick any seeds entered into the system. Ryan said that their goal was to have a great user experience, and so while they prefer for customers to use the Edn Wallgarden pods, users did have the option of using their own seeds.

Lori wanted to know how he saw that Edn Wallgarden was different from Aero Gardens. Ryan stated that Edn Wallgarden had an absolutely beautiful design, as well as the intelligence of the software. He said that they were able to perfect the growth of different types of plants. He said that that was the power of the system. Robert asked him how much each thing cost. Ryan let him know that the large unit was $499, and then this small unit was $99. He calls the small unit the gateway garden. Robert had a follow-up question. He wanted to know how much the subscription service costs. Ryan said this seedpods subscription service was $12 per month, and that included an 82% margin on them. He said that people would be able to get a new plant each month.

Kevin inquired if users would be forced to purchase the subscription service, and Ryan said that they did not. Chris Sacca, the guest shark for the episode, asked if people would be able to choose the plants that they wanted. Ryan said that that was the case. Robert asked if he would purchase it online, and Ryan told him that right now they were exclusively doing direct to consumer online. He saw that putting Edn Wallgarden in big box retail stores in the future.

Ryan explained that last winter they did a campaign where they made $10,000 worth of sales within five days. Kevin said that over the summer he’d been looking for a system similar to Ryan’s because he wanted to grow fresh cilantro. He mispronounced the word, and the other Sharks mocked him for a bit. Kevin brushed it off and continued his thought. He said that there were tons of consumer, small hydroponic labs that were available for purchase. Kevin specified that what Edn Wallgarden was adding was the design field, but he saw some systems as cheap as $40.

Brian said that the design did differentiate his company, but another important component was the technology. He said that the name EDN actually stood for Environmental Data Network. The ultimate vision of the company was to prevent the growth of any plan. Robert said that he saw Ryan needing someone who was as passionate about plants and gardening as he was. Robert said that he wasn’t that guy, and he went out. Ryan told Robert that he appreciated it. Mark was up next, stating that he was in the same boat as Robert. He cited the time that he tried to a grow cactus and it withered and died in the day. Mark went out as well.

Chris Sacca said that the technology part of the business might be so out of the realm of nature that it took the soul out of gardening. He acknowledged that it was a weird thing to hear from the guy who invented Uber. Usually, Chris was the first asking where businesses’ app was, but he didn’t see the need for it with Edn Wallgarden. He said that there’d be a niche for people that would be interested in seeing the data behind the plants growing, but the market wasn’t large enough for him to invest in. Chris went out.

Kevin said that he was intrigued. He said that he thought that he could help Eden Garden Mall get into Target and Bed Bath and Beyond. He just didn’t think that it would happen at that particular price point. He said maybe it would have to be a more dumbed down product. He said that he would do the deal at 150,000 in exchange for 15% equity stake in the business. Kevin asserted that he was so valuable as a Shark that it was ridiculous. Robert looked dumbfounded, and he told Kevin that that was actually a really good offer.

Before Ryan could respond, Lori cut in with a question. She said that she’s traveling all the time, and never got to grow things. She would be interested in the product if Ryan said that she could be away for weeks at a time, and she could come home and have everything not be dead. The lights would stay on, and everything would be watered. She wondered if that was the case, and Ryan said that it was. Kevin cut in, stating that he no longer wished to listen to Lori, and he wanted to hear what Ryan’s opinion on his offer was. Lori said that she wanted to finish, and Kevin insisted that he didn’t want to compete.

Lori said that she was trying to hear what Ryan was saying. Kevin told Ryan that if Lori dropped out, the equity asked going to go up to 25%. Lori said that she was going to make Ryan an offer with the condition. She wanted $150,000 in exchange for 25%, and Kevin said that his offer just went up that much. Ryan stared at him in shock, and Kevin said that Lori had poisoned his deal. Lori said that the reason why she needed so much equity is that she needed to take over manufacturing. She needs to bring the cost down because he would want them in every home, and $500 was not the price point to do that.

Robert told Ryan that the important thing was that he got a deal. Ryan explained that he just wanted to hear everybody out. Kevin said that he had no contingencies, stating that of course, he wanted the price down, and he would help him there, but it wasn’t a contingency. Unfortunately, Ryan would have to pay a terrible price in equity for having forced Kevin to listen to Lori talk over him. Lori pointed out that they had the same offer.

Ryan asked Kevin if he had experience in manufacturing. Kevin asserted that he did, but Lori disagreed. Kevin said that he manufactured several things, including the most ubiquitous Shark Tank product deliverable. He also manufacturers millions of Christmas lights each year. Ryan asked Kevin if you’d be willing to go back down to 15%. Kevin let him know that that time was over. Robert asked why Ryan didn’t take the deal when he had it, and Ryan said that he wanted to hear Lori out. He tried to get Kevin down to 20%. You could see that Lori was getting pissed, and she ended up going out.

Ryan winced, and Mark told him that he learned a lesson today. Ryan took a deep breath and addressed Kevin. He said that he had a vision for eating well garden, and he knew that it would require additional capital. He said that Kevin’s current deal did not make sense for his business out of valuation standpoint. Ryan ended up walking away from the deal. Chris told him that it was an expensive walk down the hallway. Robert said that the thing to come out of the was that he should take a deal that he liked right away. He failed to close. Ryan thanks everyone for their time, and walked off stage. He said that he wanted to take the deal if he would be able to turn back the clock. 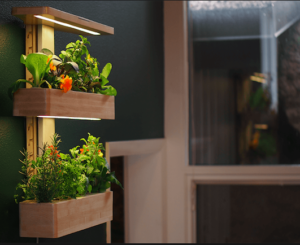 Since their experience on the Shark Tank, Edn Wallgarden has been mostly promoting the small version of the Wallgarden. It is listed on their website as the SmallGarden. These were so popular that they ran out of their initial run, and they are currently taking preorders for the next one. According to their Twitter account, they did have some available for the 2017 winter holidays.

They are also planning the release of the WallGarden in time for the spring season of 2018. In August 2017, Ryan posted on the business Facebook page that Edn Wallgarden would be helping out the victims of hurricane Harvey by collecting donations and shipping them to Texas for free. It looks like this business is still plugging along despite the lack of an investment from the Sharks.