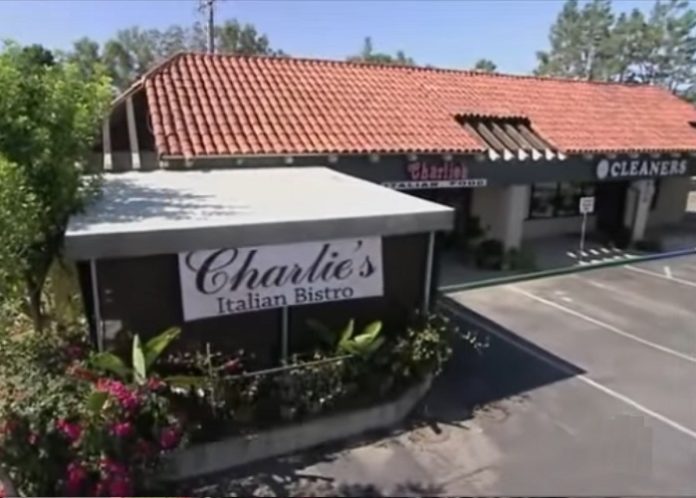 In early 2012 Gordon visited Charlie’s, an Italian restaurant in La Verna, California that was suffering from a variety of problems. The Owner, Tatiana, was a former waitress who took the opportunity to buy the place when it came up for sale, but her dream had turned into a nightmare.

Tatiana had been financed in her purchase of Charlie’s by her mom, Patty, and sister Val, but now both of them faced losing their homes unless Gordon could turn the failing family business around. There was often tension between Tatiana and the staff, who said that she showed them no respect and spent far too much time just drinking wine. On top of that, the staff also admitted that the food was awful, but Tatiana seemed reluctant to do anything to change the way things had always been done.

The head chef Casimiro had been at the restaurant for fourteen years and Tatiana was reluctant to criticize him, believing that he knew what he was doing, but the staff were all of the opinion that he was the reason for the restaurant’s failing’s, and Tatiana wasn’t willing to do anything about the situation, putting all their jobs in danger.

California was experiencing a rare shower of rain when Gordon arrives at Charlie’s, and it’s a good indication of the gloomy personalities of the owners when he meets them. Tatiana is reduced to a fit of nervous giggles when she first meets Gordon, but it’s the only smile we see on her face for the next few days. The tension between Tatiana and her family is clear to see, with Val and Patty both happy to tell Gordon that they think she needs to start changing what’s broken at Charlie’s before it’s too late. Tatiana doesn’t appreciate the criticism but she admits that the problems at the restaurant are too big for her to handle on her own.

Gordon sits down to sample the food, and he immediately finds fault with the bread, telling his server that it’s wet, soggy and ‘dreadful’. He orders the toasted ravioli, the frutti di mare, and the lasagna. The server warns him that the lasagna is ‘not typical’ and to ‘be prepared’, which only seems to confuse Gordon, and he finishes off his order with the chicken pizza, and a puzzled look on his face.

The toasted ravioli doesn’t create a good first impression, parts of it are still raw. ‘Which bits of it are toasted?’ Gordon asks the waitress with barely suppressed disgust as he sends the dish back to the kitchen, declaring that it’s ‘dangerous’. Tatiana doesn’t want the head chef Casimiro to hear Gordon’s criticism and tells him that everything is fine, which gives a good indication that she isn’t managing her staff very well, and she’s still avoiding any conflict in the kitchen when Gordon receives his next course, the frutti di mare.

Fortunately, the traditional Italian shellfish pasta dish isn’t raw like the ravioli was, in fact, it’s quite the opposite. The frutti di mare is so overcooked that Gordon declares the pasta to be nothing but ‘mush’. Even though Gordon was warned to be prepared for the lasagna it’s clear he wasn’t prepared enough. ‘What the hell is that?’ he asks when he first sees it, but if its appearance wasn’t to his liking then that’s nothing compared to the taste of it, which he describes as ‘bizarre’. To make things worse the lasagna is not only microwaved, but it’s also stone cold in places. ‘You’ve got a chef who can’t even microwave food properly?’ he asks Tatiana incredulously, and she’s reduced to hoping that the chicken pizza will improve Gordon’s mood.

Unsurprisingly the food doesn’t drastically improve on the last course and Gordon, after condemning the pizza as ‘doughy’ and ‘resembling nothing like home-made food’ finally summarizes his meal as ‘dreadful’ and ‘hideous’, and Charlie’s as depressing and a ‘mess’.

Gordon later sets a challenge between head chef Casimiro and sous chef Danielle. He sets them the task of making home-made meatballs and quickly learns that Casimiro is clueless about that relatively simple task too. He tells Danielle that she should be head chef and later that night Casimiro comes in for even more criticism from Gordon when complaints about his food being burned begin to come in. Added to that Casimiro refuses to work fast and will only cook one meal at a time. After Gordon takes issue with the waiting times, Casimiro refuses to cook any more, and Gordon takes Tatiana outside to speak to her about his attitude. He tells her to take responsibility for the restaurant, and she eventually realizes that Casimiro is not up to the job and she has to fire him.

Tatiana finally steps up and tells Casimiro that he has to go, and even though doing so reduces her to tears, as she’s been friends with the head chef for ten years, she realizes that it’s sometimes lonely at the top and business comes before friendship. Gordon congratulates her on finally making the tough decisions that needed to be made and assures her that she’s got his support. The next day Gordon brings in one of his own chefs, Jonathan, who will be spending the next month at Charlie’s to train a new chef and bring the standard of the food back up to a professional level. Gordon also encourages Tatiana to get in the kitchen and take on a more hands-on role in the running of the business. She spends the day with Jonathan and learns how to make lasagna and how the kitchen operates.

The following day Gordon and Jonathan introduce a fresh new menu that’s tasty, quick to prepare and full of exciting new dishes. The restaurant relaunches that night with everyone positive about the changes and initially, everything runs smoothly. After a while however some customers are unhappy at having to wait so long for their meals, and Tatiana identifies a lack of communication between the waiting staff and the kitchen as the problem.

Charlie’s Now in 2018 – The After Kitchen Nightmares Update

Jonathan remained at Charlie’s Italian Bistro for a month following filming taking place and trained Tatiana’s new chef to keep standards at the restaurant at the same level as when Gordon had left, but unfortunately, it wasn’t much longer before the restaurant closed. In July 2012 Charlie’s finally closed for business just a few months after the show first aired, despite generally positive reviews from customers.

Yelp reviewers awarded Charlie’s Italian Bistro four out of five stars, and reviews of the business were almost unanimously positive. In particular, many customers praised the food and several mentioned how friendly and welcoming Tatiana and the staff at Charlie’s were. Although many of the reviews were made at the time of Gordon’s visit, there were several that stretched back several years that were also complimentary of the food and the service at the restaurant.

No further information about exactly why Charlie’s closed is available, but considering the already considerable financial problems that Tatiana and her family were in by the time the Kitchen Nightmares team visited, it’s likely that in this case the business needed the kind of miracle that even Gordon Ramsay was unable to deliver, despite trying his hardest on what he later described as ‘One of the most difficult challenges I ever faced on the show’.