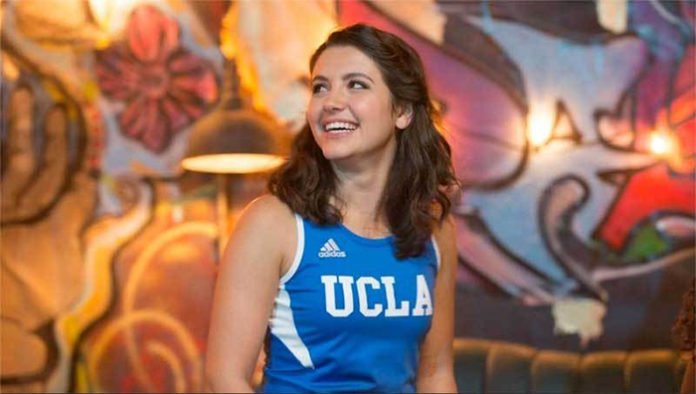 An artistic gymnast, Ariana Berlin is best known for her comeback after sustaining multiple injuries in a car accident in 2001. Though it was initially hard for her to get back into the spot, through hard work and perseverance, she eventually managed to compete for UCLA.

Aside from her gymnastics career, she is also known for her work as an actress and stunt double. For instance, she has appeared in shows such as 90210, Make IT or Break It, and Three Rivers. In fact, her incident had also been dramatized in a made-for-television film, Full Out: The Ariana Berlin Movie.

How is the brunette doing for herself nowadays? Is she still involved in gymnastics? What’s been keeping her busy in the recent years? How well off is she? From our research, Ariana Berlin’s current net worth is around $1 million. Where did this wealth of hers come from? This is the question that we’ll be trying to answer below; while we’re at it, we’ll also be taking a more detailed look at her career.

How did Ariana Berlin Make Her Money & Wealth?

Born on October 29, 1987, in San Diego, California, Ariana Berlin has been involved in gymnastics ever since she was a young girl. If anything, she was on her way to becoming a part of the U.S. Olympics gymnastics team as a young teen. Unfortunately, a career-shattering car accident when she was fourteen years old changed everything.

As it had happened, she and her mother had been struck by a speeding vehicle during an outing on the Thanksgiving weekend of 2001. Hit as they were driving down the freeway, it had caused their own car to tumble a handful of times, before stopping. As a result, Berlin, who was fourteen at the time, suffered from a multitude of injuries including cracked ribs, a broken collarbone, collapsed lungs, as well as a broken lung. In the end, she had to spend five days in an induced coma.

Following a gradual recovery, the teen found herself wanting to get back to gymnastics. Despite her determination, however, it proved to be difficult. Instead, she eventually decided to take up breakdancing as an alternative. Still, it did not satisfy her need to return to the gym. Wanting to one day compete for UCLA, she later had the opportunity to meet with Kondos Field, who accepted her resolve to regain her gymnastic skills.

Despite having suffered from multiple injuries just a few years prior, she was later able to make a full return to the gym. After a while, she was even offered a full scholarship for the 2006-07 season.

Outside of gymnastics, she has also worked as a stunt performer. Some of the TV series that shows appeared in include NCIS: Los Angeles, 90210, Make it or Break it, Castle, The Fosters, and Switched at Birth.

As an actress, she has also been involved with the shows, School Pride, Shake it Up, as well as the films, Honey 2 and Full Out.

Last August, she had gotten engaged to her long-time boyfriend, Jimmy Rotstein.

Does Ariana Berlin Have Any Children?

No, Ariana Berlin does not have any children as far as we know

Did Ariana Berlin Go to College?

She attended the University of California, Los Angeles, from 2005 to 2010.

What is Ariana Berlin Famous For?

Ariana Berlin is best known for her comeback after having sustained multiple injuries in a car accident at the age of fourteen.

With determination, she was later able to fulfill her long-time dream of competing for UCLA.

Ariana Berlin currently lives in California. Photos of her house are not available.

What Kind of Vehicle Does Ariana Berlin Drive?

How Much Money Did Ariana Berlin Make Last Year?

Information on Ariana Berlin’s annual earnings for 2017 is not available.

According to her IMDb page, she most recently worked on two documentaries, Shot in the Dark and 89 Blocks, both of which were released in 2017. As far as television appearances go, she most recently appeared in the film, Full Out as an assistant coach.

Wondering what she’s up to nowadays? If so, what about following her on social media? You can find Ariana Berlin on Twitter at @Arianaberlin or on Instagram at @ArianaBerlin. At this time, it doesn’t look like she has an official Facebook page.