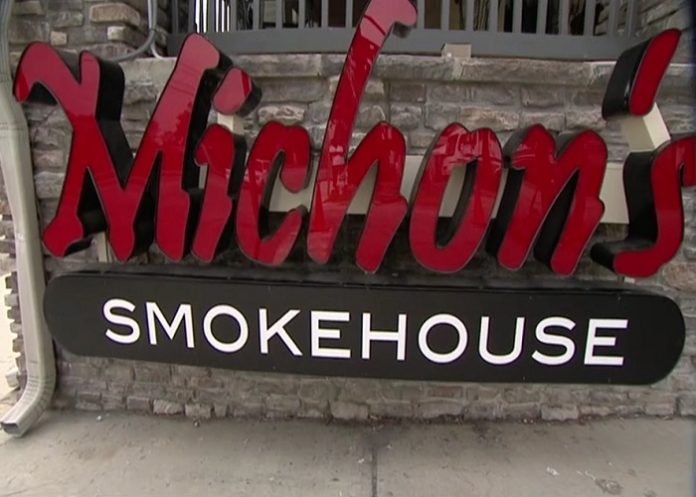 In early 2012 Gordon Ramsay and the Kitchen Nightmares crew visited Michon’s in College Park, Georgia. The restaurant had been opened by Al Wilson in 2002, and under his management the restaurant had prospered for several years, but after Al had suffered a collapsed lung and been advised by doctors to take a break, he had passed on control of the family business to his daughter Natalie, and now things weren’t going so smoothly.

Natalie took a hands-off approach to managing the business, and believed that getting frustrated over problems of work was ‘wasted energy’. As a result, standards had slipped and the restaurant was in serious financial trouble. In the introduction, we learn that even server Todesha thinks the food is ‘nasty’, mainly because it’s nearly always reheated in the microwave, and the numerous cooks seem to do what they want.

Customers are frequently complaining, not only about the ‘nasty’ food, but they’re also having to wait a long time before they even get to their disappointing meals. Al is $200,000 in debt and spends his time at home worrying about the state of the family business and watching the restaurant with the aid of the CCTV cameras. It’s not the kind of break that the doctor had in mind. He needs Gordon’s help to get Michon’s back up to the standards he introduced, or it’s the end of the road. But can Ramsay pull off what seems at first to be an almost insurmountable challenge?

Gordon begins his visit to Georgia with a meeting with Al, away from the restaurant. Al explains about his health problems and how badly things are going at the restaurant. He wants Natalie to take over and is frustrated that she can’t manage the business. Gordon then makes his way to Michon’s and is at first impressed with the look of the place. He describes the décor as ‘stunning’ but is less impressed with Natalie’s work ethic after meeting her. She explains that she mainly sorts out the payroll, and ‘hides’ in the back a lot doing paperwork, while Gordon is stunned that she seems almost unconcerned with what is going on out front.

Gordon chooses a meal from the menu and also speaks with Todesha about what the restaurant is like. She reveals that the lack of management is the biggest issue and tells Gordon that Natalie makes sure the staff gets paid, but that’s about all she does because she’s ‘lazy’. Gordon is clearly impressed with Todesha, but Natalie is complaining that she talks too much as she watches the conversation, and as Gordon’s food is brought out she seems more concerned with what has been said than how good the food is.

Gordon begins with the smoked chicken wings, and although he’s impressed with the ‘lovely’ sauce, the chicken is tough and dry. Gordon is disappointed and thinks the cooks just don’t care how good the food is. Natalie’s mom, Gaye, also works at the restaurant and admits to Gordon that the wings were cooked yesterday and reheated, although she can’t give a reason why.

Gordon samples the smoked chicken gourmet salad next, but that’s a disaster as Gordon quickly finds a ‘gross’ rotten tomato hidden in his salad. Todesha takes the meal back after admitting she’s not shocked at the discovery, but Natalie doesn’t seem to think it’s that important. Gordon’s pork ribs are likewise returned as they’re so dry, and the cornbread is even worse, ‘As dry as a mouthful of sand’ according to Gordon.

The rest of Gordon’s meal is of a similar low standard, the black eyed peas are ‘hideous’ and ‘absolutely shocking’, and the mashed potatoes are ‘dreadful’. Gordon’s collard greens are simply ‘gross’ and his final course of beef brisket is rubbery and dry. Among a short series of bleeps, Gordon admits that he doesn’t know where to start fixing the problems at Michon’s.

As the saying goes, too many cooks is usually not a good thing, and when Gordon visits the kitchen he seems surprised at how many there are, he meets Archie, Terrance, Tyrrell, Kelvin, Joe, and Keno, and asks in confusion which one is the head chef. He’s almost speechless when it’s revealed that there is no head chef, they all work wherever they want to.

Gordon pulls no punches as he gives his opinion of the food next, he calls his meal ‘disgusting’, and remarks that the only thing not microwaved was the salad, which causes a brief round of laughter from Natalie and the chefs, but Gordon isn’t laughing. He tells them his beef brisket was like a ‘dog chew’ and criticizes the kitchen as ‘not even a real kitchen’ for only using a microwave.

Gordon investigates the kitchen and discovers that there are literally hundreds of chicken wings being refrigerated, ready to be microwaved for customers, and he’s amazed at the fundamental mismanagement of the kitchen. He has a confrontation with Natalie in which he almost gives up on Michon’s, unable to find a way to make her see how badly she’s organizing things. Finally, Gordon fills a long kitchen counter with the hundreds of chicken wings and shows them to the staff, who finally accept the scale of the problem, ‘It’s like a mass grave’ explains Gordon, and Natalie begins to understand that she should be dealing with all these issues as well as the payroll.

Gordon then discovers that Michon’s has two high-tech smokers, worth about $17,000 each, and even though they are full of delicious chicken smoked to perfection, he was served yesterday’s reheated chicken as there was so much left over. It’s clear that Michon’s is suffering from a lack of direction and Natalie is not managing anything. Gordon meets the staff who confirm that everything is in chaos and they feel like they have no leader. Al, Natalie, and Gaye watch the meeting on the CCTV and it’s an emotional experience for Natalie, who is almost in tears. Natalie makes a vow to her parents to begin taking responsibility, and Gordon suggests the first thing to do is organize the chefs.

Natalie picks Terrance as a head chef and Gordon also brings in some expert help, in the form of Chef Adam, one of his own barbecue chefs, and they work on streamlining the menu, making the dishes easier and quicker to prepare, as well as adding a few barbecue classic meals that he thinks will help bring in new customers. Michon’s relaunch night has a few local VIP guests, as well as experts and critics, who all specialize in barbecued cuisine.

There are a few problems initially as Natalie struggles to cope with the busy kitchen, but Gordon offers some advice, and she manages to organize the staff to help them regroup. Relaunch night is a resounding success after those early hiccups and Natalie seems far more in control, she takes the VIP guests on a tour of the expensive smokers, and they are impressed with both the food and the equipment. Relaunch night is deemed a success by Gordon, and he leaves Michon’s convinced that Natalie now has a far better chance of making the restaurant an ongoing success.

Michon’s Now in 2018 – The After Kitchen Nightmares Update

The Kitchen Nightmares episode and Gordon’s guidance led to a short period of increased business and far better reviews for Michon’s. In February 2012, just one month after the episode was first filmed, another branch was opened in downtown Atlanta. Unfortunately, in a cruel stroke of bad luck, the new Atlanta location was completely destroyed in a fire only one week after opening its doors.

The recovery that Gordon had assisted in didn’t last long at the College Park location either. A series of bad reviews on Yelp gives the impression that many of the old problems had come back. Badly cooked food and long waiting times were both common complaints, and to make things worse, some comments heaped praise upon the quality of the meals, showing that Michon’s did have the potential to be a fantastic success, if only they could achieve such good quality consistently. Unfortunately, the bad reviews far outweighed the good ones by 2013, and although the College Park Michon’s managed to stay in business for eighteen months after Gordon’s visit, it’s ending was inevitable, and it finally closed its doors for good in August 2013.