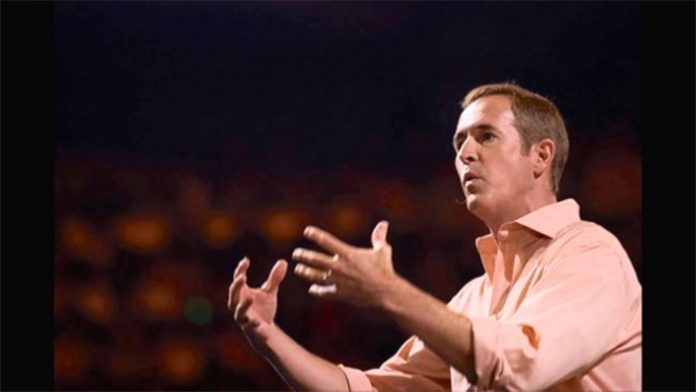 A senior pastor, Andy Stanley is perhaps best known for co-founding the North Point Ministries, a worldwide Christian organization. Today, he is associated with many churches in the U.S. including the Browns Bridge Church, Woodstock City Church, Bulkhead Church, and many others.

Considered one of the most influential preachers in the country, he has authored more than 20 books throughout his career, including The Grace of God, Creating Community, and Enemies of the Heart, and many others.

Have you ever wondered how much a preacher makes? With all the work that he’s done in the religious community, how much has he earned over the years? How wealthy is he? According to various sources, Andy Stanley has accumulated a net worth of around $40 million as of 2018. Though it’s not confirmed, it’s said that he makes upwards of $200,000 a year. Where do his earnings come from? We’ll be taking a look below- stick around if you’re curious!

How did Andy Stanley Make His Money & Wealth?

Born on May 16, 1968, in Georgia, Andy Stanley was raised in Atlanta, where he went to school. After graduating from high school, he studied at Georgia State University, where he obtained a Bachelor’s of Arts degree in journalism. From there, he attended the Dallas Theological Seminary, from which he later earned his Master’s degree. Not much else is known about his early life at this time.

Today, he runs the North Point Ministries, a worldwide organization that he founded in 1995. As of 2018, it is compromised of half a dozen churches in the Atlanta area (e.g. North Point Community Church, Browns Church, Buckhead Church, Decatur City, and a few others), and over 70 churches worldwide that serve more than 100,000 people on a weekly basis. Considering all this, it’s not surprising to know that Outreach Magazine hailed him as one of the most influential pastors in the U.S.

In addition to his work at the churches, he is also a frequent speaker- for instance, he has worked with the Global Leadership Summit for many years. In 2009, he was also chosen to speak at the National Prayer Service following the Presidential inauguration event.

An accomplished author, the pastor has written over 20 books throughout his career. Some noteworthy mentions include The Best Question Ever, Fields of Gold, Communicating For a Chance, and Enemies of the Heart. His most recent title, The New Rules for Love, Sex & Dating, was published in 2014.

On television, he even has his own program called, Your Move with Andy Stanley. Debuted on NBC in 2012, the show stars the pastor as he helps his audience to make better decisions, and have fewer regrets. As of 2018, it is currently in its seventh season. For those who are interested, you can view many of the episodes online here.

Having said all that, it’s hard to determine how much exactly he’s earned from his different projects. One thing’s for sure though- the pastor has an impressive list of accomplishments, whether it be his church-related work or television program.

Yes, he has been married to his wife Sandra Stanley for many years.

Does Andy Stanley Have Any Children?

Yes, he has three adult children with his wife, Allie, Garrett, and Andrew.

Did Andy Stanley Go to College?

Yes, he did. Sometime after completing high school, he went to Georgia State University, from which he obtained a bachelor’s in journalism. Following that, he resumed his studies at Dallas Theological Seminary, where he earned a master’s degree.

What is Andy Stanley Famous For?

Andy Stanley is perhaps best known for founding the Christian organization, North Point Ministries, which consists of over 76 churches worldwide (six of which are in based in Atlanta). In the recent years, he has also gained fame for his television program, Your Move With Andy Stanley.

The last that we’d checked, Andy Stanley lived with his wife in Milton, Georgia.

What Kind of Car Does Andy Stanley Drive?

Details on Andy Stanley’s vehicle are not available.

How Much Money Did Andy Stanley Make Last Year?

At this time, we do not have any information on Andy Stanley’s annual salary.

As mentioned earlier, Andy Stanley is currently kept busy with the seventh season of his television program, Your Move with Andy Stanley. On top of that, he of course, also continues with his church activities.

Want to keep up with what he has to say? If so, why not follow Andy Stanley on social media? That’s right, you can find him on platforms such as Twitter (@AndyStanley) and Instagram (@Andy_Stanley). Alternatively, you can visit his official website for the latest news and announcements.