What Happened to Mike and Mike? 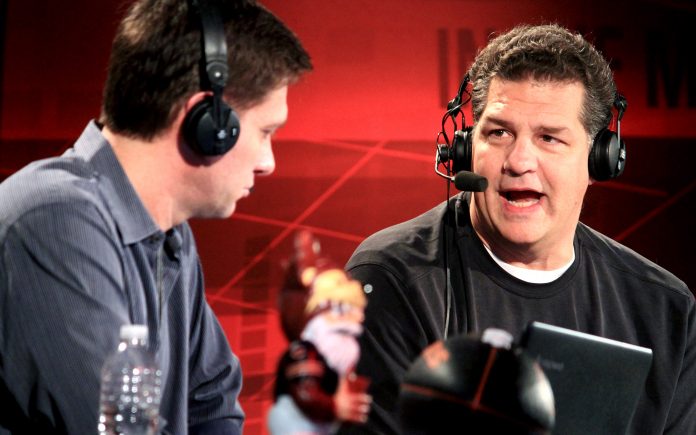 Mike and Mike, formerly known as Mike and Mike in the Morning, was an America-based radio show primarily focused on sports. Due to the names of the hosts (Mike Golic and Mike Greenberg), the show retained a unique name and ran for nearly 20 years. Mike and Mike were far from the first sports talk radio show, but it may be one of the more important ones. Unfortunately, Mike and Mike has gone defunct since then but read on more to find out about the history of this sports talk show.

What Are Mike and Mike Doing Now? – Recent Updates

Mike Greenberg signed on to ESPN Radio in 1999, even though the network was found in only four markets. Since his daily appearances on the Mike and Mike Radio Show, Mike Greenberg went on to host the ABC game show “Duel” (which only lasted a season). He also went on to appear on the soap opera Guiding Light with radio show co-host Mike Golic. In 2012, he co-hosted an episode of talk show “Live! With Kelly.”

Mike Greenberg has also released numerous books. The first book he released was titled “Why My Wife Thinks I’m an Idiot: The Life and Times of a Sportscaster Dad.” This book peaked at the number 14 position on the New York Times Bestseller list and was even nominated for a 2006 Quill Award. Mike Greenberg and Mike Golic teamed up to release a book in 2010 named “Mike and Mike’s Rules for Sports and Life.” Since then, Greenberg has released two more books; “All You Could Ask For” in 2013, and “My Father’s Wives” in 2015.

Mike Golic continues to host his own radio show to this day. When Mike and Mike ended in November of 2017, within two weeks, he created another radio show named “Golic and Wingo.” This show features his son. Golic also appeared in the sports game All-Pro Football 2K8 as a player. Golic played a defensive tackle for Notre Dame college, and even played pro football from 1985 to 1993. 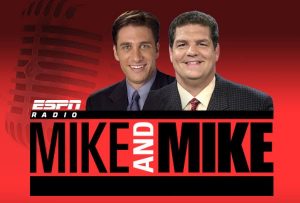 Mike Golic also appeared on an episode of Tilt, produced by ESPN. He made a cameo with Mike Greenberg, fellow radio talk show host, on TV Series Guiding Light in 2008. In 2015, Mike Golic was inducted into the National Hall of Fame in the Outstanding American wing.

About Mike and Mike

Mike and Mike came into existence only three days into the millennium on January 3, 2000. This show was broadcast to only a few markets but was one of the mainstays of the network. Mike and Mike contributed heavily to the growth of the ESPN network, as their four-hour format show covered all sorts of sports and allowed for bored commuters to call in and give their take.

Mike and Mike would frequently utilize hosts and contributors, which ranged from players and coaches down to celebrities and personalities. Mike and Mike went on to create some extracurricular programming for ESPN, including a game show and even coverage of a national spelling bee. The duo volunteered to be roasted with proceeds from the event going to support the V Foundation (the event raised close to $50,000).

Mike and Mike ended in 2017, namely due to rumors that Golic and Greenberg had either grown tired of each other or simply did not work together anymore. The Mike and Mike radio show ended on November 17, 2017. Mike Greenberg was moved to the main ESPN network, where he is still featured to this day as an anchor, reporter, and analyst, while Golic continues to host his own morning radio show.

Mike and Mike brought something new to the radio market – every day for four hours, you were able to listen to two doofuses with differing opinions and ideas battle each other out. And even better, listeners got to be a part of it. This was a brand new idea, but it worked – Mike and Mike went on to air for more than 17 years.

A lot of the show’s charm came from Mike Golic’s passion and experience as a football player and Mike Greenberg’s eloquence and well-spokenness. One of the frequent topics of debate between the two Mikes was the “Sheet of Integrity.” Mike Greenberg coined the term, and to explain simply, a sheet of integrity is the idea that you will submit only the same draft picks for different draft pools. From 2000 to 2014, this was a frequent topic of debate and in 2007, Lowe’s even sponsored the “Bracket of Integrity Sweepstakes.” The contest ended in 2014 thanks to Mike Golic having won the previous four contests.