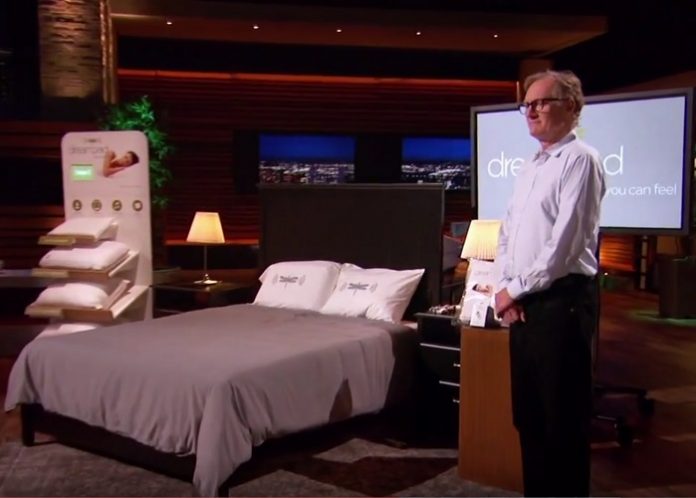 The DreamPad is an innovative and therapeutic pillow that is designed to aid relaxation, and induce a peaceful nights rest, with sound and music that is delivered directly to the user’s inner ear. Randall Redfield, from Long Island, New York, co-founded Integrated Listening Systems (ILS) in 2007 with the aim of improving health, and reducing stress, through the use of music and movement. With a heavy focus on research and development, ILS eventually developed the DreamPad, a completely new type of product to combat our increasingly stressful lives.

ILS teamed up with a number of organizations that researched the effects of stress, including the American Institute of Stress, and the International Society for Traumatic Stress Studies, in order to create the DreamPad, which was originally designed as a relaxation tool for children who experienced high levels of anxiety, particularly those who had experienced trauma, or those who suffered with autism. The beauty of DreamPad however, was that it could be used by anyone who experienced high levels of stress or anxiety, and that’s a demographic that continues to grow year on year.

Studies show that sleep deprivation is a major, and often under-appreciated, impediment to good health. As many as one-quarter of the Worlds population suffer from a range of sleep disorders, including broken sleep, early waking, and the most common one of all, the inability to get to sleep without up to an hour trying to drop off. In countries with high productivity cultures, especially North America and Western Europe, the figure rises to one-third of the population. Even people from those regions who do not suffer from sleep disorders are falling behind when it comes to healthy sleeping patterns, with less than 40% of people in full-time employment enjoying an average of at least seven hours of sleep a night.

In November 2016 the DreamPad was launched, and by mid-2017 Randall Redfield found himself in the Shark Tank, hoping to pick up a shark partner for the DreamPad business, but he found the experience anything but relaxing and stress-free.

Randall entered the Shark Tank and announced he was looking for an $800,000 investment in exchange for 10% of the DreamPad business. He explained that America had a big sleep problem, it was so severe that many health professionals considered it an epidemic. That’s where the DreamPad came in, it was a device that could relax your body, and stop your mind from racing, while you were trying to get to sleep.

Randall asked for a volunteer to try out the DreamPad on the large comfy-looking bed in the tank. Mark Cuban jumped at the chance, but he was quickly joined by Lori Greiner. Robert Herjavec asked Randall if Mark and Lori were hearing music, and the DreamPad entrepreneur confirmed they were, explaining that because the music was transmitted as a vibration direct to the inner-ear, it was inaudible even to someone on the same bed two feet away.

Soon all the sharks had to try the experience for themselves, and Robert jumped up to join Mark and Lori, followed by guest shark Bethenny Frankel. Kevin O’Leary soon made it five in a bed, although that was the signal to get back up for most of the other sharks. As the sharks returned to their chairs Mark asked Bethenny ‘Was it good for you too?’, and the Skinnygirl Ceo replied that she hadn’t been in bed with that many billionaires for at least a couple of weeks.

With the sharks’ impromptu slumber party finished, it was back to business. Randall proceeded to hand out samples of the DreamPads, while Lori asked if the pillows were feather-filled. Randall confirmed that two of the four models were, but there was also a thin version and a memory-foam DreamPad. Robert examined his sample and asked where the speaker was. Randall explained that there was no speaker, instead, there was a transducer that converted the sound into vibrations, thereby making it audible only to someone with their head on the pillow.

Randall explained that a DreamPad user would download the app to their phone, and then using a Bluetooth receiver they could play music direct from their phone, or alternatively use the ten sound selections designed to induce sleep that came with the app. Randall told the sharks that the DreamPad was a completely different concept to noise-masking sound machines, which typically used white-noise to cover sounds, instead, the DreamPad brought sound to a sleeper by conducting vibrations through their bones, bringing it directly to the inner ear.

So far the sharks had kept things relaxing and stress-free for Randall, but Kevin O’Leary wanted to discuss the elephant in the room, namely the $8 million valuation for the DreamPad business. ‘I’ll tell you what’s keeping me awake at night’ he said, and began talking about the valuation, but Lori tried to shut him down, repeatedly urging her fellow shark ‘Don’t go there yet’. Kevin wasn’t going to be silenced though, ‘It’s a speaker in a pillow for eight million dollars’ he complained.

Randall disagreed, ‘It’s not a speaker, and it’s much more than a pillow’ he replied, observing that people were used to paying twenty to thirty dollars for a pillow. ‘How much does it cost?’ asked Robert, and Randall revealed the DreamPad retailed for $159 on average. ‘That’s a lot for a pillow’ observed Robert, and by now Randall was looking far from relaxed and stress-free. Kevin O’Leary was like a dog with a bone and insisted that Randall justify the hefty valuation. Randall explained his business was an ‘Incredible opportunity’ that had a potential market of one-third of the population, but Kevin wanted further proof. Randall revealed that sales since November 2016 had been $600,000. Kevin looked unimpressed and wanted to know what sales were projected for the following year.

Randall expected to sell $1.2 million worth of DreamPads during that period, through a combination of Amazon, retail sales, and through the company website. Kevin wanted to know what profit those sales would generate. $150,000 was the answer, but Kevin replied that after tax that would be $125,000, or just one sixty-fourth of the total valuation, and that was if sales matched the projected figures. Randall explained that the projected sales for the next year were from a five-year projection, but Mark Cuban pointed out that five year projections were rarely accurate, and after other sharks had expressed their own doubts about the projected sales, Kevin offered his own projection, that Randall would fail to get a deal in the tank because of his ‘Crazy’ valuation.

With the sharks all appearing to see the DreamPad as a nightmare investment, Randall attempted a last-minute explanation of the reasons behind his multi-million dollar valuation. The DreamPad was patented, it addressed a specific need, and the supply chain had been completely put into place, but it was clear that the sharks were unimpressed. Mark Cuban was first to speak, he told Randall that when a product filled a specific need, the challenge was to convince customers that the DreamPad was a better product than that offered by the competition, and Mark didn’t believe that challenge had been met, and for that reason Mark became the first shark to drop out.

Robert Herjavec didn’t waste too much more of Randall’s time, ‘The valuation is nuts’, he explained, ‘I’m out’ he confirmed without any further explanation needed. Kevin O’Leary was in full agreement with that assessment of the valuation, obviously, being Kevin, he had plenty to say about it, launching into one of his original shark tank tales, which involved a race of aliens who would happily pay a valuation worth sixty-four times that of sales, but as Kevin was ‘From planet Earth’, he was out too.

Guest shark Bethenny loved the DreamPad as a product, but she thought Randall had missed a golden opportunity with his ‘Bullish’ valuation. Bethenny quickly dropped out too, leaving only Lori involved. Unsurprisingly Lori wasn’t going to bite either, however, she did love the product. She was impressed with the concept behind it, and the quality of the pillow, as well as impressed by Randall’s passion for his product, but even though she had sold millions of dollars worth of pillows on QVC, the valuation was the problem.

Lori invited Randall to be ‘Creative’ with his valuation. The entrepreneur admitted that he and his partners had agreed to give up a 15% stake in DreamPad in exchange for the $800,000 investment, but that wasn’t a big enough concession for Lori. Ultimately the final shark dropped out too, and Randall left the tank without a deal. The sharks meanwhile had found another use for their DreamPads, as they embarked on a brief pillow fight, proving that for them at least, the DreamPad was a multi-use product and a lot of fun, even if it wasn’t worth $8 million dollars.

DreamPad Now in 2018 – The After Shark Tank Update

Immediately after his Shark Tank appearance, Randall claimed to be shocked at the sharks reaction to his valuation, insisting that the DreamPad business was worth what he had asked, but some viewers believed that Randall had never intended to make a deal, instead he had taken the opportunity to advertise his product to five million Shark Tank fans for free.

Randall did reveal, in an interview with Business2Community in February 2018, that the Shark Tank experience was outside of his comfort zone, and that his strategy had been to keep the pitch simple in an attempt to get the sharks excited about the DreamPad. Overall Randall didn’t seem intimidated by the negative reaction to his valuation that he received from all the sharks, and perhaps it’s true that he deliberately inflated the valuation to put off any potential investors, but he also believed that there were other issues that the sharks never considered.

In the interview, Randall remarked that none of the sharks understood the speed with which the sleep and relaxation market was growing, but he also revealed that he and his partners were looking for a strategic investor, and they were not convinced that they would find one among the sharks. Randall also revealed that the visibility from the show had been so great that the company had temporarily sold out of DreamPads, after huge sales in the six weeks following his Shark Tank appearance.

Randall admitted that the Shark Tank appearance had been a learning experience and that there were elements of the pitch he could have improved, but he also pointed out that a 45 minute appearance had been edited down to just 12 minutes, and to be fair to the DreamPad entrepreneur, it was noticeable that some parts of the financial discussions were edited out, presumably to make room for the numerous complaints about the valuation. Perhaps Randall’s advice to other potential Shark Tank entrepreneurs, that they see an appearance on the show as a ‘Sweet Bonus’, rather than a central part of their strategy, speaks volumes about his real motivation for appearing on the show, but either way, Randall doesn’t seem to think his failure to get a deal in the tank has affected the future of the DreamPad business at all.

You can read all about the technology behind the DreamPad on the company website, where you can also buy the product, download the app, and learn about how the DreamPad works. The company Facebook page offers lots of tips for those suffering from relaxation and sleep issues, and also provides information about where you can buy the DreamPad in retail stores.