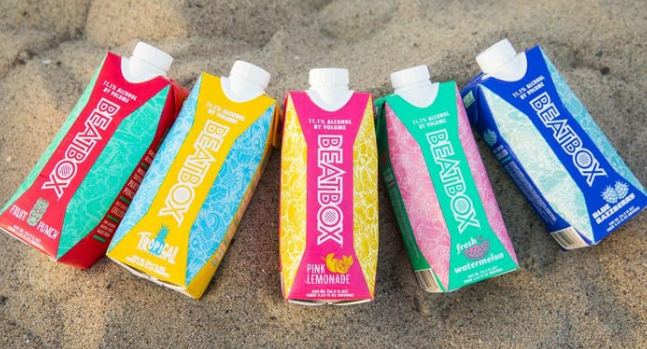 BeatBox Beverages is a boxed wine company that was founded in Austin, TX on the belief that boxed wine doesn’t have to be boring. Founding members who include Justin Fenchel, Aimy Steadman, Brad Schultz, Jason Schieck and Daniel Singer saw an opportunity to create a more fun and better tasting, 5-liter bag-in-box beverages for a market of young Millennials.

Members Justin Fenchel (CEO), Aimy Steadman (COO) and Brad Schultz (CXO) went on the show during its sixth season seeking $200k for a 10% stake of their company.

They explained how traditional wine and boxed wine can be boring and showcased their fun brand attitude, explaining that they wanted to change the boxed wine market forever.

They explained that the BeatBox beverages boxed wine was not just a wine, but also an experience.

They used a unique orange wine that was more like a spirit than a wine and allowed them to create mixed drinks that their customers absolutely loved.

They mentioned that every box contains almost seven bottles of wine which made it enough to share with everyone and that it was all packaged in a cardboard box shaped like a BeatBox, to give the experience a fun, party atmosphere.

After passing out samples of the four BeatBox wine flavors, Barbara Corcoran asked what ‘Orange Wine’ was and CEO Justin Fenchel informed her that Orange Wine is a unique, clear wine that resembled a white spirit.

Kevin O’Leary went on to say that he didn’t like the flavor but the other sharks disagreed with him. Lori Greiner said that she loved the blue Razzberry lemonade flavor which reminded her of blue raspberry snow cones.

Mark Cuban asked how much alcohol the beverages contained and Justin Fenchel informed him that they contained 11.1% alcohol. The sharks seemed impressed by that.

They also stated that each serving contained only 121 calories and only 7 grams of sugar, making it a low-cal option.

Kevin O’Leary asked them to explain more about their business, where the wine was manufactured, what their margins were and who among them was actually handling the distribution.

Justin Fenchel told him that the company was self-distributed and that they became a winery in their own right but that it had gotten to the point where they were spending too much time at their facility making and distributing the wine, and that they didn’t have time to market it. Which was why they found a co-packer in Dallas that then went on to make the wine for them.

Robert Herjavec asked Justin what their sales were. He answered him that their sales amounted to $235k in 14 months and that an additional $120k was due to come in that very quarter.

Robert Herjavec asked them how much money they had raised when they started. Jason told him that they had self-funded their company for $55k and had taken on $100k in family and friends debt.

Robert Herjavec then asked him how they expected to go from $235,000 to $5,000,000. Jason answered that their strategy was to identify new stores where they knew their boxed wine would sell well and support each store with at least six tastings.

To that, Robert Herjavec asked him what they needed the money for. Jason told him that it was for opening new stores and supporting them with new tastings that were on average a $100 per tasting.

Mark Cuban commented that doing that in the store seemed really good but was also hard to leverage and that because they worked one store at a time, their leverage points weren’t all that great and that in his mind, the strategy was wrong.

He went on to tell them that they needed to take advantage of events and places where there were thousands of people.

Justin then said that he felt that they had already eliminated a lot of the risk associated with a new consumer products company and that they needed someone to help scale their business.

Barbara Corcoran offered them $400k for a 20% stake and Kevin O’Leary halved Barbara’s offer, offering them only $200K for the same 20% stake.

Mark Cuban then addressed them saying that he understood that they weren’t selling wine, but rather that they were selling fun. He told them that he was the best suited among the sharks to create the biggest splash for their company and offered them $600K for 33%.

They countered with asking him for a million dollars for a 33% stake. Mark Cuban agreed and the deal was accepted before Lori and Robert had a chance to make their offer.

The team was very excited and said that they hadn’t imagined that they would walk away with a million-dollar deal.

BeatBox Beverages Now In 2022 – The After Shark Tank Update

The $1 million deal with Mark was finalized shortly afterward. Within four months, they had made more than $440,000—a big jump from what they’d been making earlier. They also started selling their products at local liquor stores, where they proved to be a big hit.

Fast forward to 2016 and they were featured an episode of Beyond the Tank, where it was revealed that they’d launched in four new states, with the goal of expanding into all 50. They also landed a deal with Walmart, who agreed to sell their products in 100 stores. During the episode, they also headed over to Flavorman, a food science company, where they came up with three new flavors.

Since then, the company has grown tremendously. If anything, they’ve become one of the fastest growing brands in the industry. In 2021 alone, they earned more than $18 million, which is a 160% increase from 2020 and a 350% increase from 2019. Around that same time, they also changed their name to Future Proof Brands, LLC.

Not long afterward, they introduced a number of new products including the Corkless, a single-serve canned wine, the Vizzy, a hard seltzer, and the Brizzy, which is a seltzer cocktail. Currently, they’re available in more than 12,000 stores including Quik Trip, Circle K, Kroger, and more.

At one point, they also launched a fundraising campaign on WeFunder, where they successfully raised more than $2.2 million.

As of 2022, the company is still in business. The last that we checked, their products were available at more than 34,000 retailers across the country (you can use the store locator feature on their website to find the closest location near you). Their 2022 revenues are also expected to reach $20 million.

Their Hard Punch line (11.1% ABV) currently consists of seven flavors: Cranberry Dream, Blue Razzberry, Tropical Punch, Pink Lemonade, Peach Punch, Fruit Punch, and Fresh Watermelon. 12-packs of each flavor go for $59.99 or you can get a 6-pack variety pack for $34.99. You can also save a bit of money by subscribing  (they offer a 15% discount for monthly subscriptions).

They also have a Zero Sugar line (6% ABV), which includes Blue Razzberry, Pink Lemonade, Peach Punch, Fruit Punch, Tropical Punch, and Fresh Watermelon. Not only are they sugar-free, but they’re also low in calories. For those who are interested, you can check out BeatBox’s website here. They even have a merch section where you can buy hats, coolers, hoodies, tees, bags, and more.