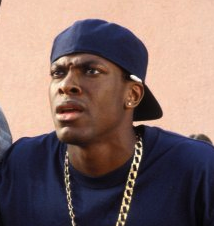 Hailed by some as the next Eddie Murphy, the actor and comedian known as Chris Tucker is an energetic celebrity who has recently been quiet in the world of film. His last major appearance was in 2013, when he hosted the BET Awards. What happened to the star of Friday and the Rush Hour series? Where is he today?

Born in Georgia during the 1970s, Tucker was the youngest of six children. He learned to use his humorous side at an early age, since he had to be funny in order to get attention from his siblings and parents. He would watch Eddie Murphy and Richard Pryor, and would try and copy their styles. It seemed to be working, as he had a reputation throughout high school as a “class clown”, and he was able to even make his teachers laugh. One of his teachers even suggested to him that he should show off his stand up skills at the school’s talent show. He got the whole school laughing, and by the end, the cheers where deafening and not a single student or staff member could be seen sitting down.

His classmates later voted him as “Most Humorous”, and Tucker decided that he was going to become a comedian upon graduation. He would go perform at a local comedy club. His shows always had a great response. More success arrived to him locally, and Tucker eventually decided to take his talents to Los Angeles, California, to pursue his career in comedy and acting. 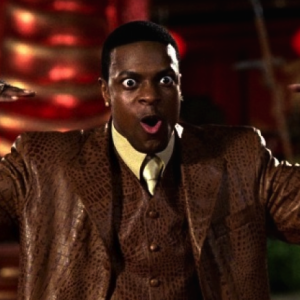 In 1992, Tucker performed regularly at Def Comedy Jam. This raised his stock to the point where he landed a role in House Party 3, and his career started to take off. A few years later he starred alongside Ice Cube in Friday, where he played the character Smoky, a marijuana dealer who had the potential to make a lot of money, but used most of the weed himself. Tucker’s humorous persona helped make the film a surprise hit. Tucker then was featured in Dead Presidents, showing off his acting talent in a serious film.

In 1997, Tucker starred alongside Charlie Sheen in Money Talks, a movie about a criminal who makes a deal with a TV newsman for protection from the police and other criminals. The film was a massive hit, and he then starred alongside Bruce Willis in another film, The Fifth Element.

When he landed the starring gig in the movie Rush Hour, his popularity started to explode. The movie was about two cops teaming up to get back a kidnapped daughter. It was the biggest hit of any movie Tucker had acted in, and he reprised his role for the next two movies in the franchise.

Chris Tucker, for reasons unknown, put his acting career on hold between the Rush Hour films. His home was foreclosed in 2011, and he’s been quiet. Rumors started to circulate; some saying Tucker was dead. What happened to him?

So he’s still alive, but what has he been up to? He’s currently trying to revive his comedy career, but what about his acting career?

“Well, you know, I was looking for good movies,” he said when asked about the offers he turned down. His last movie he was seen in was Silver Linings Playbook, where he played a mental health facility resident opposite Bradley Cooper.

“It was a fun part, a good part and a good director. Eventually, it became a good cast.”

Tucker says he has been focusing on the standup comedy side of career, and acting is on the back of his mind. 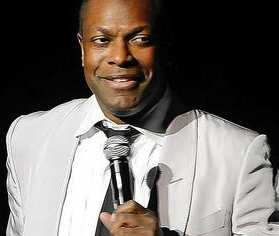 “I went back to the comedy clubs, because I wanted to go back to do standup and sharpen my craft, get back connected to my audience, with my fans.” It was necessary for him to get back to work, since he was having troubles with the IRS. He owed over $10 million in taxes, but he considers this a silver lining.

“That helped me get back to standup, because that connected me back with my audience. Because they can relate to that, because they got their own problems.”

While the IRS problem is no longer existent, Tucker is still performing at clubs, doing what he loves. While everyone is wondering, “where on Earth is Chris Tucker?” The truth is that he is exactly where he came from, doing what he’s always been doing. He was always a comedian first, actor second, and it seems as if that’s going to remain true.

Chris Tucker hasn’t appeared on the big screen since 2016. His last role was that of Albert in the sports film, Billy Lynn’s Long Halftime Walk. Prior to that, he appeared in the 2012 comedy, Silver Linings Playbook.

As for why he stopped acting, it has to do with his Christian faith. He was born again in the mid-90s, and for that reason, prefers to keep his language clean, which limits the number of roles that he can play. With that said, he did appear in a video short titled, Tito Jackson: Love One Another last year.

He’ll also be appearing in an upcoming film about Michael Jordan, which recently finished filming in July. He’ll be starring as Howard White, a rising Nike executive, alongside Ben Affleck, who will be playing Nike’s co-founder Phil Knight. Other cast members include Viola Davis, Jason Bateman, Matthew Maher, Julius Tennon, and Marlon Wayans. A release date has not yet been announced.

There are also rumors that he’ll be reprising his role for Rush Hour 4, though it hasn’t been confirmed.

Aside from that, he’s mostly been focusing on his stand-up career—that’s what he was known for before his movie career took off, after all. And from the looks of it, that’s what he’s been busying himself with the past few years.

In fact, he’ll be embarking on a concert tour later this fall. It’ll kick off on September 9th, at the Caesars Event Centre at Caesars Southern Indiana and will continue until November 11th, at the Horseshoe Casino’s Bluesville in Robinsonville, MS. For those who are interested in going, you can get tickets from Ticketmaster.

Earlier this summer, he also returned to Las Vegas for a two-night engagement at Encore Theater, which took place on Friday, July 8th, and Saturday, July 9th.

He also performed several shows last year, one of which took place at the Fox Theatre in Atlanta, GA (it was rescheduled from February 2021 to October 2021 due to the COVID-19 pandemic).

Aside from that, he’s appeared in a few TV programs including Phat Tuesdays and The 2021 NBA Finals. He was also a guest on Jimmy Kimmel Live! last year.

For more up-to-date news on the Rush Hour star, you can follow him on social media. He has a Twitter account (@christuckerreal) with over 798K followers as well as an Instagram account (@christucker) with more than 2 million followers. He also has an official website (christucker.com), though it seems to be offline at the time of this writing.