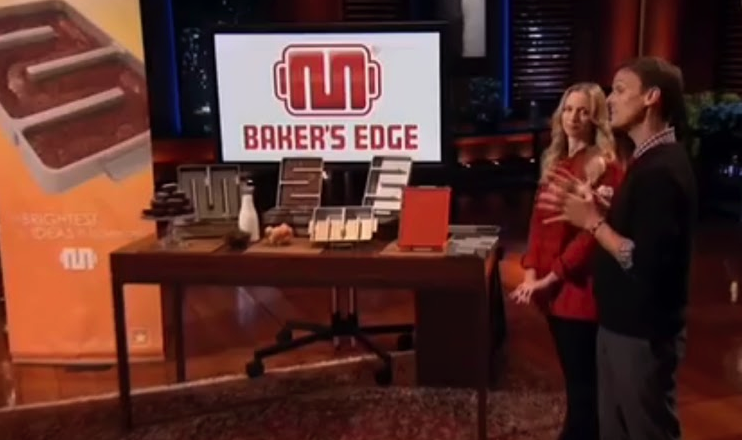 Matthew Griffin, the inventor of Baker’s Edge, came up with the idea for his Edge Brownie Pan when he just graduated from Ball State University in Indiana. One day, when he was eating lunch, his former boss walked up to him and told him a story about a young girl, who invented a microwave bacon rack and made millions of dollars. Matthew states that this inspired him, and one night when he was eating a corner brownie, which he loves the most, he came up with an idea. His idea was to design a new style of pan, which can bake a 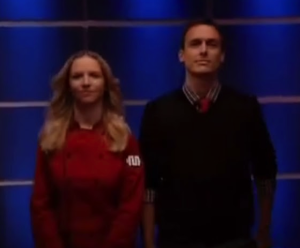 whole tray of corner brownies, and to his surprise, he was the first one to ever think about this. Matthew states that he developed the concept for the Edge Brownie Pan in 1998, but he didn’t make the first prototype until 2002, when he and his wife Emily had to spend every single dime they had on the project.

Emily Griffin, wife and partner of Matthew Griffin, states that he always had an interest in baking and cooking, ever since she was a little girl. She says that she never made easy meals in college, such as Ramen noodles or Mac and Cheese, just because it is easy and cheap. She always cooked her own dinner, and always baked cookies, just to give away to other people. After her college years, she was really into cake decorating, which made her quit her job and attend a culinary school. After Emily received her baking and pastry arts degree, she helped Matthew to refine his idea for the Edge Brownie Pan. She states that it was very difficult and they felt like they are back at school, because of the fact that they had to study, write and spend a lot of time in the library.

Matthew starts by introducing himself to the Sharks, after which his wife Emily does the same and tells the Sharks that they are from Carmel, Indiana. Matthew states that they are seeking for a four hundred thousand dollar investment, for a twenty percent stake in their company. Emily takes over the presentation and states that they have completely reinvented bakeware. Emily says that everyone loves brownies and asks the Sharks if they have ever stopped to think about which brownie is really the best? She continues by taking a normal pan and showing it to the Sharks. She states that in a normal pan of brownies, you have a middle and a ring of outside pieces. Matthew says that if you are like a lot of other people, you go for those corner and edge pieces first.

“Lori Greiner has a big smile on her face”

Matthew states that after realizing that the edges are where the baking magic happens, they put on their thinking caps and came up with a whole new way to make brownies. Matthew takes one of his Edge Brownie Pans and tells the Sharks that in this pan, every brownie has at least two chewy edges. He states that the pan’s bottom rises up, which allows for an even hot air circulation over every brownie, which caramelizes and gives every single brownie in the pan a nice chewy edge.

“Robert Herjavec nods his head and looks pleased with the idea”

Matthew states that for the past several years, they have been dominating the larger, multinational brands and want to leverage on that success, and launch a line of conventional bakeware. Matthew says that they think that they can make normal bakeware so much better, in both form and function. He states that based on their current success, they are just the company who could get it done.

Matthew answers the question by saying that they do. They have a utility patent on the Edge Pan design.
Matthew states that everybody in the industry said that their idea was dumb, this is too new, but they stuck with it anyways. Matthew says that as soon as they started making money, everyone started following the 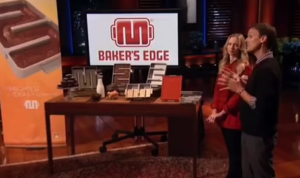 “Robert Herjavec asks how successful their company is at the moment”

Matthew answers the question by saying that, since they started in in 2006, they have done nearly six million dollars in sales.

“Many of the Sharks are shocked by the figure, but Kevin O’Leary asks for the sales of this year only, not all the years combined”

Matthew answers Kevin’s question by saying that, just in 2012 they have done sales of over two hundred fifty thousand dollars. He states that at the peak, they have done nearly two million dollars of sales in a year, but a million dollars of that, was in thirty days. Matthew says that because of Oprah Winfrey, they were able to sell a lot of pans in a short period of time, but now their sales are naturally lower. They have used the money that they made to pay all of their debt and saved some of it.

“Lori Greiner says that she knows they have been on QBC”

“Robert Herjavec states that Matthew is not on Shark Tank because of the pans, but asks him how he is going to go back to nearly two million in sales”

Matthew answers Robert’s question by saying that they have a new product, called the Better Muffin Pan. He shows the Better Muffin Pan to the Sharks and states that both Emily and he have applied their design in a muffin pan, which is designed like a honeycomb. He states that circles nest like a honeycomb in nature, and this designs saves them on metal. His design also does not allow for any spills, because the muffin batter will just flow over into the other circles in the pan.

Matthew answers these questions by saying that their muffin pan is not cheaper than a normal muffin pan. He states that the Better Muffin Pan costs $35,95, just like their Edge Brownie Pan. He also states that it is super easy to clean, which is another key in their products, because it is one piece and has rounded corners.

Matthew states that his products are worth two million dollars because they have a patent that protects them. He also says that they have a foot in the door, in an industry that has had no new entrees in the last couple of years.

Robert Herjavec says that for two years, Matthew and Emily’s business is flat lining. He says that he is not taking anything away from what they have created, but he likes to get into business with people that have a sense of paranoia. Robert states that in his world, only the paranoid survive, and that Matthew and Emily are very comfortable. Robert is out as well.

Matthew and Emily disagree with Robert’s statement about being comfortable. Matthew says that they have a family of three kids, after which Emily takes over the presentation. She says that, at the time, they had two kids, one of which was a new born. They had five thousand pans in their basement, and their family came over to help them to pack and ship. She states that they have been doing this hardcore for years.

Kevin O’Leary says that the past is irrelevant for him, and says that if he is going to put up dollars and invest in Baker’s Edge, he wants to know what the future holds. He says that the Better Muffin Pan does not feel like it is going to change the world for muffins. He says that everyone already has one, that wanted one and that he is out as well.

Lori Greiner states that it is easy talk, when the other Sharks have never created a product. She says that it is very difficult to come up with an idea that is as revolutionary as the products of Baker’s Edge. Lori states that it does not matter if the past was better when it comes to sales, and that she admires both Matthew and Emily, because she thinks that the pans are a genius idea. She continues by saying that they do need to come up with new ideas, and that the Better Muffin Pan does not strike her as an original idea, like the Edge Brownie Pan. Lori Greiner states that she is out.

Barbara Corcoran tells Matthew to not put a lot of time into the Better Muffin Pan, because they cannot afford it right now. She states that they need to be really careful with their next product, and that the muffin pan is not careful enough. She says that she is not confident in their products, so she is out as well.

At the end, Matthew says that he respects the opinions of the Sharks, but he believes that their company still has a long way to go, and they will get there eventually.

Even though Matthew and Emily were struggling to keep their sales up, it seems like they have been able to continue on as a business. They did not manage to get an investment from the Sharks, but that did not stop them. There is no mention of Baker’s Edge being the best or worst on Shark Tank. The only reason that the Sharks did not invest in this company is because Matthew and Emily failed to come up with new, innovative products. 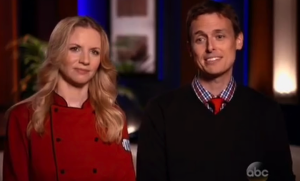 If you are interested in getting your hands on some Bakers Edge products, click this link to see all the discounted items available at Amazon.com from Bakers Edge.. There are a lot of very positive reviews about their products, most of them with a five out of five star rating on Amazon. People seem to enjoy their products, and love baking brownies and other things in them. There is also a Facebook page with a lot of very positive reviews about Baker’s Edge products.

Baker’s Edge definitely did not fail as a business. They are holding several patents for their innovative ideas. They only need to come up with new ideas, in order to keep their products flowing into the market. Right now, there are three different pans, and a lot of accessories that you can purchase on the Baker’s Edge website. There is the Simple Lasagna Pan, which goes for $49,95, the Edge Brownie Pan and Better Muffin Pan which both go for $35,95.