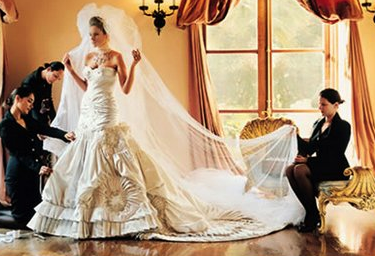 Each and every girl once dreamed of a fairytale wedding where they will promise eternal love to their Prince Charming. In that special day, one of the most important factors is what the bride will wear when she walks down the aisle. Certainly such a memorable event in a girl’s life deserves a gown that’s elegant and will make heads turn due to its allure, but usually cost is taken into consideration.

But for those who deem that money is indeed no object for an event that happens only once in a lifetime, there are dresses made with the luxurious majesty of precious metals and stones and other expensive materials that some would think they only existed in the imagination.

With costs ranging from hundreds of thousands to a million dollars, here are the top ten most expensive wedding dresses ever made:

Blue and purple gemstones worth 9,999 carats were provided by a Hong Kong based jeweler for this dress, which is also the name it is referred to and the inspiration for its nickname “glittery gown”. Created in the city of Shangrao at China’s Jiangxi province in 2007, the dress also has 222 diamonds and 100 rubies and the total number of authentic precious stones attached to it makes the dress weigh at around 40 pounds. 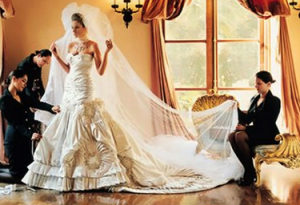 Worn by Melania Knauss for her wedding with the billionaire Donald Trump, the dress was created by John Galliano, a designer of Christian Dior fame. The exquisite dress boasted white duchesse satin of around 300 feet and a train that’s 13 feet in length. It was also adorned with crystal rhinestones and pearls that range at 1,500 pieces that collectively weigh 50 pounds. So heavy the dress was that Melania was instructed to eat a proper diet prior to the wedding so she can have the strength to carry its weight, and she sat on a bench instead of a chair to support the dress. She was also featured in the February 2005 issue of Vogue magazine wearing the wedding dress. 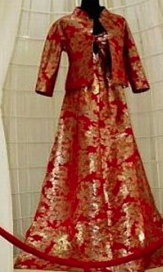 Similar to the Vera Wang’s Peacock Dress, this one is also unique as it boasts an authentic platinum surface against a crimson hue, crafted in an oriental pattern with floral designs that go well with its metallic luster. Originating from China’s province of Anhui, the dress is considered rare as the use of platinum on wedding dresses is not a common practice, compared to others with either gold or silver on them.

The silvery wedding dress is made of almost 40 meters of fabric silk sewn with platinum threads that give it a grayish finish, backed with beautiful handcrafted embroidery of floral designs on the gown, and a stylish neckline. The dress was designed in 2008 by Italian fashion designer Mauro Adami, the same designer who made a platinum jacket for musician Keith Richards, and this dress is now part of his Domo Adami collection.

The elegant wedding dress worn by Princess Kate Middleton during her wedding to Prince William last April 29, 2011 was designed by Sarah Burton, a prominent designer and the director of Alexander McQueen, a luxury fashion house. It was made with ivory and white satin gazar, and two laces were used on the wedding dress namely English Cluny and French Chantilly which were hand cut into floral patterns steeped in symbolism (daffodils signified Wales, roses for England, shamrocks as Ireland, and thistles for Scotland). The skirt also had satin gazar arches and pleats, with a bridal train length of 270 centimeters, and designed to resemble a flower that’s opening.

Made by Lebanese fashion designer Walid Atallah, the dress was created with silk faille and tulle and had a strapless sweetheart neckline. 200 grams of pearls and real diamonds were arranged in a floral pattern and frame the bodice and the skirt. Egyptian actress Somaya al-Khashab wore the dress during a fashion show that took place in Oman. Atallah claims that the wedding dress symbolizes a princess’ purity and a queen’s regal perfection, and the transition of a woman from being a princess into a queen. 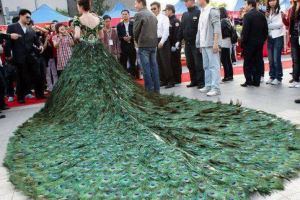 A unique wedding dress that does not conform to the traditional ivory or white dress design. Fashion designer Vera Wang created the dress with 2,009 feathers of male peacocks on a very long and round train, and decorated with 60 Haitian jade stones. The number signified the year 2009 when the dress was unveiled at a wedding expo in Nanjing, China. The gown was completed by a team of 8 designers for 2 months. Critics didn’t approve of the gown’s peculiar appearance, and it was rumored that the dress was made for the wedding of Jennifer Lopez and Ben Affleck that did not push through.

Unveiled in the 2010 Miami International Fashion Week by fashion designer Jad Ghandour and Danasha Luxury, the taffeta-made luxury dress featured 75 carats worth of perfectly cut diamonds from Antwerp, Belgium enclosed in 250 grams of 18 carat gold, and was specifically designed to ensure that the dress still felt lightweight despite the number of precious metals and stones attached to it.

Japanese designer Yumi Katsura showcased a wedding dress made from silk-satin and decorated with zari-embroidery. What made it more valuable are the thousands of pearls that adorn the dress, an 8.8 carat green diamond emblem, and the extremely rare 5 carat white gold diamond (rumored to be part of the only pair of such diamond that existed in the entire world). Created in 2006 with a cost of one billion Japanese yen, it took the crown as the most expensive dress of that date until the Diamond Wedding Dress of Renee Strauss and Martin Katz claimed the title a few months later.

The combined talent of renowned dressmaker Renee Strauss and jewelry designer Martin Katz gave way to the creation of one of the most expensive wedding dresses in existence. The dress was studded with sparkling diamonds the worth of 150 carats, along with the set of rhinestones on the veil. The splendid dress was not made for a bride about to be wed, but instead in commemoration of the 2006 Luxury Brands Lifestyle Bridal Show held at The Ritz-Carlton, Marina del Rey, California. The dress currently holds a spot in the Guinness World Records as the world’s most expensive wedding dress.