What Happened To Freddy Adu – 2018 Updates 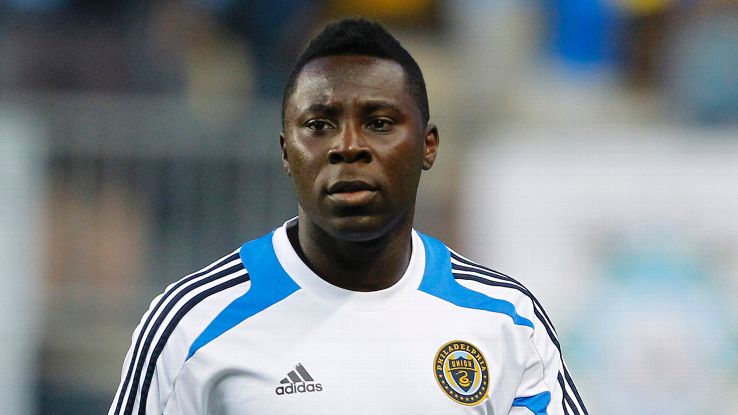 He was called “The next Pelé”. The kind of praise any soccer player would be proud of, but in the sad tale of Freddy Adu the expectations may have been too high, the pressure too much and the results all too predictable for the once titanic player.

Freddy was born on June 2nd 1989 in the port city of Tema, Ghana, West Africa to Maxwell and Emelia Adu who ran a local convenience store. Kicking a ball by age two and playing barefoot pick-up games by six Freddy was naturally gifted at the game. Of course the fact that he played everyday against eighteen year olds may have also helped hone his skills. In 1997 his parents participated in an immigration lottery, set up by the U.S. embassy in Ghana. The Adus won and moved to the states settling in Potomac, Maryland, near D.C.

Shortly after arriving Maxwell left the family. To support her boys Emelia took on two jobs, getting up at 5am each morning and being forced to work seventy hours just to make ends meet. Soccer became an outlet for Freddy, being on the field was a different world for him. In fourth grade one of his friends invited him to play in a local tournament, it was his first time playing an organized soccer event. It was here he was spotted by financial consultant Arnold Tarzy who, within forty eight hours of the tournament had tracked him down and asked him to join the Potomac Cougars.

The Hype of Freddy Adu


Tarzy convinced the young Adu to travel to Italy with the U.S. Olympic development program to compete in an under fourteen tournament. Adu was only ten years old at the time. The U.S. team dominated the competition, Adu scored more points than any other player, most of whom had a few years on him and won MVP. The world of football took notice with big name teams like Inter Milan trying to entice him to come to Italy.

During the following year Adidas came calling with sponsorship deals, eager to have a rising soccer star on their hands to promote their products. Emelia became a grounding force for her son, shoo-ing them away and insisting her son get an education first. Adu was an above average student, winning awards in art and receiving a scholarship at a prestigious boys school in Potomac, were he skipped the seventh grade.

At twelve John Ellinger, then coach of the U.S. Soccer Federation U-17 squad, asked Adu to play in a tournament in Florida. After watching him play Ellinger was astounded, he invited him to train at the Federation’s Soccer Academy, a part of Brandenton, and in 2002, at a few months shy of thirteen years old, Emelia allowed him to attend. He became the youngest member ever of the U.S. U-17 soccer team. After two years there America’s Major League Soccer, MLS, offered him a four year contract with a two year league option, he agreed and was signed on to play for D.C. United for $500,000 per year salary.

Adu came onto the field for the first time with D.C. United as a half time substitute making little impact on the game. He said at the time he was just happy to get the experience over with. He scored his first professional goal two games later against Metro Stars, the youngest player to score in MLS history. He finished the season with five goals and three assists and played in all thirty games. The following season he was relegated to the bench in favor of Christian Gomez and it was in this role he appeared when D.C. United won the MLS cup.

This lack luster performance from the young prodigy took everyone by surprise. He was billed and branded the next U.S. soccer superstar. Remarks about his maturity, his age and the rough edges to his play style emerged. He was still unhappy with how he was being utilized in the squad and an errant comment to the media landed him in hot water with the team. Complaining about his lack of first team football landed him with a one match ban.

In November 2006 he spent two weeks training with Manchester United, though a work permit issue prevented him from playing in any games. Upon returning to D.C. United his improvements to his defensive play gained him a full position on the squads top eleven and he started in all games in the 2006 season.

In December 2006 D.C. United traded Adu to Real Salt Lake. He made little impact at the club and spent a sizable amount of his time with the U.S. U-20 team. He Captained the team to a strong showing at the 2007 U-20 world cup reaching the quarter final stages. His skills attracted the attention of Portugal’s Benfica who would soon come calling with an opportunity he has been waiting for his whole life.

The Downfall of Freddy Adu

Benfica paid two million dollars to transfer him and he made his debut as a substitute against Copenhagen in 2007. His time in Europe was tumultuous to say the least. Seemingly never fitting in with the squad in Portugal he was sent out on season long loan after season long loan. First to AS Monaco, then to Portuguese side Belenenses then Greek side Aris all whilst still under contract with Benfica. He came back to the States for a short two years to play for Philadelphia Union.

Leaving Philadelphia Union in 2013 for Brazilian side Bahia he stayed for a year before moving back to Europe for a series of trials. England’s Blackpool, Norway’s Stabeak, The Netherlands AZ Alkmaar but in the end could not get signed by any of them. He settled with Serbia’s FK Jagodina but could only manage to stay with them for six months. Early this year he signed with Kuopion Palloseura (KuPS) for a one year contract, subject to passing a medical exam. He mainly played for their reserve team.

After exercising an option in his contract with KuPS Adu was approached by Tampa Bay Rowdies coach Thomas Rongen for a position with his squad. Rongen had previously worked with Adu in the US U-20 World cup and noted, despite Adu dismal performance over the last few years, that he had tremendous natural talent and the environments of European football for someone as young and American as Adu were a big part of why he failed to achieve his full potential.

Unfortunately injuries prevented Adu from proving Rongen’s theory for much of the season, and Rongen was fired in August 2015. Adu did see some play and seems to be slowly getting back on form, with three assists in eight games. Just this month Tampa have officially signed Adu up for a one year deal with a club option in 2017. Only time will tell if this is much Adu about nothing.

It seems that during the off season Freddy has been let go by the Tampa Bay Rowdies. They chose not to exercise their 2017 option on the player. He appeared on the pitch for a total of 136 minutes, five appearances with one start. Freddy failed to make an impact at the club and is again a free agent. It is clear he still has a passion for the sport, but it seems his best days are behind him, and at only 27 years old that is a sad thing to say for any sports person.