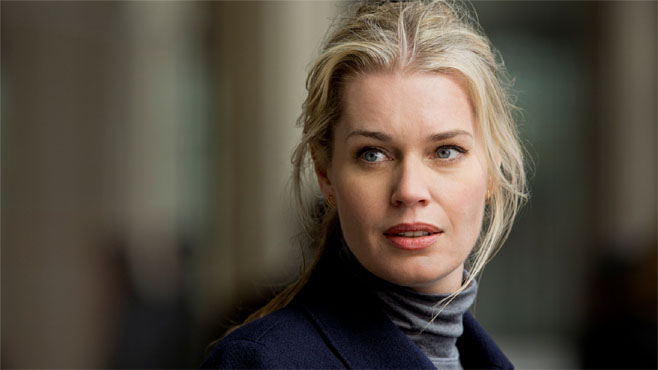 Best known as the mesmerizing Mystique in Marvel’s “X-men” films, Rebecca Romijn rose to prominence in the mid 90s as a model before transitioning into acting in the early 2000s. Walking the runway for the likes of Giorgio Armani and Anna Molinari she shot to international recognition with the 1996 Sports Illustrated Swimsuit issue. After a small role on “Friends” and a brief stint hosting MTV’s “House of Style” her break out performance as Mystique in 2000s “X-Men” garnered her critical acclaim and her career has gone from strength to strength.

Rebecca Romijn, born on November 6th 1972 in Berkeley, California to Elizabeth and Jaap Romijn. Her mother, American born of Dutch descent, was an English teacher and her father, a Dutch native, was a toy maker turned furniture craftsman. Though the couple divorced when Romijn was still quite young, they lived across the road from one another, allowing for a fairly normal life for both Rebecca and her sister Tamara in the carefree hippie capital of the world. A star even then she was always performing in some capacity but it wasn’t until High School that she really began to shine, appearing in several Gilbert and Sulivan Shows, singing in chorus’ and even attended the “Oakland Youth Chorus”, founded by Singer Bobby Ferrin.

From there she went on to study music at the University of Santa Cruz. However, as soon as she got accepted she was stopped caring, she felt that it had become just a place to meet her friends. After a year of study, majoring in Voice, she was persuaded by a Parisian model scout to try a career in front of the camera. 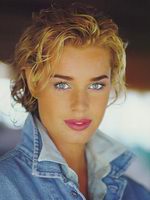 When the offer to go to Paris and begin her career came she was on a plane within three days. She spent the next three years in Paris learning the language and appearing on the covers of Elle & Marie Claire. Despite these successes she never saw herself as a supermodel and would soon grow dissatisfied with the industry. In the mid nineties she saw work begin to dry up as her modelling agency had her cut her hair short. She also became fast friends with Tyra Banks, Tyra calling her one of the funniest people she knows, a trait that would come to the fore in a few short years.

She met husband to be and “Full House” star John Stamos in 1994 at a Ghost Fashion show and over the next few months kept bumping into to him at various events. Sparks flying from their first meeting they began dating on her 22nd birthday. Two months apart, her in New York and him in Los Angeles, put their relationship on hold but come Christmas they were reunited and had their first date at Disneyland. They married in 1998 and divorced in 2004. Romijn is now happily married to Jerry O’Connell, they have two young daughters. Deciding that she had gotten all she could out of modelling, in 1997 Rebecca moved on to acting.

Rebecca’s first major acting role was the character of Cheryl in the sitcom “Friends”. Showcasing her comedy chops early, her performance as the sloven girlfriend of Ross was both funny and well received. Continuing to show hitherto unknown range in 1998s “Dirty Work” where she appeared as the antithesis of a runway star, a bearded lady. While the film was critically panned Ms Romijn was at least not shying away from atypical roles.

Her big break came in 1998 as the host of MTV’s “House of style”. Her original audition did not impress the casting agents, but her insistence that she could perform well, and straight up begging, landed her the gig. She was an instant success, speaking at the time on how she would rewrite the scripts with her husband and comedian friends. The show made her exponentially more famous and garnered her a following with teenage girls everywhere. The success of her “Friends” appearance attracted the attention of producers at NBC who offered her a recurring role in their hit sitcom “Just Shoot me”. This was all just build up to something grander, in 2000 she starred in X-Men.

Romijn brought her characteristic sex appeal and athleticism to the role of Mystique, the blue bodied, shape shifting dragon of Magneto. Though she had little dialogue she did well in bringing a personality beyond the near naked painted costume she had to wear, a total of eight hours in the make up chair. The role brought her true international stardom and cemented her as a force to be reckoned with within the sci-fi fantasy landscape. Two sequels, the first of which was even more critically acclaimed than the first, brought her evermore recognition. She also appeared in “Femme Fatale” in 2002 and “Godsend” in 2004.

To match her success in film her achievements on the television were nearly as impressive. In 2006 she played transgendered ex-CEO of Meade publications Alexis Meade in “Ugly Betty”. Receiving a nomination for a screen actors guild award and glowing reviews from Slate magazine, citing her as the main reason they were looking forward to the oncoming season. Bit parts in “Drawn Together” and “Carpoolers” gave way to “Pepper Dennis”. This would be her first starring role in television and would also be very short lived. Only thirteen episodes of this dramedy were produced before it was axed in the wake of the CW-WB transfer. Her next role would be “Eastwick”.

Where is Rebecca Romijn now?

After the early cancellation of “Eastwick”, a fantasy drama based on the popular “The Witches of Eastwick” novels by John Updike, in 2010 her career slowed. What followed was a series of one off roles in the likes of “Chuck” and “Special Agent Oso” and an uncredited cameo in “X-Men: First Class” in 2011. A role in 2012’s “Good Deeds” did little to help as the film opened to mixed reviews. 2013 saw another cancelled show in “King & Maxwell”, a police procedural based on the novels of David Baldacci.

2014 saw a rise from the ashes for Rebecca with not one, but two ongoing series. First as the host of Game Show Network’s “Skin Wars”, a reality show where the contestants must perform challenges against each other involving body paint judged by Robin Slonina, Craig Tracy and the incomparable RuPaul. Second The TNT adventure series “The Librarians”. Rebecca plays the lead character Eve Baird, former NATO agent. Critically acclaimed performances for the main cast and a third season renewal under its belt it looks like this show is here to stay.

In 2015 she appears in “Key & Peele”, “Adventure time” and a guest judge on fellow “Skin Wars” cast member “RuPaul’s Drag Race”. She kicked off 2017 with a vacation for herself and her family.  In light of these recent developments it certainly seems that Rebecca Romijn will be around for a long time to come.