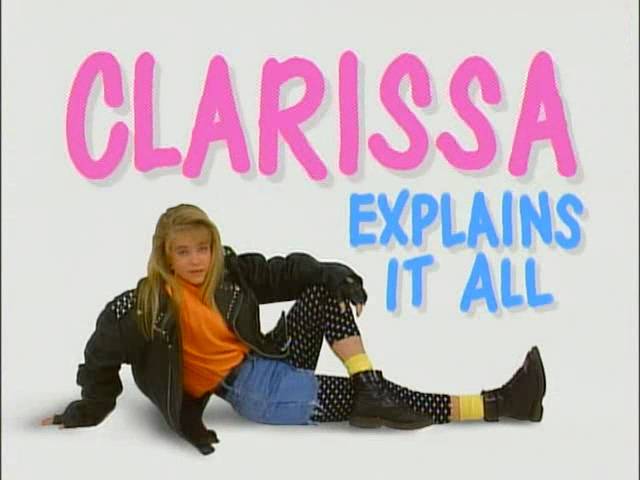 Remember the theme song? The teenage girl with wacky parents and an annoying brother?

Perhaps one of the most well-known sitcoms in Nickelodeon was Clarissa Explains it All, starred by Melissa Joan Hart. Aside from that, she was also known to be a spell-slinging teenage witch named Sabrina. Before those big roles, you might be wondering how she started in the world of acting, and what is she up to now during these recent times.

Read on and find out:

Melissa Joan Hart was born to parents William (a clam and oyster breeder) and Paula Hart (a baby clothes saleswoman) on April 18, 1976 in Smithtown, New York. Later on they moved to Sayville.

At an early age Melissa made it clear that she wanted to appear on television. She was inspired by the ending monologue of the children’s television show Romper Room where the host recited a rhyme and called the names of kids through the “magic mirror”. After the birth of her second sister, Elizabeth, Melissa and her mother went to New York City to try their hand on auditions for commercials. Thanks to the young girl’s talent (and to her lucky dress, as she claimed), Melissa was able to book her first appearance in the advertisement for the bathtub toy Splashy.

From there on, Melissa began to have many other television commercial appearances. Her four other siblings were also given exposure in the world of acting, and their mother became their talent manager of sorts. Melissa balanced her school life and acting, the latter which required frequent trips to the Big Apple. Her first appearance on a television series was in 1985 on an episode of ABC Weekend Specials, an anthology series that adapted popular children’s books, followed by playing a role in the miniseries Kane & Abel also in 1985.

In 1986 she guest starred in the crime television series The Equalizer, and in the soap opera Another World. Her first major role was also in that year where she played the role of Amy in the family drama television movie Christmas Snow with Sid Caesar and Katherine Helmond.

The turning point of her career began in 1989 when she auditioned for the Nickelodeon comedy series Clarissa Explains It All. She got the role in 1991, and as a result she moved to an apartment in Orlando, Florida for the filming of episodes. Melissa did not attend high school during this time, instead she relied on tutors so she can catch up on her education. Her parents divorced, her father remained in Sayville while her mother and four siblings moved to New York City. She also appeared in an episode of Are You Afraid of the Dark? in 1993.

Clarissa Explains It All deals with the titular Clarissa Darling, a teenage girl who talks about her life by breaking the fourth wall. It was the first Nickelodeon series with a female protagonist, and it was highly successful as well. Melissa won awards and received nominations for her performance in the show. While in character she recorded This is What ‘Na Na’ Means, a pop rock album, and a narration of the Russian composition Peter and the Wolf.

After five seasons and 65 episodes (and since Melissa was getting older for a show that focused on pre-adolescence), the show wrapped up in 1994, and Melissa had her own “graduation” on the show’s set with the help of crewmembers. A spin-off series was planned, titled as Clarissa, which focused on the character’s college life, but it was instead turned into a television movie with Clarissa as a newspaper intern. The novel Things I Can’t Explain by Mitchell Kriegman serves as the sequel for the show as it explores Clarissa’s mid-twenties life, and the book was released on November 2015.

Melissa went to the Big Apple to stay with her mother, stepfather, and siblings after the show was done filming.  She attended New York University while still making appearances on television, such as in Family Reunion: A Relative Nightmare, Touched by an Angel, and Weinerville.

As her mother and stepfather were fans of Archie Comics, Paula noted Melissa’s resemblance to one of the characters namely the teenage witch Sabrina. This inspired her to work as an executive producer on the television movie Sabrina the Teenage Witch. Aired in 1996, it proved to be quite a hit, and television network ABC expressed interest in continuing the story of the witch in the form of a television series.

The Sabrina the Teenage Witch television series again made Melissa move, from New York to Los Angeles, but this time she was with her family. New York University’s study-abroad program ensured that Melissa’s education was not put on hold by her career.

While filming for the show’s episodes, Melissa made appearances in other television shows as Sabrina in Clueless, Boy Meets World, ABC TGIF, You Wish, and Teen Angel, in Just Shoot Me! and That ’70’s Show as different characters, and released the single “One Way or Another” in the soundtrack Sabrina the Teenage Witch: The Album.

She also took roles in television movies namely Twisted Desire, The Right Connections, Two Came Back, Silencing Mary, Can’t Hardly Wait, Love American Style, The Specials, and Not Another Teen Movie, appeared on magazines such as Maxim while wearing lingerie, and directed an episode of the series So Weird and Taina. She provided voices for animated shows and movies like Superman, Recess: School’s Out, and Batman Beyond: Return of the Joker. She was also good friends with Britney Spears and even appeared in the singer’s music video of “(You Drive Me) Crazy”, the soundtrack of 1999 romantic comedy film Drive Me Crazy where Melissa starred alongside Adrian Grenier.

Just like in Clarissa Explains it All, Melissa bagged awards and received nominations for her work as Sabrina. The character’s popularity also led to the creation of the video game Sabrina, The Teenage Witch: Spellbound, television movies Sabrina Goes to Rome and Sabrina Down Under, where Melissa was a producer as well, and an animated series with Sabrina voiced by Melissa’s younger sister Emily while Melissa provided the voices of Hilda and Zelda Spellman.

Sabrina the Teenage Witch ran for seven seasons, the first four on ABC while the last three were aired on The WB, and the series ended in 2003. After the show Melissa focused on starting her own family. She married her boyfriend Mark Wilkerson, the lead singer of alternative band Course of Nature, on July 19, 2003. Their wedding preparations were documented and aired as Tying the Knot, directed and produced by Paula.

Melissa as a Mother – The Adult Life

Melissa gave birth to her first child, Mason Walter, on January 11, 2006, followed by Braydon on March 12, 2008, and finally Tucker on September 18, 2012. She stated in an interview that her family are devout Christians, and she and Mark are teaching the three kids regarding the importance of faith.

Melissa still kept busy by directing her first short film Mute (2005) with Emily as the lead, making television series appearances and voiceovers (North Shore, Justice League, Law & Order: Special Victims Unit, and Robot Chicken) starring in several films and TV movies (Rent Control, Jesus, Mary, and Joey, Dirtbags, The Secrets of Pine Cove, Holiday in Handcuffs, My Fake Fiance, Nine Dead, Satin, and Santa Con) and starting the production company Hartbreak Films, Inc. with her stepfather and mother. She competed in the ninth season of Dancing with the Stars with Mark Ballas but was eliminated during the sixth week.

Melissa made one of her childhood dreams come true in 2009 when she opened her own candy shop named SweetHarts. However it is now under new management since 2011 after Melissa was accused of many labor problems including racial profiling, and unlawful business practices.

Along with Joey Lawrence, Melissa starred in the sitcom Melissa & Joey with the pilot aired on August 17, 2010. She directed several episodes, and served as among the show’s executive producers. She also appeared in episodes of When I Was 17, Motor City Masters, and The Mysteries of Laura.

Her book, Melissa Explains it All: Tales from My Abnormally Normal Life, was released in 2013. Here she revealed some of the wild things that she did back in her teenage years, from experimentation with different kinds of drugs (she admitted that she was high during her Maxim photo shoot), to her lip locking escapades with several big names like Ryan Reynolds and Nick Carter. During this year she also initiated a campaign to raise funds for a movie Darci’s Walk of Shame but it failed to meet her budget goal of $2 million (only raising up to $51,605).

What is Melissa Joan Hart Doing Now in 2018

Melissa & Joey aired its last episode on August 05, 2015 after its cancellation. It won the Favorite Cable TV Comedy award during the 2015 People’s Choice Awards.

Melissa stars in the upcoming Christian film God’s Not Dead 2 as school teacher Grace Wesley. The film is slated for an April 01, 2016 release.

Along with her husband Mark, Melissa started King of Harts, a fashion line focused primarily on boys. As stated in their website, they actively support the non profit organization Youth Villages.