What Happened To Miss Colombia – After Miss Universe Update for 2018

Miss Universe has always been a cultural spectacle, but with Steve Harvey’s gaffe at the 2015 competition, it became watercooler conversation. Harvey crowned Miss Colombia as the winner of the competition, moments later being corrected and announcing Miss Philippines as the winner.

There’s been a lot of commentary on the gaffe itself, but what happened after? Miss Philippines obviously won the competition, and has been doing the public circuit, recently appearing at New York Fashion Week. But what about the first runner up, Miss Colombia?

Born on Christmas Day in 1993, Arianda Gutiérrez-Arévalo is the youngest of five children, and has been a professional model since she was a kid. Known for loving pussy (cats) and pickles, the winner of Miss Colombia 2014 is a cousin to Miss Colombia 2013, and Miss Universe 2014. 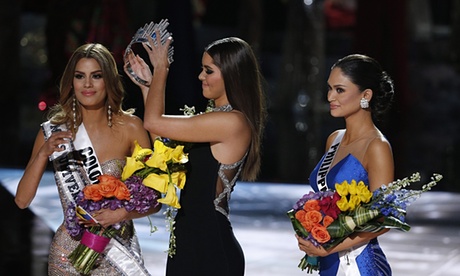 Vega had to take the crown off Miss Colombia’s head

On November 17, 2014, 20-year-old Gutiérrez represented the Sucre Department in Colombia’s 80th Miss Colombia pageant. Notably, her win was the first for the Sucre region.

At Miss Universe 2015, Gutiérrez represented Colombia, and was initially announced as the winner of the pageant, with Miss Philippines, Pia Wurtzbach, being announced as 1st runner-up. The ceremony involves the previous Miss Universe (Paulina Vega, Miss Colombia’s cousin,) crowning their replacement.

Vega had already crowned Gutiérrez before the mistake was noticed, and had to take it back and hand it off to Miss Philippines. The broadcast ended abruptly, giving the Internet plenty of time to contribute their commentary.

Miss Colombia After the Gaffe

In America, most of the online discussion was about Steve Harvey, lightheartedly mocking his flub. But in Colombia, the conversation was a bit more sophisticated. #MissUniverse2015 had already been trending on Twitter, with both the Colombian president and his political opposition tweeting their support when Miss Colombia was mistakenly crowned.

Soon the hashtag was replaced by #LaCoronaSeRespeta, #TheCrownMustBeRespected. Many Colombians were upset because, for a brief moment, Colombia had won the contest two years in a row. Regardless, Gutiérrez didn’t win Miss Universe.

So what’s she doing now? A couple weeks after the event, Gutiérrez appeared on The Steve Harvey Show, Harvey’s daytime talk show. While she was the epitome of a gracious loser on that broadcast, Ellen DeGeneres showed their unaired antics, where Miss Colombia “beats up” Steve Harvey.

Since the pageant, Miss Colombia has returned to her home in Bogotá, and while she may have been a good sport for the American media, she’s reportedly been more critical of the pageant and Harvey on Colombian radio.