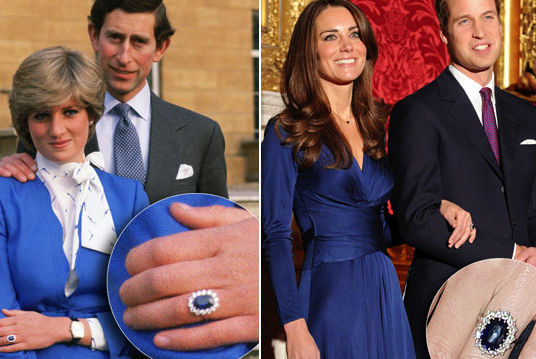 Engagement rings are probably one of the most frightening purchase that any one person will ever make. Women daydream about what theirs will look like and fawn over the glistening gems that fit the fingers of their friends and family. Men bite their nails as they are bestowed with the pressure of picking out just the right design and cringe at the lightness of their wallets and bank accounts after the purchase has been made. These little pieces of jewelry mark an exciting period in any couple’s relationship, but there will always be a little room for envy when royalty and celebrities announce their engagements on television and flash their insanely expensive engagement rings. Here we are going to take a closer look at the rock-sized gems and carefully crafted rings that add up to the top 10 most expensive rings in the world. 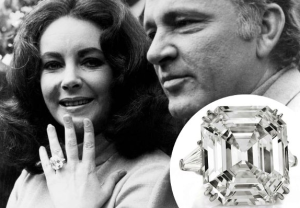 At the top of the most pricey engagement rings out there is Elizabeth Taylor with her Asscher-cut Krupp diamond ring. This particular ring is a whopping 33.19-carat and a certified Type IIa diamond. Type IIa diamonds are the most chemically pure of diamonds and have stunning optical transparency. Elizabeth Taylor received this from her two-time husband Richard Burton who spent around $8.8 million on this beauty. After her death, Elizabeth Taylor’s engagement ring was auctioned off and sold to an anonymous Asian collector.

Second on the list is the gorgeous 18-carat octagon-cut diamond that Jay-Z proposed to his tri-talented wife Beyoncé with. Designed by the jeweler Lorraine Schwartz,  this engagement ring is set in a platinum split base and prices around $5 million. This diamond has such a high quality that it has been certified as an exceptional, premium stone.

In May of 2005, celebrity Paris Hilton was proposed to by Paris Latsis, her now ex-fiancé, with a huge 24-carat white gold ring that is worth around $4.7 million. Placed between two triangle cut baguettes, the centerpiece of this ring is a sizeable rectangular diamond. The ring was so large that Paris claimed it hurt her finger to wear it. When she and Paris Latsis eventually separated, as a way to earn money for Hurricane Katrina victims, the ring was auctioned off.

Fourth on the list, a 10.47 carat emerald-cut diamond, belonged to the beautiful American actress Grace Kelly. Prince Rainier III of Monaco proposed to her with this stunning diamond that was centered between two diamond baguettes. This engagement ring values in at about $4.06 million.

During her engagement and marriage to Marc Anthony, Jennifer Lopez adorned her ring finger with a stunning 8.5-carat blue diamond. This piece was designed by the jeweler Neil Lane and mounted on a delicate type of metal. Priced at $4 million, this engagement ring is claimed to be one of the rarest and most prized jewelry pieces in Jennifer Lopez’s collection of accessories,

Bought from the expensive House of Graff in London, Melania Knauss received a gorgeous emerald-cut diamond engagement ring from her husband Donald Trump. This 15-carat diamond is set on a platinum basket and flanked by baguettes and a leaf-like design. The estimated value of this pretty piece of jewelry is around $3 million.

Aristotle Onassis proposed to his wife with a breathtaking Lesotho III diamond ring that was one of the only 16 cuts from a huge 601-carat diamond discovered in South Africa. This particular ring is a 40.42-carat diamond ring that was only worn by the woman twice and spent the rest of its time locked away in a New York bank vault. The price of this ring is $2.6 million. 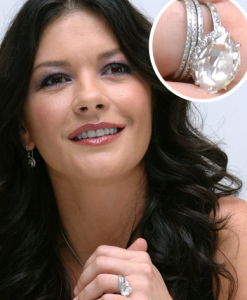 A vintage diamond worth around $2.5 million, Catherine Zeta Jones received this piece from her husband Michael Douglas. Set horizontally as the centerpiece of the ring is a 10-carat marquise-shaped diamond that is surrounded by 28 smaller stones that accentuate it. Because of its elegant design, this engagement ring gives off a very vintage 1920s vibe, making it a beautiful piece for a beautiful woman.

Once she became engaged to famous Latin pop artist Enrique Iglesias, Anna Kournikova also became the lucky owner of a beautiful Argyle Jewelers engagement ring that prices at $2.5 million. At the center of the ring is a natural pink 10-carat pear-cut diamond that has two Trillian stones on either side of it. Due to its light pink color and cut, this engagement ring has a very sweet and sophisticated appearance. 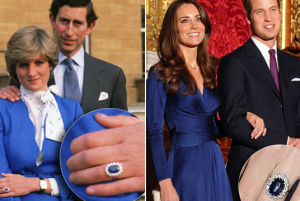 Last on the list of most expensive rings is Kate Middleton’s Gerrard engagement ring. Originally worn by Prince William’s late mother, Princess Diana, this particular ring is said to be one of the most famous engagement rings of all time. An 18-carat Blue Sapphire is set at the center of the piece and is fringed by 14 small white diamonds. Going against royalty standards, this ring is worth around $137,200 and not considered to be all that extravagant, but the sentimental value gives it its fame. So, despite being the last on the list, this ring is perhaps one of the most memorable.