Minecraft is a highly-popular game that serves as the perfect medium for creativity. Just like your LEGO bricks you can fulfill your fantasies of creating huge and intricate structures in this game. Millions around the world have enjoyed it and it seems that its popularity is still on momentum.

With the advent of YouTube gamers have come to upload songs about their favorite video games with accompanying music videos. Minecraft aficionados who wanted to make original songs or parodies saw the potential of making elaborate videos with pixilated blocks and a cast of in-game characters and hostile mobs. Now these songs have garnered thousands of views, likes and dislikes, and have been included on albums in iTunes.

Without further ado here is our list of Minecraft songs that may inspire you to create your own.

Some Minecraft players become too attached to their beloved mansions. And there are those who treat their livestock as if they are part of the family.  “Gimme Back My Pig” tells the story of a playful young girl whose beloved swine was stolen by greedy villagers and sold off to zombie pigmen. Now she embarks on a quest with her horse and a diamond sword as she searches far and wide for that pink little pork.  The song was uploaded last December 22, 2015 and has amassed more than 4 million views on YouTube. 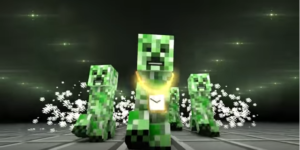 The Creeper from Minecraft is a notorious four-legged green mob that detonates when approached. It is the bane of many players especially when one (or three) appear behind you and explode without warning, leaving behind a crater and draining much of your health while giving Michael Bay dozens of booming ideas for a movie adaptation. This song features a bling-wearing Creeper as he raps about the horrors induced by his kin upon the innocent inhabitants of the Minecraft world. The rap was uploaded on March 31, 2014 with over 13 million views. The song’s actual title on iTunes is “Boom Boom Boom Boom Boom Boom Boom Boom Boom Boom Boom Boom Boom”. 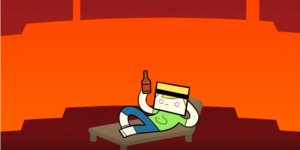 The Nether is considered to be the Minecraft version of Hell. Rivers of lava flow freely while some of its hostile inhabitants make the place a lot more dangerous. What makes it very appealing to players is the chance to harvest resources that are exclusive in that fiery realm. “Screw the Nether” initially sings about the perks of the Minecraft underworld until the singer falls on lava, making him regret his stay. The song was uploaded on August 31, 2012 with 35 million views. It parodies Maroon 5’s “Moves like Jagger”.

Uploaded on November 13, 2012 “Like An Enderman” talks about the titular mob to the tune of “Gentleman” by Psy. If you are not familiar with this Slenderman lookalike then it is a lanky and shadowy humanoid with two blue eyes on a box-shaped head. Endermen just stand around passively unless you look at them directly. Doing so will cause them to teleport towards your location and beat you to death. Their inclusion to the game has caused many instances of horror where Endermen suddenly pop up next to the player who obliviously provoked the creature, especially as they are hard to spot in dimly-lit areas. The song has gained 49 million views. 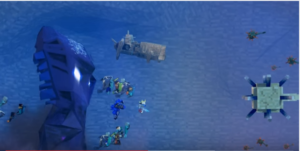 “Atlanteans” features a cast of unique Minecraft characters as they hop on submarines to escape from an invading horde of Creepers. They proceed to Atlantis where they are attacked by aquatic creatures which they fight off with magic and a giant squid. The song is set to the tune of “Titanium” by David Guetta. With 13 million views since its upload on August 13, 2015, “Atlanteans” feels like you’re watching a battle scene from a science fiction / fantasy movie.

The music video of “Sugar” by Maroon 5 features the band crashing on weddings to play the song much to the delight of surprised fans. “Villagers” parodies that song and shows a troop of mobs led by a zombie (probably an undead Adam Levine) as they march into a village and sing about the different ways on making its inhabitants as delectable as possible, much to the frustration of the villagers who are scared out of their wits. The song has gathered 7 million views since its posting on April 24, 2015.

I originally listened to “Revenge” years ago where the song was parodying Usher’s “DJ Got Us Fallin’ in Love”. Due to copyright reasons the song was changed to an original but the video remained the same. It was uploaded on August 19, 2011 and shows a miner who, after a horrifying encounter with a Creeper, trains and arms himself to cull the explosive creatures that roam around his home. The song has gained 161 million views. You can still watch the version with Usher’s song on YouTube uploaded by a different user.

The song parodies the hugely-popular “Let It Go” from Frozen both in song and music video. It shows a pyromantic counterpart of Elsa as she utilizes lava to create a castle in the Nether including a fiery version of Olaf. The structure assembles in all its scorching glory and “pyro Elsa” is wreathed in a bright orange gown of fire. “Let It Glow” was uploaded on July 01, 2014 with 27 million views. 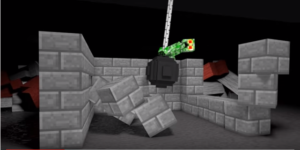 Miley Cyrus’ “Wrecking Ball” made quite a wrecking impression upon the masses thanks to its music video. “Wrecking Mob” features a Minecraft character in underwear singing about how Creepers “wrecked” his perfect home to the tune of Miley’s hit song.  And yes it features a Creeper riding a wrecking ball. The frustrated character builds his next home in outer space until misfortune propels him back to Earth. Inevitably he flips out after being constantly stalked by a gang of Creepers.  The song made its way to YouTube on November 05, 2013 and so far gained a view count of 35 million.

“Fallen Kingdom” was uploaded on April 01, 2012 with a view count of 99 million. The song parodies “Viva la Vida” by Coldplay. Its music video shows a king who is worried about keeping his kingdom protected from the hostile mobs. Later on it was besieged by monsters after an intruder breached its walls. The king along with the queen and their infant son attempt to escape the chaos, until tragedy strikes and the video ends in a cliffhanger. Its lyrics make mention of Herobrine, a famous urban legend in Minecraft . This is regarded as the most iconic of all Minecraft songs.

One year later a sequel was released named “Take Back the Night”.  Its video shows the aftermath of the siege where the men find the king’s son unconscious in the castle. He is taken to a village where he grows up to be an adept fighter. His abilities are put to the test when hostile forces swarm his village. Unfortunately he fails to save his mentor. Later on he embarks on a revenge mission to take back the night from Herobrine himself.

“Find the Pieces” is the third song that continues the story of the unnamed hero. Uploaded on April 25, 2015, it shows the protagonist’s quest after catching a glimpse of his father surviving the plunge from the first song. He embarks to his hometown but first saves a city from an attacking Wither (a three-headed Minecraft mob). Eventually he comes upon the ruined shores of his father’s kingdom where he finally meets his old man, alive and well. It seems that there is still a continuation as the antagonists, a race of humanoid pigs dwelling in the Nether, gear themselves for an invasion of the upper world.

The song is great and the story is interesting, not to mention the quality of work on the videos. Do watch it if you have the time.

Do you like these songs and their music videos? Or do you know other Minecraft songs that are worth mentioning? Let us know in the comments below.