What happened to Grant Imahara – 2018 News and Updates 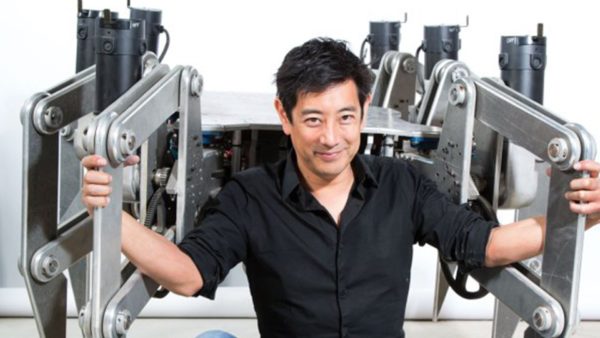 What happened to Grant Imahara – News and Updates

Science, robots and explosions. If three words could sum up the past decade for Grant Imahara, it would likely be these. Since beginning work as a cast member for Discovery Channels wildly popular show Mythbusters, Grant Imahara has become a household name to anyone interested in debunking urban legends, or wiping a cement truck off the planet with plastic explosives. While his departure from the show in 2014 alongside Tory Bellici and Kari Bryon marked the beginning of the end for the award winning series, it appears Imahara may still yet be going strong. Let’s see what he’s been up to in 2016.

Long before Grant had proven himself an invaluable member of the Mythbusters team, he was recognized as a natural born engineer and robotics technician. Originally getting his geek on at the University of Southern California, Grant Imahara earned a degree in electrical engineering while occasionally moonlighting as an assistant to the university’s cinematic arts program professor, Tomlinson Holman, inventor of the Lucasfilm THX sound system.

It was through this working relationship with Holman that Imahara had decided on working primarily in entertainment and film while using his skills as an engineer, instead of more classic career paths. Immediately after graduation, Lucasfilms THX acquired him as an engineer for their visual effects division, where he was credited in many films including Galaxy Quest, The Matrix Reloaded, and most notably the Star Wars prequel series. Most notable among his various projects for each film was his remodeling of the classic Star Wars droid R2D2, which at the time of the prequels had been aging quite poorly. Revamping of robots certainly didn’t stop at just the big screen however; Grant has also created and used a robot equipped with a pneumatic hammer in the gladiatorial Battle Bots series, and after the fights even used the so called “Deadblow” in several episodes of the show that made him a household name.

First hired by longtime friend and sometimes employer Jamie Hyneman (as well as fellow Battle Bot builder), Grant Imahara joined Mythbusters as first and foremost a robotics expert. Whether asked to create a robot to instigate a guard dog using a taxidermied cat, a robot to surf, or to bring out Deadblow to drop the hammer, it seemed that he always had something up his sleeves.

While shy and quiet when compared to most of the Mythbusters team, he was often seen to be excitable and at times giddy about his creations. Co-star Kari Bryon had been once quoted to say that she was concerned that “Grant is making a robot army” as a result of the show, with which he would have likely agreed. Even during his off time while working on Mythbusters, he had managed to create a key component of the Energizer Bunny mascot robot, a robotic sidekick for Craig Ferguson on The Late Late Show, continually mentored the Richmond California High School Robotics Team, and even was the author of a robotics construction guide, Kickin’ Bot: An Illustrated Guide to Building Combat Robots. On August 21, 2014 Grant and costars Kari Bryon as well as Tory Belleci were all announced to be leaving Mythbusters and have since moved to even more ambitious projects.

While Grant has certainly never left his roots in circuitry behind, recently he certainly has branched out. During his final years on the Mythbusters crew Imahara began to let his inner nerd shine, appearing in such shows and movies as Sharknado, the gaming series Tabletop, and even the 2nd annual Geeky Awards. These positions put him at the forefront of the scifi and gaming culture, as did his role as Mr. Sulu in the Star Trek Continues web series. This exceptional work was apparently recognized by the film community as well. In 2015 he accepted a role in another fan made Star Trek piece, Star Trek: Renegades which was met with mostly positive reviews. While continuing such side projects have been an obvious source of joy for Grant, he has also replaced the revenue lost by leaving Mythbusters through some more commercial means. First and foremost in this was his signing on as a McDonald’s spokesman showing preparation methods of the chain’s fast food, from how McNuggets were made to the patty process.

Alongside the duties that come with being a burger ambassador, Grant has also managed to reunite with fellow Mythbusters alumni Kari Bryon and Tory Belluci to form a yet unnamed television series. Judging from photos posted on the trios Twitter accounts however, fans can rest assured that there will be gadgets, science and destruction galore. Since studio filming has begun as of May 23, we can likely see what trouble these three will be getting into by this fall or the subsequent season.

Not everything has been calculations and big red buttons for Imahara, however. Several months ago, the news site TheMarySue had released a piece on the culprit of the 2014 hack on celebrities that leaked a multitude of nude photos and featured and animated gif of Grant. Unfortunately, a sizeable number of readers assumed that Grant had been involved in the hack and there was a minor back and forth between himself and the content creator, ending in his image being removed from the post. Luckily for fans of his work, this conflict didn’t explode into something more devastating, and left Imahara’s career and reputation intact. Speaking of things potentially devastating, Grant has also been recruited by the United States MegaBot team as a consultant in the making of their giant robot, which is destined to fight an equally giant robot made by Japan’s Suidobashi Heavy Industry. At time of writing, the exact date of the battle has yet to be announced, but promises to be the stuff of mechanical legend.

While we are now years past the glory days of the show where he got his onscreen start, it is easy to imagine that Grant Imahara is still a rising star. Between his roles in television, web series, commercials and possible even movies down the road, it is very possible that he could have this momentum carry him even further into celebrity status, bringing an interest in science and technology as well.