What Happened to Naomi Campbell? Where is She Now? 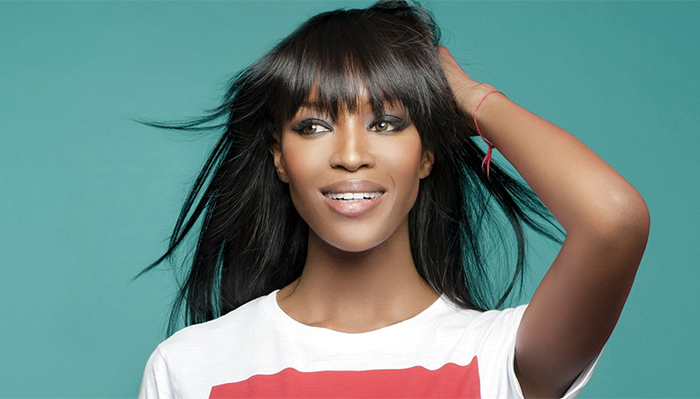 Naomi Campbell is one of the world’s most recognizable and sought after supermodels in the fashion industry. First entering the modelling world at the age of 15, she was the first black woman to be featured on the cover of the French Vogue Magazine. In addition to being a well established model, Campbell is also a singer and actorーshe has released an R&B Pop studio album titled, “Baby Woman” and has made various appearances in both television and film including “Invasion of Privacy”, “The Call” and “Karma, Confessions and Holi”. The model has also released her own line of perfume and cologne since 1999.

The attractive super model has also been involved in several charity groups, including the “Nelson Mandela Children’s Fund” and “Breakthrough Breast Cancer”. In 2005, Campbell also started a charity herself called  the “Fashion for Relief”, which helped to organize fundraising fashion show events in order to help those affected by Hurricane Katrina. In recognition for all her charitable work, she has been named an ambassador of Rio de Janeiro, awarded the Honorary Patronage of Trinity College’s University Philosophical Society and has been presented with the “Outstanding Contribution” award from Elle for her work with the White Ribbon Alliance.

Having been declared a “supermodel” by the fashion industry, it’s no doubt that Campbell was one of the most famous models in the world back in the late 1980s and 1990s. But what has she been up to now? Is she still walking the catwalk in 2016?? What happened to Naomi Campbell? Where is she now? Well, one thing’s for sure, this supermodel doesn’t look her age at all! 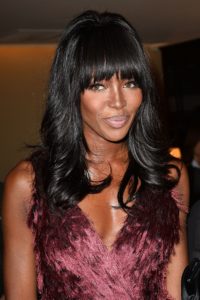 Born on May 22, 1970 in Streatham, South London, Campbell was the daughter of Jamaican dancer Valerie Morris and an unnamed father. Due to the fact that her biological father abandoned her mother when she was four months pregnant, she has never met her fatherーthis is also in accordance to her mother’s wishes. Her mother eventually remarried, and she took on the surname of “Campbell” from his step-father. She has one younger half-brother named Pierre who was born in 1985. Campbell is of African-Jamaican and Chinese-Jamaican descent.

During her teen years, Campbell spent a few years living in Rome, where her mother worked as a modern dancer. Upon returning to London, Campbell was left in the care of a few close relatives as her mother busied herself travelling across Europe to work with the dance troupe Fantastica. When Campbell was three years old, she attended the Barbara Speake Stage, and a few years later at the age of ten, she was accepted into the Italia Conti Academy of Theatre Arts for ballet. 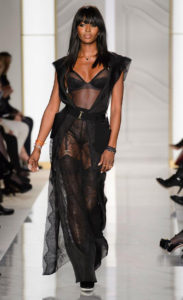 Campbell made her first public debut in 1978, when she was featured in Bob Marley’s music video, “Is This Love” at the age of seven. A few years later, she also starred in one of Culture’s Club music videos, “I’ll Tumblr 4 Ya” as a tap dancer. However little did she know at the time, that she was about to be met with a successful modelling career. In 1986, while Campbell was attending the Italia Conti Academy of Theatre Arts, she was scouted by head of the Synchro Model Agency, Beth Boldtーwho was doing some window shopping in Covent Garden. This meeting would ultimately propel her into a successful modelling career. Shortly after in April 1986, Campbell’s modelling career took off as she appeared on the cover of the British Elle Magazine just before her sixteenth birthday.

Campbell’s work as a model over the next few years were met with great success. She did the catwalk for several big-name designers including Gianni Versace, Azzedine Alaia and Isaac Mizrahi. By the end of the 80s, Campbell had formed a modelling “trio” along with Christy Turlington and Linda Evangelistaーthe three girls became the most recognizable fashion models of the generation. 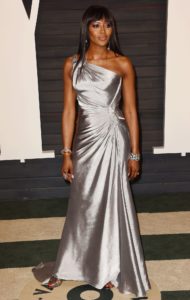 Campbell was eventually declared as a “supermodel” by the fashion industry in the 90s, alongside Turlington, Evangelista, Crawford and Schiffer. The elite group later welcomed newcomer Kate Moss and collectively, were known to the modelling world as the “Big Six”. In January 1990, the model was also announced to be “the reigning mega model of them all” by Interview Magazine.

Campbell later started to embark on other entertainment related ventures during the mid 1990s. In 1994, she wrote a novel titled “Swan”, which focused on a supermodel dealing with blackmail; the book was later revealed to have been ghostwritten by Caroline Upcher. Unfortunately, the novel was met with poor reviews. Later that same year, Campbell released her first studio album, “Baby Woman”. Produced by Youth and Tim Simenon, the album ultimately suffered a fate similar to the novel and was met with generally negative reviewsーalthough it was a commercial success in Japan.

Naomi Campbell and the End of the Supermodel Era 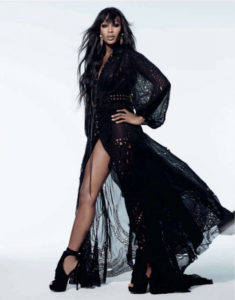 By the end of the 1990s, Campbell found herself mostly retired from the catwalk lifestyle although she did continue with her work as a print model. She also launched her line of fragrances in 1999, after signing her first cosmetics contract with Cosmopolitan cosmetics. The following few years, Campbell made small appearances for various magazines, including the on the Millennium Issue of American Vogue, Playboy and the British Vogue.

After more than 20 years of working as a model, Campbell was still highly sought after in the 2000s. She walked the catwalk for Dior’s anniversary fashion show at Versailles in 2007 and also appeared with fellow black models Liya Kebede, Sessilee Lopez and Jourdan Dunn on the cover of the Italian vogue in July 2008. In 2011, she appeared alongside Liya Kebede and Iman and was featured on the cover of the Essence Magazine. The model was also featured as a Duran Duran frontman in the music video, “Girl Panic!” that same year.

Besides standard modelling gigs, Campbell also made an appearance at the closing ceremony of the 2012 Olympic Games, performing alongside Kate Moss and other fellow supermodels by modelling haute couture to represent British fashion. In 2013, the supermodel ventured into television once again when she became involved in the competition reality show, “The Face” as a coach and judge. The modelling competition series followed three supermodel coaches as they competed with one another to find “the face” of a brand of make up. The show premiered on February 12, 2013 and ran for two seasonsーboth of which featured Campbell as a judge.

In 2014, Campbell was once again featured on various fashion magazines including Vogue Australia, Vogue Japan and Vogue Terkey. The supermodel also covered various asian editions of Harper’s Bazaar. A year later in 2015, Campbell was featured in the Spring/Summer 2015 campaigns for Burberry and helped to close the Fall/Winter Zac Posen Show at New York Fashion Week.

In terms of television, Campbell also landed a recurring role that same year, in the Fox drama, Empireーa musical drama which centred around a hip hop music and entertainment company. She plays Camilla Marks, a fashion designer and love interest to character Hakeen Lyon. In October 2015, the model also appeared in a two episode arc in the horror television series, American Horror Story: Hotel; in it, she plays the role of Claudia Banksonーa Vogue fashion editor. Notice how both of her characters in the shows have to do with the fashion industry? How fitting! 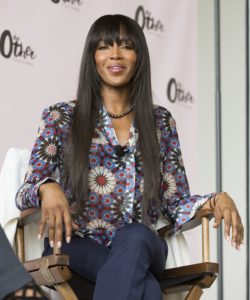 The supermodel’s been busy latelyーthere’s no doubt about that! Just because she hasn’t been walking on the runway as of late doesn’t mean that she’s about to fade into the background! On June 11, she was seen at “The Other Festival”, an all-female festival held at New York City. wearing a chic printed top and a pair of comfy navy cropped trousers. The beaming 46 year old attended the festival for the panel discussions and was joined by the festival’s founder, Dee Poku and editor-in-chief, Marie Claire Anne Fulenwider. Judging from the photos from the event, it sure looks like Campbell had a blast!
Speaking of events, the dark skinned beauty also made headlines earlier this year in June, when she was caught in an embarrassing faux pax on Instagramーshe had accidentally copied and pasted verbatim, the Adidas brand endorsement email onto the caption of the Instagram photo! In the humorous fail, Campbell uploaded a photograph of herself holding up a pair of white, adidas sneakers onto Instagram with the caption,

“Could you put something like: Thanks to my friend @gary.aspen and all at Adidas – loving these Adidas 350 SPZL from Adidas Special range.”

The poor supermodel must have been so embarrassed! Fortunately for her, the error was spotted and quickly fixed (possibly by her team), but of course knowing the internet, it was a given that someone had already taken a screenshot of the original by then!

More recently in early July, it was announced that the supermodel landed a Yahoo! Web Series titled, “I Am Naomi”. While the air date has not yet been set, Yahoo! Style editor-in-chief, Joe Zee, has revealed that the online series will be a cross between both a talk show and a reality show. According to him, fans of the attractive supermodel will be able to see glimpses of behind the scene moments, including her modelling work and acting on “Empire”. But until the debut of the series is announced, it looks like all we can do is to wait for the release date!