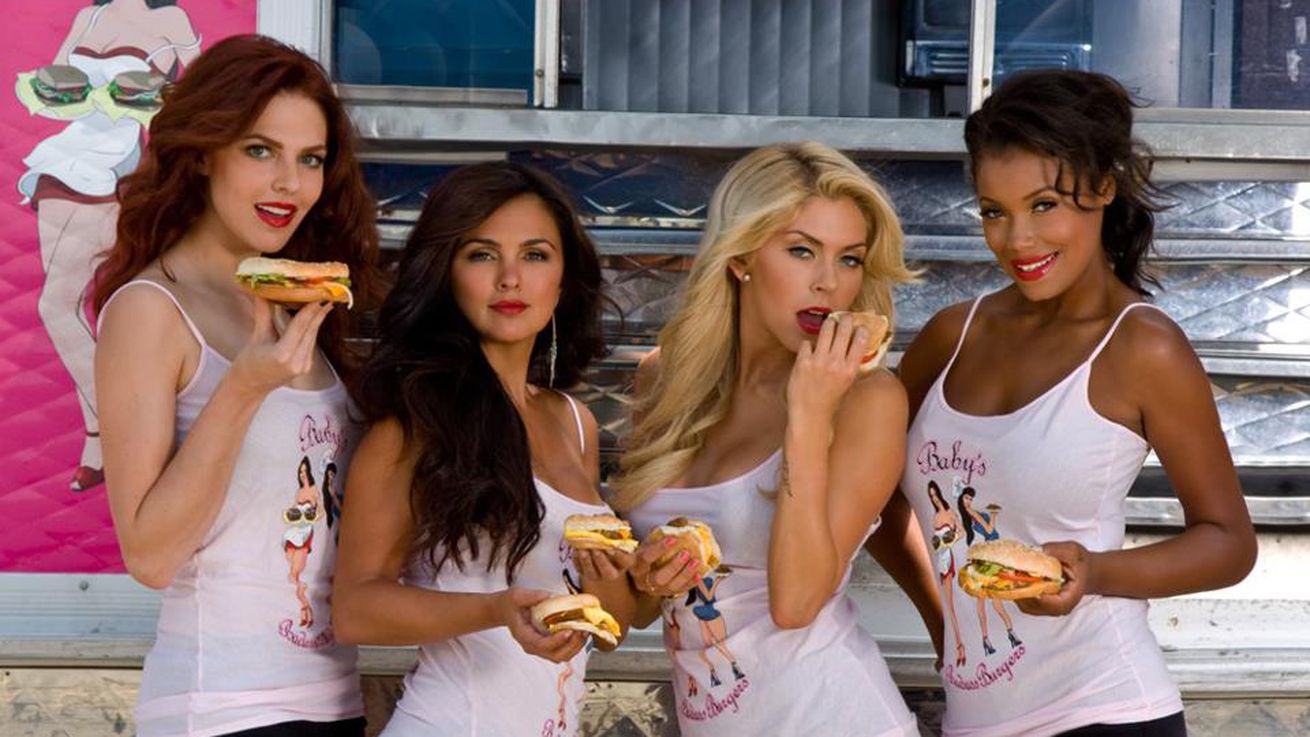 Before coming on Shark Tank, Erica and Lori built up their brand, Baby’s Badass Burgers. They had a successful burger-based food truck in the LA area. Now, the duo has a new idea that they would like to bring to the Sharks. Will the Sharks bite based the success of the food trucks? Let’s take a look. 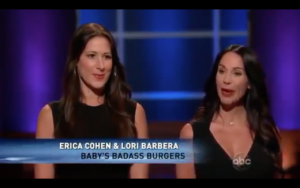 Erica Cohen and Lori Barbara introduced themselves on their audition tape. They were both dressed in pink tank tops in front of a bright pink food truck emblazoned with Baby’s Badass Burgers on the front. They said that they were a mobile food truck concept based out of LA, California. The tape showed customers ordering gigantic tasty looking burgers from their “beautiful burger babes.” Erica stated that her background was in events and marketing, while Lori’s is in the restaurant business. They claimed to make the perfect business partner combination.

Lori claimed that it was not easy to make the perfect cheeseburger. It requires quality ingredients, such as the meat itself, the bun, and condiments. She said that Baby’s Badass Burgers had that covered. Erica stated that they were looking for an investment to take things to the next level, and all they would need to do to achieve that is let the Sharks taste their burgers. The video ended with the pair of them taking a bite from their burgers.

Lori and Erica walked out on stage dressed all in black, with two assistants in tow. There was a cardboard cutout of a truck on the stage, and giant pink display board. Erica and Lori introduced themselves and their company. They asked for a $250,000 investment in exchange for 30% of Baby’s Badass Burgers. Lori told the Sharks that their business concept was a “playful” and moving mobile food truck with gourmet burgers served by attractive female staff. Erica said that the two met after she opened a different restaurant in LA. They launched the company in 2009, and since then they’ve had a bunch of devoted fans. Their delightful business motto is “Come for the burgers, stay for the buns.” They are like a mobile Hooters, it seems.

They brought customized burgers for each of the Sharks. Barbara got a “She’s Smokin’” burger, which featured barbecue sauce. Barbara told the girls that she was a barbecue sauce fan – clearly, they had done their research. Each of the burgers had a themed named, such as “The Other Woman,” or “The Perfect 10.” Daymond examined his burger, and declared “This baby got back!” Kevin said that his was the heaviest burger he’s ever had, and Lori explained that he received the ½ lb Maneater. Robert told them that the burger is great, and the duo thanked him.

Lori told the Sharks that they were looking for an investor so that they could get their food trucks into every major city in the US. Barbara asked how they would spend the $250,000 if they were to receive it. Erica told her that they were planning on opening their first storefront. Robert looked surprised, asking them why they would give up her food trucks that they were already successful with. Erica said that they’ve been very satisfied with the food truck concept, and they felt that it’s time to expand out to the storefront space. Robert asked them what made them think that it would be a good translation, which the storefront would be as successful. Erica said that she had faith in the product, and believed that that alone would carry them through. She stated that they get a line wherever their food truck goes.

Daymond asked them if they were considering making more trucks, Erica stated that they did not want to do the trucks, instead opting to roll them out completely as storefronts. Daymond asked them why they wouldn’t even consider it. He looked very put out. Erica said that the storefront model was always the vision from the beginning. She said that that’s where their core experience is. Kevin asked them if Baby’s Badass Burgers was a profitable business. Lori told him that they were. They’ve done $815,000 in the last three years. Daymond asked if that was total, with an average of $250,000 in a year. Erica said that they were projected for more than that this year.

Robert asked Erica what the profit was on the business. She explained that they take home 15% from that, which is above the 10% industry standard. Daymond asked if that was after they’ve paid everybody, including themselves. They confirmed that that was true. Robert was still stuck on the food trucks vs. storefront. He said that it was a little silly that they had a working concept to present the Sharks with for investment, and they want to deviate from that with something that was untested. Erica insisted that they may not have tested it with Baby’s Badass Burgers, but they did know that they could hack it in the restaurant business since that is where all their experience comes from. Robert looked frustrated that they haven’t opened any of these types of restaurants, even though they’ve opened seven others. Erica explained that they were coming with a concept, and a brand, and experience with other restaurants.

Kevin told them that it would cost $750,000 to open. He said that they wouldn’t know for three months if they were going to make it. They were trying to engage in this risky behavior that they did not currently have with the food truck business model. He let them know that operating a storefront restaurant cost hundreds of thousands of dollars, while the costs of the vehicles are very low in comparison. He wanted to know why they didn’t ask for the money to open more trucks in exchange for a lower equity. Erica insisted that their dream was to open restaurants.

Mark accused them of not knowing the fundamentals of business; He told them that they should be following the money. He told them that the money was right in front of them. He said that it’s great that they have a pipe dream, but he would rather “follow the green.” Daymond said that going full force into the food trucks now doesn’t mean that they won’t open the restaurant later. Kevin stated that he forbid them from ever doing it because it’s an appalling idea. They have a proven concept that is already making money.

Barbara agreed with her colleagues, asking Lori and Erica what whey insisted on the brick and mortar operation. Erica said that she thought there was a cap-out on that trucks since it was a cash business that they would have to be hands on to operate. There was a loud chorus of “there you go!” From the Sharks. The truth was coming out. Erica insisted that she works her ass off every day on the truck. Daymond let her know that she would have to put in 80 hours a week in the restaurant as well. Erica said that she realized that. Kevin insisted that it takes up to 10x more money to open the restaurant than it would be to maintain the food truck concept. Erica admitted that he was right. He continued, saying that she could have 10x the sales with the same amount of money.

Erica stated that she understood the point they were trying to make with the food trucks, but she wanted to open a restaurant. Robert let her know that the sales data she gave for the trucks doesn’t carry over to the restaurant since it is an entirely different business. He went out, saying it was a good pitch on the vehicle, but a bad one on the brick and mortar. They nodded sadly. Barbara was up next, stating that she understood the drive to open the restaurant. She thinks that they want to settle in somewhere, to make a home for the business. But there was still something that disturbed her. She wanted to invest in someone who is love with their business, not trying to get out of it. She went out, saying that she wanted to escape what they were also trying to run from.

Lori stated that they will always have the truck to help the restaurant. It wasn’t going anywhere. Erica said that she sees a bigger plan than just the food trucks. Mark stated that he sees the value in the business, and understood that those trucks were limiting. But there were two options with the restaurants – it either really takes off, or it’s an enormous failure. He said that many people had tried that before, and gone down in flames. He did not believe that $350,000 was enough to start the business and make it successful. He went out, saying that they did not do their research.

The notoriously hard to please Kevin gave them a 9 out of 10 on the burger, but a 1 out of 10 on strategy. He said that they killed an excellent idea. They have a great business, but the Sharks did not appreciate being pushed in a different direction. He went out, but he looked sad about it. It seemed like he believed in the food truck model. Daymond was the last Shark standing. He said that he’s been listening closely for a sense of compromise. He wanted them to be able to say that maybe they were following a losing path too closely, and it was time to be more flexible. He stated that they were too stuck on what they want to, which is a terrible thing in a business partner. He said that he had been ready to give them the money, but it was too late. He was out. After they had walked off stage, the Sharks enjoyed the burgers and conversed about what just happened. Robert said that Erica had a chip on her shoulder about the storefront, and nothing they said would change her mind. In the post interview, Erica insisted that the Sharks underestimated them and their ability to open the restaurant. So let’s see how they did. 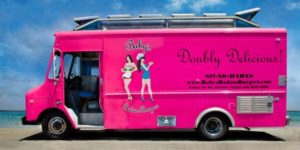 It seems like Baby’s Badass Burger’s never did get it’s store front, but it did start trucks in 4 other states. There is a link for franchising a Baby’s Badass Burgers truck on the business website. They also offer catering to corporate events and even private parties. It seems like they have developed a following among celebrities – there is an area on the website for celebrity photos, and there are a lot of them. It looks like they followed the Sharks advice, and stayed with the food truck model.