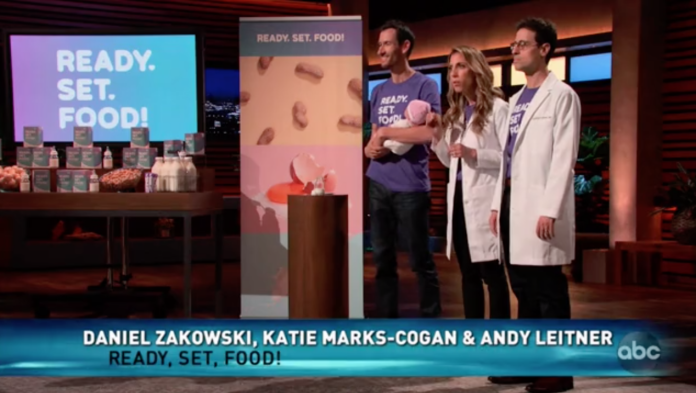 Ready, Set, Food! introduces common allergy foods early to an infant to help adapt their system to prevent future allergies. Ready, Set, Food! was founded in 2018 by Dr. Katie Marks-Cogan, Dr. Andrew Leitner, and CEO Daniel Zakowski from Los Angeles. Their goal was to help introduce allergens early in babies to prevent allergies in children. They believed every child had the right to an allergy-free childhood, so they founded Ready Set Food. 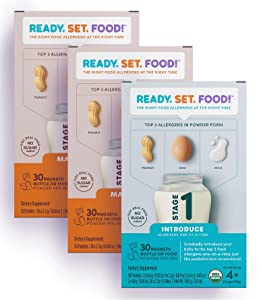 Ready, Set, Food! is a set of powder allergens that is added to the baby’s milk bottle. The product comes in three stages: Stage 1 slowly introduces the baby to each allergen (Peanut, Eggs, Milk) and usually lasts 30 days. Stage 2 uses the three allergens and usually lasts 3-6 months. Stage 3, introduced after the company’s appearance on Shark Tank, is only used when the child can eat solid food. Stage 3’s introduces allergens such as walnut, cashew, almonds, soy, sesame, and wheat. Stage 3 also lasts for 3-6 months. These three stages ensure a child’s safe introduction to the top nine most common allergens, helping prevent allergies in children.

Since Ready, Set, Food! was founded, the company has hired several doctors and allergens to help work and design the products. The company believes it is ready to expand to reach more children. Therefore, the co-founders went on Shark Tank to find a shark to invest in their company and broaden its distribution to reach every parent wanting to protect their child from food allergies.

Katie Marks-Cogan, Andrew Leitner, and Daniel Zakowski went on season 11 of Shark Tank seeking $350,000 for a 7% stake in their company. Katie Cogan stated that children aren’t born with allergies but develop them as they grow up. That is why it is essential to introduce allergens early in a child’s life to prevent food allergies in the future. The founders then pitched their company, explaining why it is necessary to introduce allergens to children at an early age and how their product helps take that hassle off parents. 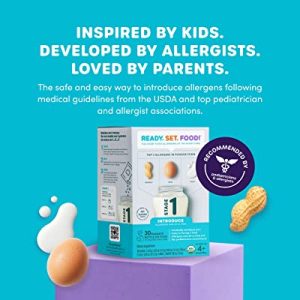 Ready, Set, Food! chose peanuts, eggs, and milk as the three allergens in their products because they make up 80% of allergies in children. These three allergens also help the child’s quality of life and ability to enjoy foods such as pizza, cookies, pies, and cakes. The co-founders claimed their product is safe for all children.

In its first year, Ready, Set, Food! made $250,000 in sales, and the company expects to end the year at $400,000. The company sells its products on its website and Amazon, with over 300 pediatricians recommending Ready, Set, Food! in their offices. The average consumer uses the product for 135 days, averaging $150 per customer. Ready, Set, Food! also has a patent pending for allergen introduction through a bottle with easy-to-understand directions. The company didn’t have any real competitors, with the only close idea being apple sauce with a few allergens introduced.

The inspiration for the product came when Leitner’s three-year-old son, Gabe, had food allergies. It was difficult for Leitner to get a call at work saying that his son had a severe food reaction. He didn’t want anyone to go through the same experience. So he teamed up with the other co-founders to start Ready, Set, Food! Cogan was already introducing her child to allergens but found it difficult to maintain a healthy allergen ratio on her own, so she, along with the other co-founders, came up with the idea.

Barbara Corcoran believed the packaging didn’t contain enough information about what the product does. She thought it would be difficult to inform people of its benefits, so she was out. 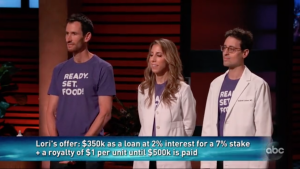 Rohan Oza stated that the company is still too new and would need a lot of branding and awareness to be successful, so he was out.

Mark Cuban offered $350,000 for 12% of the company with a contingency: for each subscription a customer buys, Ready, Set, Food! donates a free subscription to low-income parents.

Mark agreed to change the offer to 10%, and they had a deal.

Ready, Set, Food! left the Shark Tank with a generous deal from Mark Cuban. They believed they were one step closer to stopping food allergies from developing in children. 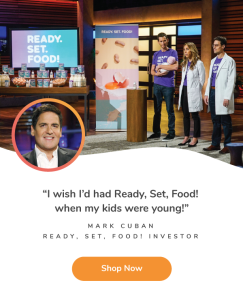 After their appearance on Shark Tank, Ready, Set, Food! saw a spike in subscriptions and purchases. Their deal with Mark Cuban successfully closed. Daniel Zakowski stated that Mark was a very passionate business partner. Mark appeared on several media outlets explaining the dangers of food allergies and children; he was passionate about his mission to prevent allergies in children since his daughter had a severe peanut allergy. Ready, Set, Food! continued to work with pediatricians to inform families of the benefits of the products and provide them with information about the effects it has on children to prevent food allergies.

In 2021, the company launched stage 3 of its allergen-introduction product. Stage 3 introduced six more allergens and was intended for children who could eat solid foods. Ready, Set, Food! also received the J&J Innovation’s Next in Naturals QuickFire Challenge: Children’s Wellness award, which consisted of $50,000 funding and a few more perks. In June, Mark Cuban led an investment round raising $3 million for Ready, Set, Food! In November 2021, the company reported $3 million in annual revenue.

2022 has been going smoothly for Ready, Set, Food! as they grow their network of pediatricians and broaden their distributions. Mark has been actively helping spread awareness of early allergen introduction to parents and families across the country. The company also launched allergen-full oatmeal for children. Ready, Set, Food! has been seeing a steady growth in annual revenue and is expected to continue to grow in the future. In 2022, Ready, Set, Food! reported $3.5 in annual revenue. The company is still passionate about its mission to prevent food allergies in children. For more information and updates about the company, visit their website here.