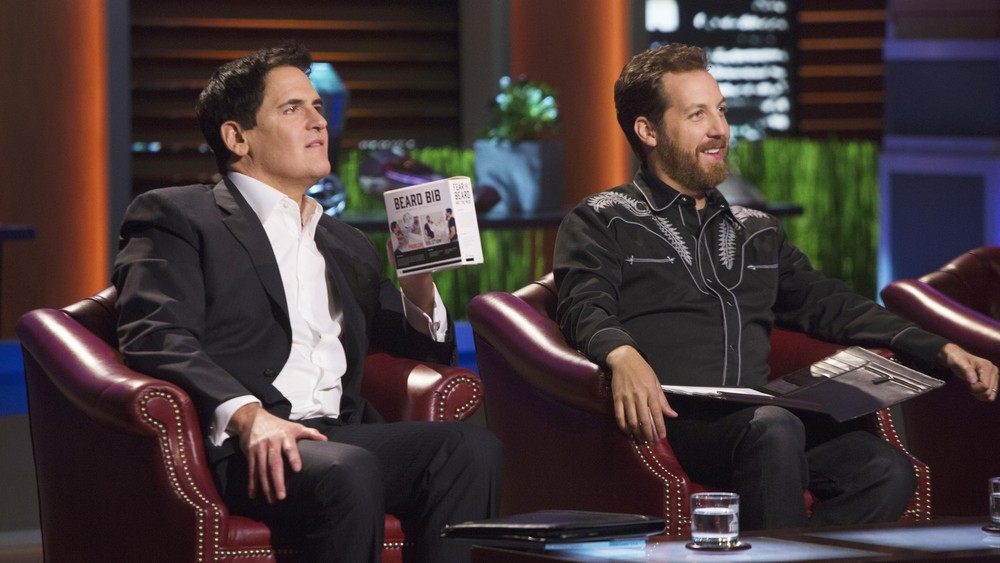 Nicholas Galekovic has been growing facial hair for awhile now. Ever since he grew his first beard as a teenager, he has been getting called out by the women in his life for leaving gross facial hair all over the sink. To make his wife happy, he developed the beard bib that would launch his company, Beard King. How would this interesting idea fare on the Shark Tank? Let’s take a look. 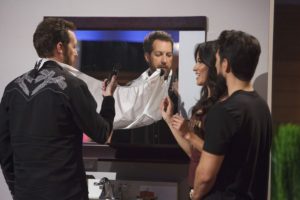 The announcement for the next segment told the audience that the next product would ensure domestic bliss. A bearded man in a Beard King t-shirt walked out onto the stage with a dark hair woman by his side. The man introduced himself as King Nicolas Galekovic, “protector of the face follicles.” The woman went next, saying that she was Alessia Galekovic, Queen of the Kingdom in heavily accented English. Together, they started Beard King. They were searching $100,000 in exchange for 20% quite in their “kingdom.”

Nicolas claimed that facial hair, ranging fro beards to mustaches, to side burns, has been around as long as their have been men. He said that all men with facial hair have a common problem – the mess associated with grooming. Alessia addressed them women, telling them to imagine gross facial hair coating the bathroom sink, counter, and even toothbrush, which would eventually lead to the sink clogging. She said the she as a woman is the person responsible for cleaning up the mess. Chris, who had a nicely trimmed beard, said that Alessia sounded exactly like his wife. She thanked him, strangely enough.

Nicolas addressed Mr. Wonderful as Lord O’Leary, and said that he knew that he once related to the madness with his former “all-mighty” beard. The on-stage screen flashed a picture of a younger O’learly sporting the aforementioned facial hair. This had the other Sharks in hysterics. Kevin stated that the picture was of a beautiful looking guy. Alessia. Said that with a great beard comes great responsibility, quoting Spider-Man. With that, she presenting what Beard King was on the Tank to pitch – a beard bib that allows for easy clean-up and disposal.

A video explained and showed how the beard bib functioned. It showed Nicolas pulling the prudent out of the pouch, attaching the neck strap, and attaching the suction cups to the mirror. Nicolas began shaving, and the beard I’d caught all of the hair. When he was finished, he detached the suction cups, and carried the bib to the trash can, keeping all of the hair inside until he was ready to dump it. The Sharks all seemed extremely assumed. Robert asked them if they were serious, and Allessa confirmed that they were.

Chris then asked them if they were married, and Alessia confirmed it. He seemed to like that it wasn’t a hypothetical, but an actual problem that the two had shared, and come up with a solution for it together. Alessia said that she was a neat freak, and Nicholas would always make a mess whenever he would shave. The pair told the Sharks that the beard bib was a compromise to that problem. Kevin asked Nick if Beard King had sold any units. Nicholas confirmed that they had sold $140,000 worth in eight months. Robert seemed impressed, and he scribbled something in his notepad. Mark even clapped for them.

Nicolas elaborated on the sales figures, stating that they had earning $80,000 of that in just the last month alone. Robert looked shocked, asking them how they had achieved that. Nick told him that the instructional video he’d shown them went viral on social media with over 20 million views. Mark told them that the video was hysterical. Nick said that his passion was brand development. And told the Sharks that he did all of the related work for Beard King. He said that the business is growing by word of mouth. Robert wanted to know what each unit cost to make, and what the profit was. Nick told him that he was able to get the cost down to $7 per peiece last month, and the retail price is $29. Kevin complimented them on their margins, but Alessia said that they could improve with the help of the Sharks. Nick said that he could get the margins up to 85%.

Mark asked about the packaging, and Alessia passed out a sample, saying that she loved it. Robert was the first to get the professional looking box. Kevin asked if they had a utility patent, and Nick said they did for an apparatus around a person’s neck that was also attached to a mirror. Robert told the pair that he first thought the product was a joke, but their reach and their sales proved him wrong. Kevin looked over the packaging, and asked them why they needed the money. Nick said that they needed to scale up manufacturing. They did not have the facilities to keep up with the demand for the product.

Mark seemed confused. He told them that they sold over a hundred thousand dollars worth of product with huge margins. Nick stated that Beard King’s margins were only 40% the first 7 months. They only got better in the last month. Robert confirmed that they required the cash for scaling manufacturing. Robert asked them for their sales projection for the next year. Nick said that they were expecting $400,000, which was a conservative estamate based on their current growth rate. Robert asked them how they planned on taking their current sales figures to the $400,000 mark. Before they could answer, Lori asked them if they had ever approached a big box store with their product. Nick said that they’ve been approached by many holes ailing distributors, but because they were having an issue meeting demand, they wanted to focus on the online distribution channel. They needed the Sharks assistance in doing both.

Kevin stated that he doesn’t know if it’s a good plan. Wholesaling cuts your margins in half, and forces you to produce a lot of inventory. Robert said that he has an issue with the company. He said they are already doing well with good margins, which would allow the pair to bootstrap their way to more production. He wand’t seeing why they wanted the money for inventory because they could manage it on their own. Something was not adding up. He didn’t see how his money would help accelerate the business. He went out. The pair thanked him.

Mark was up next. He told Nick and Alessia that the first thing he does when he looks at a company is figure out what they are best at, and how far it can take them. Mark stated that what they demonstrated was their ability to create viral content. Mark wanted to see that their initial success was repeatable.  Mark said that if the beard bib was just one product among many related, but different one in the Beard King line up, that would be one thing. If they had showed him that Nick was the king of creating viral videos, Mark would be all in. But they had a narrow focus at the moment, and he was out.

Kevin told them that the beard bib was an interesting idea that did not make it all the way to being a business. Kevin told them that the rest of the stuff they carried could be bought at many other different places. Many other companies were selling the exact same thing. Alessia asked Kevin if he had ever seen the beard bib before. He didn’t answer her, he just said that he gets it a big thing, but it’s just a single product. He wanted to know how he would be getting his money back.

Alessia told him “by investing in us,” and Mark Cuban burst out laughing. The rest of the Sharks joined him. Kevin told them his beard days are over, and thanked them for sharing the photo. He went out. Chris said that individual products are not his wheelhouse, even though he really liked the idea of this product in particular. He went out. “Queen Lori” was the last man standing. Alessia told her that she would like to share her crown with Lori. Lori told her that she found it interesting that even though the men were the ones doing the shaving, the women were left with the hair in the sink. Alessia confirmed that it’s a common problem. Lori asked her if women would buy the product to keep themselves happy, and Alessia said that 60% of the customer base is female. Any woman with a man in her life, whether it be a son, husband or boyfriend would buy to keep herself sane. Lori said that she could see it making women happy, but was not sure how well it would do overall. NIck asked her to make an offer before she went out, to the great amusement of the Sharks. Nick asked what she thought would make providing the money worth it on the equity side. Everyone started chanting her name. Lori was still considering when it went to a commercial break.

Alessia and Nick attempted to sway her by telling her that they’ve taken out the risk by proving the market. Beard Kings sales are growing exponentially. Lori did not agree that there was no risk. She asked for 51% equity in the company. She said that she knew that it was a steep offer, but she was on her way out. Alessia asked if she saw it doing well on QVC. Lori told her that the video was cute, she get’s it. Nick said that they were not willing to give up the company, but they would be willing to negotiate. Alessia offered 45%, stating that she had to give them credit for their marketing skills. They said that they would throw in the shirt, as well as a surprise! The other Sharks perked up, and asked what it was becasue they might want back in. Nick went behind their display, and pulled out a red robe and a crown. The Sharks cracked up. Lori took a moment, but said that the deal was done. Alessia crowned her, and the pair left. They said that it was a little higher than they wanted to go, but they called her the perfect shark.

Beard King Now in 2018 – The After Shark Tank Update 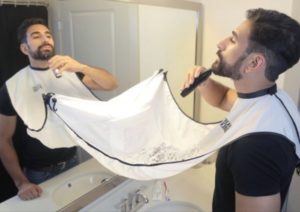 You can now purchase the beard bib in either black or white on the Beard King web site, along with an entire King Kit of beard oils, brushes and the beard bib. There is also a weird Beard Queen section of the site for female beard fans, which sells t shirts with the Beard King logo on them, and racy oral sex themed thongs. It seems like they should’ve just kept in their wheelhouse. They also sell the beard bib at a few retail store, both in the US, and internationally. Beard King’s social media sites are active, and moderately popular.