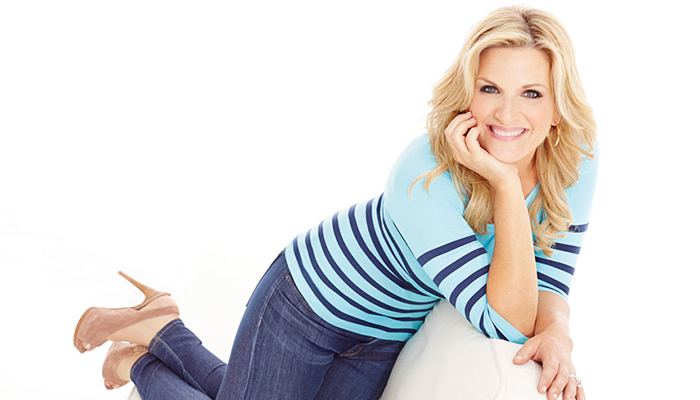 Trisha Yearwood is an award-winning country singer best known for having rose to prominence with her debut single, She’s in Love with the Boy in 1999. Having entered the show biz with her self-entitled album, Trisha Yearwood at the age of twenty eight, the blonde has been considered to be one of the most successful country music artists of the 90’s. Some of her early records include Hearts in Armor (1992), The Song Remembers When (1993), The Sweetest Gift (1994), Thinkin’ About You (1995), amongst several others. Since then, Yearwood has released several studio albums and have sold over 15 million records across the globe; according to the RIAA, she is also listed as one of the best-selling music artists of all time in the United States.. Known for her powerful and emotional voice, she is best known for her signature song How Do I Love from the soundtrack of the film, Con Air from 1997.

For her contributions to music, Yearwood has garnered numerous awards over the years including three Country Music Association Awards, three Grammy Awards, two Academy of Country Music Awards, a Pollstar Industry Award as well as an American Music Award. Often described by critics to be “confident” and “strong,” Yearwood has also received a number of nominations including three for the Grammy Award during the 2000’s. Having achieved eight chart topping singles and twenty top 10 hits throughout her career, she has also since been inducted into the Georgia Music Hall of Fame.

Aside from being an accomplished country singer, Yearwood has also made a handful of appearances on television. Some of her early projects behind the camera include, The Thing Called Love (1993), Dr. Quinn, Medicine Woman (1994), Kenny Rogers: Keep Christmas with You (1995) and JAG (1997)ーthe last of which was Yearwood’s first recurring role in a series. In 2012, the music artist also became the host of her very own culinary reality series on The Food Network called Trisha’s Southern Kitchen; praised for it’s content, the show later went on to earn the blonde an Emmy Award for “Best Culinary Program.” An avid cook, Yearwood has authored three successful cookbooks, two of which have since become a New York Times Best-Seller.

But what has the celebrated singer been up to as of late? What happened to Trisha Yearwood? Where is she now in 2018? 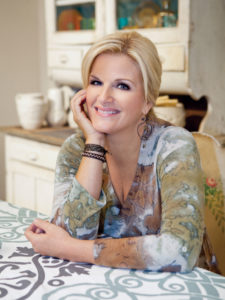 Born on September 19, 1964 in Monticello, Georgia, Patricia Lynn Yearwood is the daughter of Jack Howard Yearwood, a banker and Gwendolyn, an elementary school teacher; she has an older sister named Beth, whom she was fairly close to growing up. Raised in a tight-knit farming community, Yearwood grew up around country music as a child; she would later cite American singer Hank Williams to be one of her musical influences. Having shown a desire to perform ever since a young age, she often sang in various choir groups and talent shows during her time in elementary school. As a teen, Yearwood was an A’s student and was known to have excelled at her classes. Good with numbers, she eventually found herself gravitating towards becoming an accountant after graduation.

After graduating from high school, Yearwood enrolled at Young Harris College, where she later graduated from with an associate degree in business. Shortly awards, she went to the University of Georgia to continue her studies, however would ultimately transfer to Belmont University after growing uncomfortable with campus life after a year. Majoring in the music business program, Yearwood later graduated from the institution with a Bachelor’s Degree in business administration at the age of twenty three. Having previously interned at MTM Records as a student, she soon began working for the company as a full time employee following her graduation.

Wanting to refocus her career, Yearwood eventually recorded a few demo tapes with the help of her company’s resources and helped to provide the background vocals for some new artistsーit would be then that she’d meet country-pop singer, Garth Brooks, one of the new music artists at the time. Soon becoming friends, Brooks promised the blonde that he would try to help her land a recording deal with his connections. Carrying on with his promise, Brooks introduced her to his music producer at the time, Allen Reynolds who in turn, later brought her to meet record producer, Garth Fundis; the two would later create a new demo tape together after their initial meeting. After getting her foot in the door, it wasn’t long before the aspiring artist got her first recording contract with MCA Records. 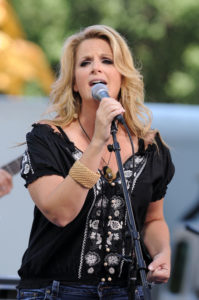 Yearwood released her debut album self-titled, Trisha Yearwood in 1991. Consisting of ten tracks, the album was met with positive reviews and later peaked at the number sixth spot on the RPM Country Albums chart in Canada and at the number two spot on the Billboard Top Country Albums Chart in the United States. A big hit, the record soon spawned three successful follow-up singles including, That’s What I Like About You, The Woman Before Me and Like We Never Had a Broken Heartーall of which would rank amongst the top ten. Having achieved over 2,000,000 sales since its release, Trisha Yearwood was certified double platinum by the RIAA in 1991. Described to be “a classy debut” by critics, the record Yearwood a “Top New Female Vocalist” Academy of Country Music award that year and also helped to boost her popularity as a rising artist.

The next year, Yearwood released her second studio album which was titled, Hearts in Armour. Considered by many to be one of her best records to date, the album featured a variety of styles including both fast tempo material and slow ballads. Composed of ten songs (fifteen in the special edition), Hearts in Armour followed the success of her previous album and had peaked at number twelve on the Billboard Top Country Albums Chart and number seven on the RPM Country Albums Chart in Canada. Many of the recordings also featured a number of guest vocalists including fellow artists, Emmylou Harris, Raul Malo and Don Henley. Praised for its ballads, the album would later be certified platinum for having sold over 500,000 copies throughout the country.

Gaining popularity, the country singer released her third studio album in 1993 entitled, The Song Remembers When. Recorded very similarly to her previous record, the album featured eleven tracks, some of which were also collaborations with other artists. Officially released on October 26, 1993, The Song Remembers When received much positive recognition at the time, peaking at number six on the Top Country Albums Chart and at number forty on the Billboards 200 Chart in the United States. The album’s lead single of the same name, would also go on to becoming a major hit, having reached number two on the Hot Country Singles & Tracks Chart.

Throughout the rest of the mid 90’s, Yearwood would release two more studio albumsーThinkin’ About You in February 1995 and Everybody Knows in August 1996, with the former having been more successful than the latter. That same year, her duet with American hip-hop artist, Aaron Neville would also earn the singer her first Grammy Award for the category of “Best Country Collaboration with Vocals.” After a much needed two year break, Yearbook released her seventh album called Where Your Road Leads in July 1998ーit would also be the first to be produced by Tony Brown. 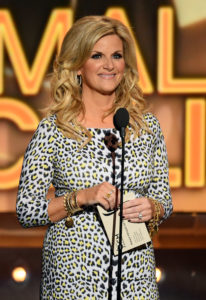 After going through a divorce with her second husband, the blonde released her seventh studio album entitled, Real Live Woman in March 2000. Inspired by the separation which she had just gone through at the time, the album contained many of her emotional conflicts, reflected in the form of song lyrics. Comprised of twelve tracks, Real Live Woman also featured a number of covers, one of which included a rendition of Linda Ronstadt’s, Try Me Again. Peaking at the number four spot on the U.S. Billboard Top Country Albums Chart and number twenty seven on the Billboard 200 Chart, the album went on to sell more than 500,000 units in the United States, effectively reaching platinum certification status.

Carrying on with her singing career, Yearwood released her eighth studio album, Inside Out in June 2001. In contrast to her previous works, the record consisted of many love songsーone of which was a collaboration with singer, Don Henley. Rated four out of five stars by the Rolling Stone, Inside Out topped the U.S. Top Country Albums Chart that year and reached number twenty nine on the Billboard 200 Chart. It later led to the release of three follow-up singles, I Would’ve Loved You Anyway, Inside Out (With Don Henley) and I Don’t Paint Myself Into Corners.

Following a four year break to spend time with Garth Brooks, who she’d began to date during the early 2000’s, Yearwood returned to the music scene with her ninth studio album, Jasper County in 2005 and her tenth studio album, Heaven, Heartache and the Power of Love in 2007. 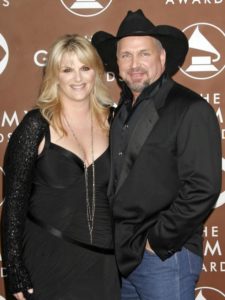 First and foremost, she has been busy with her culinary reality series Trisha’s Southern Kitchen. First premiered on the Food Network channel in April 2012, the show features Yearwood herself as the host as she shares with viewers through the episodes various family traditions and recipes. A fan favourite, the series has continued for several years and is currently on the eighth seasonーwhich just started this July. If you’re planning on watching the show, you can catch Trisha’s Southern Kitchen on the Food Network every Saturday at 10:30am.

On the music front, Yearwood has spent the last few months on tour with her husband, Garth Brooks for his World Tour which began in 2014. Kick-offed two years ago in Rosemont, the tour features Yearwood as she accompanies Brooks for a duet in the show prior to performing a few of her own big hits from the past. Scheduled for a total of 240 shows, The Garth Brooks World Tour with Trisha Yearwood, as its called, will continue to be make its way across North America for the next two monthsーuntil its last show in Charleston on October 22, 2016.

Speaking of the married couple, the two have also recently volunteered for the Habitat for Humanity Jimmy and Rosalynn Carter World Projectーin which they helped to construct new homes for nineteen less fortunate families in Memphis. Strapping on their tool belts, Yearwood and Brooks joined many other volunteers in the effort and were even able to return to their ongoing world tour after the event.