Stepping into the Shark Tank is Chris Ruder from Chicago, Illinois, and he is seeking an investment of $500,000 in exchange for 10% in his company, Spikeball. Spikeball is poised to be the next great American sport, Chris explains; like all great sports, Spikeball is easy to learn, but really difficult to master. It can be a casual, fun backyard game, or it can be a hardcore competition. The other great thing is Spikeball is ultra portable, so all you need is the ball, the net, and the stands, so you can take it anywhere.

With Chris are numerous Spikeball players forming two teams; the first is Chico Spikeball. Joe explains, Chico Spikeball is the #1 ranked team and has held their title for over 12 months and have been dominating. Chico is going to play Tiro United, and these two will play an exhibition match. Joe explains further, they will bounce the ball off the net, and Tiro has up to three hits between each other before they have to spike the ball on the net. They want to spike the ball in such a direction that Chico cannot get the ball back on the net within three hits, and the first team to 21 wins. Once the ball is in play, there are no sides; the players can run in any direction they want.

The team then steps out and demonstrates for the Sharks, even diving in the direction of the entrance of the Shark Tank so as not to damage the set or the Sharks themselves. Kevin is the first to ask, who invented Spikeball? Chris is actually the person to bring Spikeball back to life; back in 1989, one of Chris’s good friends bought the Spikeball at a toy store and about 10 years ago, a lightbulb went off. They did their homework and found out that Spikeball had been off the market for 15 or 20 years, and Chris and his team reclaimed the trademark since there has never been a patent. So far, they have never had someone contest the rights to the trademark or patent. Mark is completely amused by the situation, as something like this has never occured on the Shark Tank before. 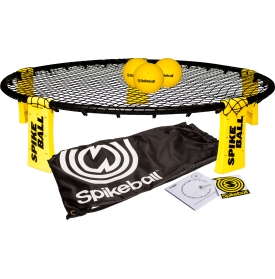 Mark asks how big Spikeball could possibly become, and Chris explains that they have an organization in place for Spikeball which will organize about 100 tournaments within the next year. It’s a “freemium” model, and memberships are also sold – a “baller” membership is available on USA Spikeball. Guest Shark and founder of the GoPro Nick Offerman is on this episode of Shark Tank, and he asks about the target demographic of Spikeball – who is the product aimed at? Spikeball would be aimed at men from ages 15 to 24, Chris explains. That seems to be the sweet spot.

Each Spikeball costs $59.99 and shipping. Kevin asks if he could go into a toy store and buy the Spikeball, and Chris explains that they are aiming more towards sporting good and hobbyist outdoors stores, but yes, the product so far is carried in toy stores. They have been around for 6 years, and the first 5 years were entirely e-commerce. Mark asks how many units Spikeball has sold in a year, and so far, Chris estimates that just under 29,000 units have been sold. Each Spikeball unit costs over $14 to make, which means that in a year, Spikeball has grossed $1.4 million dollars. The income projection for this next year would be between $3.2 and $3.5 million dollars.

Mark mentions that Chris is killing the sales since it’s all about the small margin, and asks about the profit end of things. In the last year, profit was only about $180,000, and Chris explains that the retail is growing like crazy – the e-commerce is strong, so the retail is eating into the profit of things at the promise of long-term security and growth. Mark asks about Chris’s salary, which Chris reveals to be $175,000, and Mark mentions that that is why the profit is dropping off, but ultimately, Chris is the entrepreneur, so he has earned the payday. 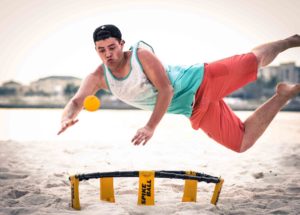 Lori wants to know if Chris could get the cost down from $14, and he has a goal to get the goal down to $10. As Chris explains, Mark motions for the Spikeball to be thrown so he can examine it; with the investment from the Shark Tank, Chris explains, this money will be working capital. This money will be put towards the production of units including materials and labor, which will scale up the amount of units produced and allow for Spikeball to fulfill really big orders. They have purchase orders from Dick’s Sporting Goods for up to 10,000, and have many units to fill.

Nick Woodman asks if there has been any testing about the sales of the Spikeball, and Chris explains that they had an initial test of 100 stores. They started the major test 2 months ago, and the Spikeball moved from 100 to 250 stores in 2 months in just a simple brown box. Kevin then mentions that he feels the word-of-mouth is spreading about the business, and is struggling with how to label the product – is it a toy, or a sport? Nick Woodman says that Spikeball should only be sold in sporting stores and now in toy stores, as Chris has to protect the Spikeball brand and would undermine the image by selling it to children. As soon as it shows up in the toy store, it becomes a problem – but, upon Kevin’s questioning, Chris would indeed sell it at Wal-Mart.
Nick Woodman explains that, as the founder of the GoPro, he would NOT shy away from the opportunity to bring the product to Wal-Mart. Kevin then says that, should Chris and the Spikeball company achieve their goals, they will earn $320,000 to $350,000 profit pre-taxes. Kevin is being asked to pay 20 times the cash flow for a ball and net; Chris mentions that simplifying it down to “ball and net” is like calling your baby ugly, which elicits a huge reaction from Mark who bursts out laughing. Kevin estimates that the business is worth 7 times the cash flow, for a value of $2.5 million dollars. Would Chris do a deal for 7 times the cash flow? Kevin intends to sit back and see how enthusiastic the other Sharks are.
Lori steps up next, saying that she loves the idea, but like Kevin, she cannot see her way to the valuation that Chris stepped into the Shark Tank with. Lori is the first Shark out. Nick Woodman speaks next, saying that Chris has room to bring his margins down and reduce his price per unit, but Spikeball is just not something that he is passionate about. Nick Woodman is also out of the deal. 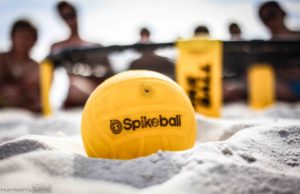 Mark says that he has to be brutally honest; when Chris walked in, he thought Spikeball was going to be stupid. If he was just explained the idea of Spikeball, he thought it would be stupid and dumb, but he was won over – but ultimately, he finds the idea insane that Chris is killing it. But, he cannot find his way to a $5 million valuation, much like the other Sharks. He is out of the deal, not even giving Chris a chance to redeem his valuation.

Daymond and Kevin are the two remaining Sharks in the deal. Kevin explains that as the entrepreneur, Chris has made some decisions that have changed the fate of the company. But as an investor, he is interested; Kevin makes the offer of $500,000 in the form of a loan since the business can now support some debt, in exchange for 10% equity. The terms on the debt are a 9% interest rate, and Kevin intends to work Chris hard in order for Spikeball to achieve success – there is a bit of an interesting viral undertone to Spikeball, which Kevin finds interesting and wants to ride out the wave on.

Chris turns to Daymond for any input, as Daymond has been quiet the whole time – Daymond has the same worries as the other Sharks, and the challenges are making the goods and providing them to the store. Daymond offers the investment of $500,000 in exchange for the rights to licensing and handling shipping, and this would be in total exchange for 25% of the entire company. Chris would still handle the sports division and online store, since the online store creates the sports division and strengthens it.

Chris returns with $500,000 in exchange for 15% at Daymond, citing that he is riding down a snowball since he has an army of amplifiers, but Daymond has the same thing which will cost him a lone $200,000 that Chris will not incur. However, Daymond will go down to 22%, but Chris wants to settle the deal at 20%.

Daymond thinks for a moment before closing the deal at 20% with Spikeball, giving Chris a $500,000 investment.

Spikeball Now in 2018- The After Shark Tank Update

Spikeball is still doing quite hot and there is a ton of success to be found. Of course, on Spikeball’s website, they do advertise “As Seen on Shark Tank;” following the airing of the Shark Tank segment, Spikeball received a huge boost in sales and interest and now have an avid social media presence on Twitter, Facebook and Instagram. The league has grown as well, with games being played in all 50 states and some games in Mexico and Canada. Spikeball is still available for the price of $59.99, but is strongly rated with a huge 4.5 rating across 808 individual customer reviews on Amazon’s internet storefront.