Jessi Jennay, from Lumi, has come to the Shark Tank to seek an investment of $250,000 in exchange for 5% equity in her company. Jessi starts with a simple story; have you ever had an idea for a t-shirt, or ever wanted to print a logo on something other than paper? With the power of the sun, you can print beautiful, permanent imagery on any natural material. Jessi says she will demonstrate exactly why Lumi is unlike anything else the Sharks have ever seen; simply snap the image on your phone camera, upload it to the free Lumi add, press negative, and it can turn your image into a negative. You can save and print the image at home, or order from Lumi where they will print and ship it to you.

At this point, if Lumi ships it to you, you can choose something to print on – perhaps a T-shirt or a tote bag. Take the sunlight activated eco-dye, snap the packet, and simply spread it on; then take the negative, secure it in place, and after ten minutes in the sun, the negative will be turned into a design. Fortunately, Jessi has brought with her a sample, and she peels off the negative film, revealing a nice, red-dyed tote bag. Take the tote bag, wash it, and you are done. At Lumi, the focus is shifting from the darkroom to the focus on the sun.

Kevin explains, he has lots and lots of services that he has performed the same service with, although these businesses were more “Tchotchke”-aligned (tchotchke is a term for a small item of no real significance), but Jessi explains, Lumi is actually DIY. People have an urge to create things at home, and to Jessi’s knowledge, she is the first DIY service of her kind; there are no competitors that she can name to the Sharks. She passes out the sample tote bag she made to Robert, while Lori clarifies about the patent – Jessi and Lumi are the only ones who could do this. Jessi actually owns a trade secret; a “fellow” in the 1950s came very close to the goal that she was seeking, and it took her two years in order to track the guy down.

The business the guy owned was defunct, and eventually, Jessi convinced him to relinquish any old inventory he had with the promise that she could take it over. Jessi bought the rights outright, paying $50,000 for the right to the method of production. The Sharks want to know where this came from, and Jessi explains she found an angel investor who invested $180,000 at 10.5%, which blows away all the Sharks. Kevin asks for sales this year, and Jessi explains that in the past 12 months, she reached $1 million in sales; they are net-positive $40,000 (meaning that the $40,000 was profit), but that will be reinvested into the company.

Kevin then asks about the cost of goods, and Jessi explains when they sell direct on e commerce, their margins are about 91% blended (meaning, an average of 91% of the sale is pure profit), but when they drop down to selling the equipment to wholesalers for the Lumi technique, profit margins fall down to 78%. Robert and Lori are still unclear on what exactly Jessi is selling and ask for more samples, which she then passes out and explains what goods she is giving out. She gives out a shadow printing kit and a sunfold printing kit; Lumi is selling both the kits and the dye to produce your own Lumi items. 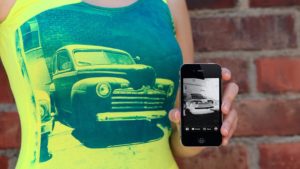 Robert still asks for clarification, asking how he, the customer, could pick up a Lumi product. Lumi products are available online, at Michael’s crafts stores and Jo-Ann fabrics. Each Photo Printing Kit costs $39.99, and is made for about $6.50. Each kit makes about 4 shirts or items, and if you desire more, you can simply repurchase the dyes and make as many as you want. Robert asks about revenue for next year, which Jessi says will come out to $2.5 million, and even then, that is being conservative. This gigantic amount of growth has been based on Jessi’s doubling of the sales for every year for the past 5 years. Robert is curious how big Jessi could scale her operation to, or how many people could make their own t-shirt at home. Jessi explains that she sees a lot of potential in the market, which is “absolutely astronomically massive,” which prompts Mark to repeat the loaded phrase and smile.

Jessi refocuses; out of the $28 billion dollar niche for crafting and DIY, about 8% of that involves some type of stamping, marking, or an impression. Kevin “dumbs it down” and explains; while Jessi is enthusiastic and hyperactive, it is time to get real. Since Lumi is a million dollar business, when optimizing it, she could make $150,000 pre-tax, meaning $100,000 after tax. Jessi is asking for a $5 million evaluation, which is 50 times the free cash flow, which presents an immediate problem for Kevin. However, Jessi wants to explain how she came to the evaluation, but Mark interrupts and explains that he is not in the DIY business, so he is the first Shark to exit the deal. Mark would rather spend his time writing code than building a birdhouse, evidently.

Barb speaks next, mentioning that Jessi’s business is making a lot of money and that she loves the photo-printing kit, since you understand immediately what it is. However, Barb is a bit confused on the specifications of the product, and is a bit concerned about the future, so she exits the deal next as well.

Lori, however, will extend an offer to Jessi; she likes her and Lumi, but she does not like the valuation which is a “very rich ask.” However, Kevin interrupts, and before Lori wants to make an offer, he would like to make an offer in order to help Lori, where she will decide if she wants to cooperate or compete with Kevin. The show dramatically cuts away before Kevin can make an offer, but upon the return, Kevin offers $250,000, explaining that he valued the company with the assumption that her million dollars in sales should make about $100,000 after tax (profit,) so Kevin would pay five times that multiple. This is a valuation of $500,000 in the company, so at Kevin’s rate, he would become a partner.

But, if Jessi does not like that valuation, Kevin extends a loan of $250,000 at a 8.5% interest rate for 3 years (36 months), as Jessi will easily be able to pay that back, but Kevin would take 12.5% of the company, which makes this a venture-debt deal. Kevin explains further, saying that the company would be absolutely perfect for taking on the venture debt. However, Jessi feels that Lumi is very creditworthy since they took a $110,000 loan with interest, and paid it back within 4 months. Robert is also interested, asking if she is looking for a loan that converts into equity or if she is looking for straight equity. She is interested in both of those, but Lori mentions that, despite Kevin being rude, there is something interesting about that deal.

Kevin mentions that he is the only Shark who is a photographer, but no other Shark are artists like Kevin and Jessi. Lori then speaks up and says she likes Kevin’s offer and would go half-and-half with him, forming a superteam of two Sharks. However, while she does appreciate the offer, she feels that the company is worth more – she fires back at the loan of $250,000 (with 8.5% interest) in exchange for 2.5% equity, but Kevin wants 2.5% for each Shark for a total of 5% equity. While she feels the deal is fair, she ultimately does not commit, at which point Mark asks if she is a fan of the show (she is), then explains that nobody can ever get a deal by not giving some headroom.

Jessi is not in a mood to not give, and she appears to becoming frustrated and aggravating with the politicking of the Shark Tank, but Robert makes an offer of $250,000 in exchange for 15%, which Jessi denies – from 2015 going into 2016, she plans to expand the business. However, Lori points out that in order for Jessi to be a full partner, one of the investing Sharks would have to be a partner, too.

Jessi then fires back $250,000 as an equity investment for 5% equity, but another $100,000 as a revolving (continuous) line of credit for an additional 2% equity in the company. Robert is out of the deal, since it is so bad and continues to devolve. Kevin points out that in the Shark Tank, the ultimate goal is to walk out with a Shark partner, and two Sharks are better than one. So, Kevin and Lori will split the $250,000 loan at 8.5% interest, which was the original deal, plus 5% equity in the company.

However, Jessi feels that she can get a loan elsewhere for the same amount, but Kevin does not feel as though the bank would give her that offer, but Jessi would not go to a bank. However, Jessi would not give up 5% of her company for a company. Lori goes alone on the deal, offering $250,000 as a loan at 8.5% interest, plus 7% equity of the company, but Jessi denies the trade of a loan for equity. Lumi does not find an investment from the Shark Tank.

Lumi Now in 2018- The After Shark Tank Update

Since the appearance on Shark Tank, Lumi appears to have focused itself on what it really is. Now, Lumi is known as “Inkodye,” and this caused quite a massive amount of confusion in trying to figure out how the product is doing. Inkodye products are still available online or in a number of crafting stores, and have received quite average reviews – on the Dharma Trading website, which is an online art store for “fiber art supplies and clothing banks,” the Inkodye bottles have received very a rather average rating of 3.60 across 25 reviews. The bottles are quite pricy, costing $13.49 online for a quantity of 1 through 9 bottles, while a purchase of 10 or more bottles will run you $12.99 per bottle. In addition, numerous dyes are actually sold out as of this writing, meaning Inkodye could be spiralling down into bankruptcy and eventual failure.