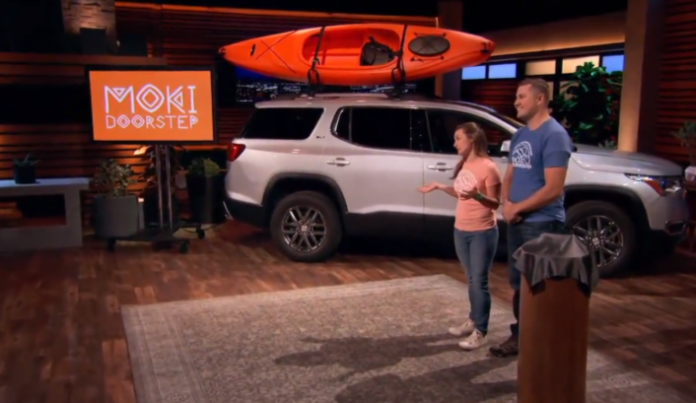 Being short does have its perks such as buying cheaper clothes or never hitting your head as you walk into a room. However, reaching for things will always be a problem for any short person. If it’s not the top shelves in your house then it’s the cargo carrier on the car roof that is a bit too far to be of any use.

Alyssa Brown was one short person whose height was a serious impediment to her having good times with her husband.  Her husband, Zach Brown, and she liked to go kayaking but whenever they did, she would have a hard time reaching for the Kayak which was placed on top of their car. Zach a tall firefighter had no problem reaching for their stuff on the hood but he did notice her problems.

Zach learned that the hook that locks a car door (the striker) is extremely strong; able to withstand 2200 pounds of force. He then thought that it could be used to place a step that someone could use to reach the car roof. With that, they invented the Moki Door Step.

The Moki door step can be used by a short person to easily reach the roof of the car. Although the invention process was complete, Zach and Alyssa needed some help launching the product and this is why they applied to be on Shark Tank. Their application went through and they were invited to be on the 9th episode of the 10th season. 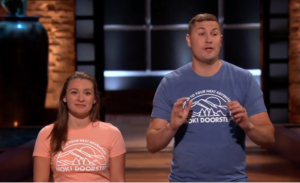 Zach and Alyssa Brown went onto Shark Tank seeking $150,000 for 5% of their company.  They started by giving a presentation where they showed their product and gave each shark a Moki Door Step to inspect. They had a car with them for their presentation and they asked for one of the sharks to come forward to test the product. Lori volunteered since she was short and so would likely use the product.

Alyssa also said that they weren’t selling at the moment but relying on orders made during the previous sales period. Lori then asked if the doorstep was patented and she was told that it was patent pending. Daymond then said that he knew somebody who had something similar. 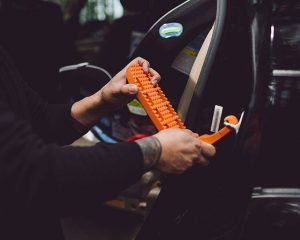 Daymond then told them of a kid who had pedals that he could place on a fence to elevate him that way if police were chasing him. The boy called the pedals the poki step after himself. Robert then asked them why it was called the Moki Step.

Alyssa said that Pueblo Indians would carve steps onto walls so that they could climb. They named the doorstep after the steps because they inspired them.

Kevin dismissed that notion saying that the person giving that valuation would not sign a check for that amount. Zach said that he had also been in conversation with a company that makes racks for a licensing agreement. It would be for at least 7 years with a value of at least $3,000,000. Daymond had to confirm that he meant that they would make $3,000,000 from the deal in royalties.

Zach confirmed this. The sharks commended him for the deal. The sharks wanted to know more about the deal. Zach told them that he would be paid a royalty of 12.5%. He also said that the contract came with minimums so if certain things weren’t done Zach and Alyssa could walk away from the agreement.

Zach said that he started the business with his uncle who had filed the initial patent. He then assigned the patent and company to Zach but got $1 royalty from every doorstep sold. Lori asked if this would happen forever and she was told that it was for 18 more years. Daymond then had to confirm if Zach had an uncle like Kevin. 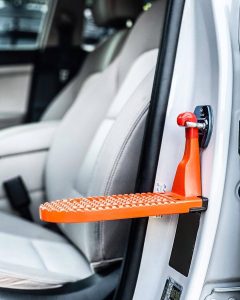 Kevin then asked Zach if he would be allowed to sell the moki door step anywhere else if he signed the licensing deal. Zach said that the deal was for North America; he could sell the device doorstep in other parts of the world.  Kevin then left. He said that the doorstep would be knocked off very soon and that they should try and focus on reducing its price because he did not see himself or others paying that $40-$50 for it.

Robert then asked Zach why he wouldn’t take the distribution offer as it shifted the risk from him to the company and guaranteed him money. Also, he could terminate the contract if the company failed to uphold its end of the bargain.

Zach said that he wanted to target the whole world. There were a billion registered vehicles in the world but only a quarter of those were in the USA. Daymond then offered $450,000 for 20%. Alyssa said that they couldn’t offer 20%.

Daymond offered them the $3,000,000 that they asked for. Zach asked him what he would do about the royalty and Daymond said that he would talk with Zach’s uncle. The Browns then accepted the offer. They said that Alyssa was pregnant and they were very eager to welcome the child as millionaires.

Moki Door Step Now in 2022 – The After Shark Tank Update 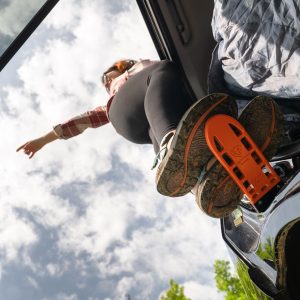 Although the agreement was to sell the company immediately, the deal did not go through. Daymond has continued working with the pair and working towards finalizing the deal and has even appeared in interviews with them but he has not yet purchased the company. Although Alyssa was expectant with their first child when they were on Shark Tank, the Browns now have two children and the deal is yet to be finalized.

Moki Door Step has partnered with Rightline, a company that makes work equipment. The product has its own website where it sells the doorstep but it also sells other merchandise from Rightline on it too. The Rightline logo is visible on the content.

The company is now valued at $5,000,000 and although the deal has not yet gone through, the invention has provided adequately for the Browns and their growing family.