Top 10 Most Expensive eBay Sales Ever 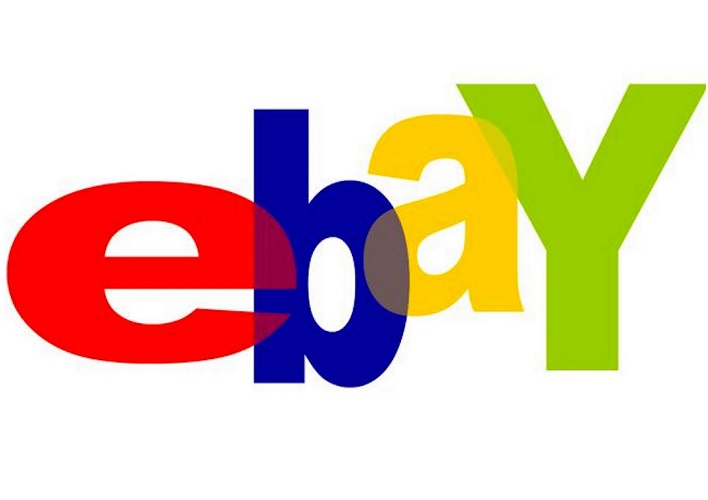 eBay has become the World’s biggest marketplace since an entrepreneur called Pierre Omidyar founded it in his San Jose living room in 1995, and it has quickly become the number one point for transactions on the internet. The site has seen some bizarre items put up for sale since its inception, from the angry husband who put his ex-wife up for sale for $1 million in 2008, to a grilled-cheese sandwich which was claimed to bear the face of the Virgin Mary and netted its owner a miraculous $28,000.

But there’s much more to eBay than just the weird and wonderful, the unique virtual set-up enables users to buy almost anything, so just what have been the top ten most valuable items sold on the site during its eleven year history? Step this way and all will be revealed. 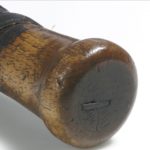 Chicago White Sox baseball legend ‘Shoeless’ Joe Jackson was one of the most celebrated players of the early twentieth century. Babe Ruth attributed his technique to Joe, and Shoeless still holds the third highest career batting average in major league history. That’s all the more remarkable when you consider that Joe’s career came to an abrupt, and controversial end in 1919. After the White Sox lost that years World Series, Joe, along with seven of his team-mates, was accused of throwing the game in exchange for a $5,000 bribe. All the players were acquitted of any involvement in the scandal by a specially convened grand jury, but the recently appointed commissioner of Baseball, Kenesaw Mountain Landis, was determined to make an example of them, despite no evidence of any of them ever having been involved in match-fixing. All eight men were banned for life, and Joe protested his innocence until his death in 1951, aged 64.

Joe’s favorite bat was a tobacco stained, 48 ounce slice of Hickory that he called ‘Black Betsy’, and it was an iconic symbol of his phenomenal success. Fans would chant ‘Give em Black Betsy’ when he came to bat. It was sold by Joe’s nephew to Rob Mitchell, a sports memorabilia collector in 2001 for $577,610, making it the most valuable baseball bat ever. 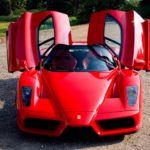 In the World of the rich and famous, a blindingly fast sports car is often a common prized possession, but some vehicles are so exclusive that you need more than just bundles of cash to acquire one. The Enzo Ferrari was just such a car, it was produced from 2002 to 2004 to celebrate the manufacturers first Formula One championship title of the new millennium, and it had a limited production run of just 400. The six litre engine was a specially modified V12 that included several elements of formula one technology to produce a top speed of up to 221 MPH. Existing Ferrari owners were specially invited to snap up one of the few available models during production, which they did enthusiastically, leaving none available to anyone else. It was a dream come true for some enthusiasts when one of the prized cars was listen on eBay in 2004. It was purchased by a Swiss collector for just over $1 Million in eBay’s highest priced European sale at the time. 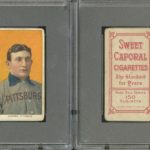 The most fanatical collectors of sporting memorabilia can be found in the World of Baseball cards. The rarest cards attain an almost mythical folklore amongst collectors, and the most valuable card of all was sold on eBay in 2000. It had gained attention amongst collectors a decade earlier, when hockey legend Wayne Gretsky bought it. The mint condition ‘Gretzky T206 Honus Wagner’ card was originally distributed as a promotional item, in American Tobacco Company cigarettes. It was one of only fifty three known to exist after Honus refused to allow his name to be used to encourage younger fans to smoke. The eBay auction finished with collector Brian Seigel buying the card for $1.27 million. The card has been sold on again a few times since, most recently in 2007 when Arizona Diamondbacks owner, Ken Kendrick, paid $2.8 million for it, making it the most valuable baseball card in history. 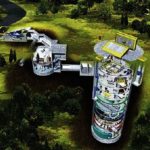 When relations between the superpowers began to warm up after the cold war, there were a surplus of long-range Atlas-F missile launch silos that were no longer needed. One such silo was located in the Adirondack Mountains in upstate New York, it was purchased in 2001 by developers Bruce Francisco and Gregory Gibbons who converted it into a luxury bunker, complete with an above ground home. The pair valued the property at $18 million, but the site eventually sold on eBay to an anonymous buyer for just $2.1 million. The property contained luxury fittings galore and was fully self-sufficient, with its own electrical system and water-processing equipment. 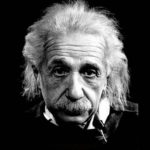 Albert Einstein wrote to German philosopher Eric Gutkind in 1954 in response to Gutkind’s book ‘Choose Life: The Biblical Call to Revolt’. In a rare insight to the father of Relativity’s attitude towards his own, and other, religions, Einstein reveals his scathing disregard for all faiths. The letter was written at Einstein’s home in Princeton, New Jersey, in his native German just one year before his death. It came complete with the original envelope, stamp and postmark and its authenticity was considered beyond doubt. With a reserve price of $3 million, the package attracted only two bids, but was eventually sold to an anonymous collector, for just over $3 million. 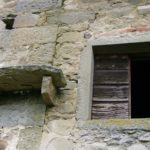 There are ghost towns everywhere, places that have been abandoned for a variety of factors, and Italy has an enormous number of them. The long, and often turbulent, history of the country, combined with its seismic activity, and mass-emigration to the Americas during the last century, have all combined to leave an incredible 20,000 villages through Italy deserted. A number of towns have been sold on eBay throughout the sites history, but the Pratariccia auction remains the single largest sum paid for an entire town. The village, comprising of twenty five crumbling buildings, on twenty acres of unspoilt land sat high in the Tuscany mountains east of Florence, and had been deserted since at least the 1960’s. It was auctioned in 2012 and fetched a price of $3.1 million, but the purchase was ultimately a poor financial investment. The new owner attempted to re-ignite interest in the town from developers, with a view to attracting tourists back to the area, but he was unable to do so and auctioned the town on again in late 2015. He received only $2.4 million in the sale. 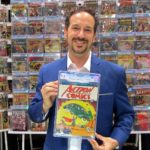 Did I say Baseball card collectors are the most fervent and passionate? I may have been mistaken. I would hate to exclude the incredible passion that true Comic and Superhero fans hold for the rarest of publications, and there can be no more popular Superhero, than the original and best, Superman himself. Superman’s first appearance came on the cover of Action Comics #1, published in June 1938, which is considered by fans to be the start of the Superhero genre. The issue sold for 10 cents and had a first print run of 200,000, which sold out within a day. An eBay auction for a ‘Near Perfect’ condition copy, one of only 50 unrestored copies believed to still exist, was won by New York’s Metropolis Comics and Collectibles in August 2014. The seller Darren Adams, owner of Pristine Comics in Washington took $3.2 Million for the sale, making the comic the most expensive one in existence. 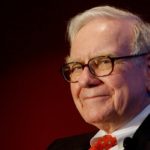 Warren Buffett is commonly referred to as the ‘Oracle of Omaha’, due to his unerring accuracy when it comes to choosing investments to make. His every word is followed by the investment community, so respected is his opinion. The eighty-five year old, worth in excess of $65 Billion, is widely considered to be the most successful investor of all time, yet famously lives a lifestyle of frugality. Since 2000, Warren has held an annual auction on eBay, for the opportunity to take a power-lunch with him. The lunch takes place in the Smith & Wollensky Steakhouse in New York City, with the proceeds going to the San Francisco anti-poverty charity GLIDE. The winner can take up to seven friends with them and the auction is always hotly contested. The 2012 auction raised the record figure of $3,456,789, with the prize going to an anonymous bidder. It’s possible that the unknown bidder came back for a second course, as the winning bid in the 2016 auction equalled the record figure exactly. 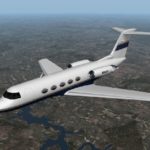 The aviation category was launched on eBay in 2001, and it wasn’t long before the category produced the highest sale in the sites history at the time. In August of that year an aviation company based in Texas auctioned a Gulfstream II Jet, with a reserve price of $4 million. There were only 258 of the jets ever manufactured, and their rarity leaves them highly sought after by rich individuals and smaller airlines alike, being capable of flying twelve passengers in the lap of luxury. The last day of the auction saw a frenzy of activity with the eventual winner, an African Charter company, finally securing the sale with a bid of $4.9 million. 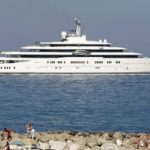 When you’re one of the mega-rich, things can get fairly dull. One person can only own so many mansions and vintage cars before things start to get a little repetitive. Fortunately for the incredibly wealthy, they can always find something incredibly expensive to spend their enormous income on, if you’ve got a yacht, then you can buy a mega-yacht, but if you’ve got a mega-yacht and you’ve still got money coming out of your ears, what’s next?

The answer is a Gigayacht, a 405 foot floating palace dripping with all the essential add-ons that your average billionaire requires. There are ten multi-level VIP suites that come equipped with their own movie theatre, tennis courts, gym, you name it – the Gigayacht has got it. There’s a pad to put your helicopter down and enough fuel capacity to stay at sea for years, and of course there’s a whopping price tag on the enormous vessel. In 2006 mega-rich Russian businessman and investor Roman Abramovich bought the vessel in eBay’s most expensive auction to date, eventually paying an incredible $168 million for the ship. And of course, when you’re as rich as Roman Abramovich, sooner or later you’ll be looking for something else to make life less dull. In 2013 he purchased another Gigayacht, this one the second largest in the World at 533 foot, with an estimated cost of $500 million.