Right away, the first glance at the Zeus Thunder Pen and you can tell this is something special. Instead of the typical, crappy rubberized finish that gives the pen a complete look, the Zeus Thunder uses PVD, Physical Vapor Deposition, to actually give the look some use. The PVD technique builds up a coat around the pen, which protects it from minor chips and scratches – think of PVD as a substance or method similar to beeswax.

Unfortunately, while the Thunder Pen is amazing quality, the add on tanks that come with the pen are fairly “meh.” While they have an outer metal shell, most of the tank is a plastic, which makes it feel somewhat cheap. The Zeus Thunder does cover up the plastic tanks, but I feel like if I were to drop the pen or the tank, then something dangerous could happen. There are alternatives available in a higher quality, fortunately, and these change out the plastic in favor of a nice stainless steel. 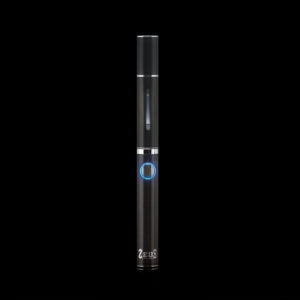 The Zeus Thunder has numerous add ons available for it, including the Z-erb, the Z-wax pro tank, and the Z-oil pro. This is where the Zeus really shines and performs well – not only do you get a solid liquid vape, you can also vape on dry herbs and concentrates. The Z-wax pro is a stainless steel mouthpiece and chamber that is capable of holding waxes and concentrates; the Z-oil pro and Z-Wax Pro has an acrylic shell and a stainless steel mouthpiece.

Since the pen revolves around the neat “tank system,” the Zeus Thunder is super easy to get into vaping. Load a tank up with whatever goods you desire, load the tank into the pen, and just go. Unfortunately, since I have fat sausage fingers, I found loading the tanks to be a little bit of a challenge.

The Zeus Thunder is just a straight-up vape pen with some neat little add ons for vaping on other substances, so it works exactly how you might think – three clicks on, hold to draw vapor, three clicks off. It does have an automatic shut-off timer if it fires for more than 10 seconds. 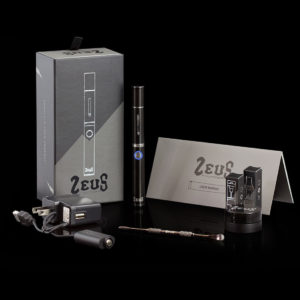 The Zeus Thunder is able to accept a variety of tanks, which is great and really lends itself to the attractiveness of the vaporizer. However, I was unable to find any clear information about one of the worst parts of vaporizing, which is the atomizer. I still am not sure if the liquid tanks require an atomizer, or where I can even find a replacement one if I chose to keep using the e-liquid tank that was included with the Zeus Thunder. Fortunately, the wax and herb chambers do not require any atomizers and work through conduction. Conduction heats through a shared surface.

The Zeus Thunder is also equipped with an industry-standard 650 mAh battery, meaning this vaporizer should last upwards of 4 or 5 hours of consistent use.

Zeus Arsenal, the full name of the company behind their awesome line of vaporizers, really has something cool on the market here. This vaporizer is one of the only vaporizers I can name that successfully capture a number of markets, and actually serves to work quite well in the markets that it a part of.
The Zeus Thunder works great and delivers an amazing vape; the fact that you can vape 3 different types of substances is just a neat little additional feature. However, this really makes the Thunder pen a widely sought-after vape pen. In addition to Zeus Arsenal being a great vaporizer maker, they also have a crazy amount of support for their product – Zeus products are backed with a year warranty, and a variety of side-products are also available. One product I would like to mention is the Zeus Iceborn, which can hook up to your Zeus Thunder and work to cool down the vapor. Cooler vapor is much more pleasing to vape on, and gives the effect of a more full hit.

The Zeus Thunder 2 pen is the most recent release of the Thunder line, and can be found on Vaporizera.com for the price of $89.99.