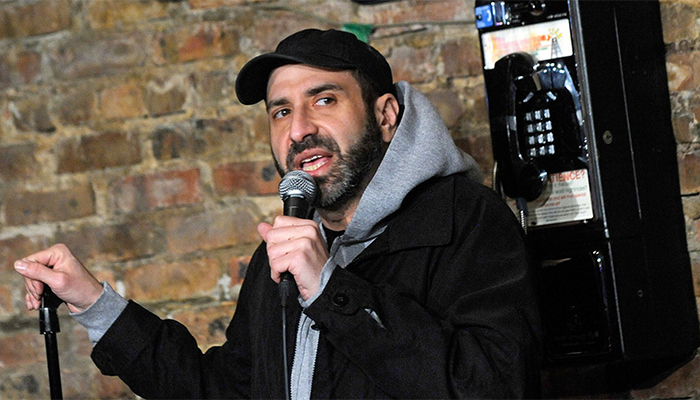 Dave Attell is a stand up comedian best known for being the host of the Comedy Central television series, Insomniac with Dave Attel and The Gong Show with Dave Attell. Having first made his television début in 1988 on the VH1 stand up comedy show, Stand-Up Spotlight, Attell has since grown to become one of the most recognized names in the comedy world. Some of his earlier appearances on the small screen as a comedian during the 90’s include Young Comedians Special (1995), HBO Comedy Showcase (1995), HBO Comedy Half-Hour (1996), Live at Jongleurs (1997) and Mr. Vegas ALl-Night Party Starring Drew Carey (1997). However his most well-known appearance on television at the time was probably that of when he starred on the talk show, The Late Show with Letterman.

Attell’s appearance on the late night talk-show would ultimately lead him to be discovered by Lorne Michaels ー the creator of the sketch comedy series, Saturday Night Live. Impressed with the comedian’s appearance on The Late Show with Letterman, Michaels later offered Attell the opportunity to work as a writer on his show, with the possibility of occasionally working as a performer. Having accepted the offer, Attel then worked on Michaels’ series until late 1994. The next year, he would go on to star on the HBO comedy specials, Young Comedian Specials and HBO Comedy Showcase. Attel later continued to work as a writer for various television series until the early 2000s.

Besides being a comedian and a writer, the man is also an established actorーhe first appeared on television in the short, Caesar’s Salad in 1990, two years after his début on the small screen as a comedian. Throughout the next few years, he would star in a handful of TV shows while working on his stand-up comedy career; some of his acting projects during that time include Oddville (1997), Everybody Loves Raymond (1997), Los Enchiladas (1999), The 11 O’Clock Show (2000) and Pootie Tang (2001). Not wanting to part ways from acting, Attell would ultimately continue his career acting alongside his career as a comedian throughout the next decade. 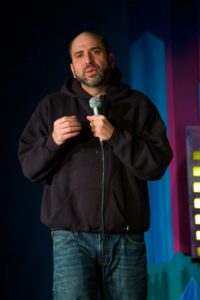 Born on January 18, 1965 in the city of Brooklyn, New York, Dave Attell has two brothers and a younger sister named Monica. Growing up in Nassau County with his siblings and cousins, he was known to have kept to himself during his early childhood. As a teen, Attell attended South Side High School however he would often find himself fantasizing about other things during class. After graduating from high school, he enrolled at NYU where he studied film and television; he later graduated with a bachelor’s degree in communications from the institution in the late 1980’s. Following his college graduation, Attell found work at a local restaurant.

Frustrated with the direction his life was taking in the food industry, Attell soon began to hit up the comedy club scene at night after work. According to the comedian himself, his first gig as a stand-up comedian was at a Levittown comedy club called “Governer’s”ーone that he had later reportedly “bombed.” Attracted to the comedy lifestyle “which allowed him lots of opportunity to be alone”, Attell soon began to perform at various venues across the city. After having worked at a number of comedy clubs, he eventually landed his first television appearance in 1988 when he was cast to star in the VH1 comedy series, Stand-Up Spotlight!. Little did he know at the time, that he would soon appear in a talk show the following year that would ultimately jump-start his career in the show business.

In November 1993, Attell guest starred on the widely known talk show, The Late Show with David Lettermanーit would be one of the comedian’s greatest appearances on television at the time (he would continue appearing occasionally on the show throughout the 90’s). Having liked what he saw on the late night talk show, Lorne Michaelsーthe creator of the comedy series, Saturday Night Live later offered Attell the opportunity to work on his show as a writer; he would also be given the occasional chance to perform on the show himself. Attell accepted the offer shortly afterwards and began working on the show as a writer until late 1994.

The next year, Attell appeared in two HBO television specials, HBO Comedy Showcase and HBO Comedy Half-Hour; he would also eventually be offered his own hour-long TV special on the network. Throughout the rest of the 90’s, he would continue to appear in a handful of television series and films including Kicking Aspen: Extreme Comedy (1996), Live at Jongleurs (1997), Mr. Vegas All-Night Party Starring Drew Carey (1997) and The N.Y. Friars Club Roast of Drew Carey (1998). 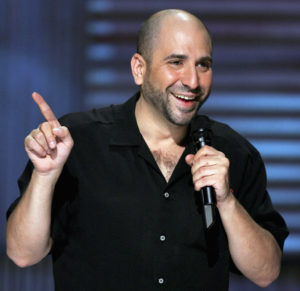 After years of climbing up the ladder, Attell was finally offered his own television series in 2001 titled, Insomniac with Dave Attell. Having premiered on the Comedy Central Network in August 2001, the show followed Attell (who acted as host), as he traveled through various cities late at night (thus the show’s name); each episode would begin with him performing at a local comedy club and continue with him stopping at various restaurants, meeting a number of fellow late night workers along the way. Throughout the 30 minute episodes, Attell is also known to crack jokes with bystanders and take photos with individuals with a personal disposable camera. A hit amongst viewers, Insomniac with Dave Attell eventually ran for a total of 45 episodes, spanning four seasons; the finale aired in November 2004.

During the next few years, Attell continued to star in numerous television series, including the TV special, Dave Attell’s Insomniac Tour Featuring Sean Rouse, Greg Giraldo and Dane Cook in 2005ーwhich followed the stand-up performances of the trio in Las Vegas. Some of the comedian’s other works and projects during the period include Just for Laughs (2005), Minding the Store (2005), Mind of Menica (2006), Dave Attell: Hey, Your Mouth’s Not Pregnant (2006), Last Laugh ’07 (2007) and Turbocharge: The Unauthorized Story of the Cars (2008).

In 2008, Attell also acted as the host for the comedic game show, The Gong Show with Dave Attell. As a remake of the Chuck Barris variety series from the 70’s, each episode featured a group of contestants who performed various talents in front of a panel of celebrity judges; the eventual winner of the competition would then go home with a cash prize of $600 and a commemorative trophy. The series ran for eight episodes from July to September 2008. 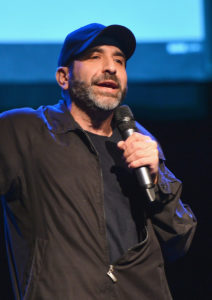 Besides his work as a comedian, Attell was also acting. In 1990, he landed his first minor acting role in the television short, Caesar’s Salad. Since then, he has gone on to appear in a number of TV series and films; some of his other early acting works include Dr. Katz, Professional Therapist (1995), Everybody Loves Raymond (1996), Los Enchiladas (1999), The 11 O’Clock Show (2000) and Crank Yankers (2002)ーwith Everybody Loves Raymond probably being the most noteworthy at the time. Created by Philip Rosenthal, the American sitcom revolved around the life of protagonist Raymond Baroneーa magazine writer living in Long Island. In the series, Attell portrayed the role of Dave, Raymond’s long time friend and fellow coworker.

In 2003, Attell landed his second most notable role when he was cast as Brad Campbellーa guest character in the NBC series, Ed. First premiered in October 2000, the comedy drama centered around the life of Ed Stevens, a lawyer from New York who one day, comes home to find his wife cheating on him after having been fired from his job earlier in the day. A huge hit amongst viewers and critics, the show had won numerous award nominations during its run, including one for a Prime time Emmy Award in 2001. The series ran for a total of four seasons and eventually ended in February 2004 after a total of 83 episodes.

Two years later, Attell also made a guest appearance in the critically acclaimed American sitcom series, Arrested Development as himself. Originally premiered on the Fox Network in November 2003, the show revolves around the formerly well-off Bluth family who consists of dysfunctional members. Since its début, Arrested Development has received widespread recognition and has also won a number of big name awards including six Prime time Emmys and a Golden Globe Award.

Besides acting behind the camera lens, Attel has also lent his voice to multiple television shows and video games such as Outlaw Golf 2 (2004), Leisure Suit Larry: Box Office Bust (2009) and Scooby-Doo! Abracadabra-Doo (2010). He continues to do voice-over work to this day. 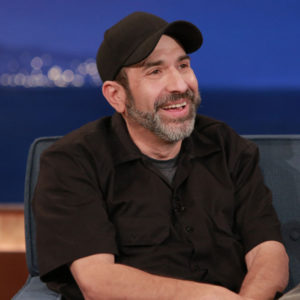 While Attell is an actor, he will always be a comedian firstーwhich explains why he’s been traveling on a tour to perform at various clubs across the continent. According to his schedule, it looks like he’ll be hitting up the local clubs at Philadelphia before slowly making his way to Washington, D.C. and eventually towards the west coast. However as much as Attell loves the performing lifestyle, it may all be ending soon as hinted recently in an interview by the comedian himselfー“I can’t do it forever”. But for now, he’ll still be performing; and if you’re interested in seeing him, it’s still not too late to purchase tickets for his upcoming shows.

On the small screen, Attell had recently appeared on the late night talk show, Conan. After talking briefly on the show about how he’d noticed that many of his fans had tattoos, the comedian wasn’t shy about sharing his dislike for owlsーa bird that was apparently, way too overdone in the tattoo world (in his opinion). In the hilarious interview, Attell later proceeded to talk about the probable taste of the nocturnal bird, going as far as comparing it to chicken. While it wasn’t the comedian’s first time starring on the talk show (he had appeared numerous times before the previous years), it sure was the first time he’s ever talked so passionately about how he wasn’t a fan of owls!

As a voice-actor, the comedian has also been busy doing voiceover work for the upcoming animated feature film, The Adventures of Drunky. Created by Augenblick Studios, the movie will follow the life of a character named Drunky after he finds himself in a realm between heaven and hell in order to save his girlfriend after falling victim do a cosmic bet made by God and Satan; Attell will be voicing none other than the devil himself in the R-rated film. Other members of the cast includes Sam Rockwell, Jefffrey Tambor, Nina Arianda and Steve Coogan.

If you’d like to stay connected with Attell and his humor, then you can do so by following him on Twitter (@attell) or Instagram (@daveattell). Also don’t forget to visit his official website for the schedule of his upcoming tours!