The Wedding Wagon Update- What Happened After Shark Tank 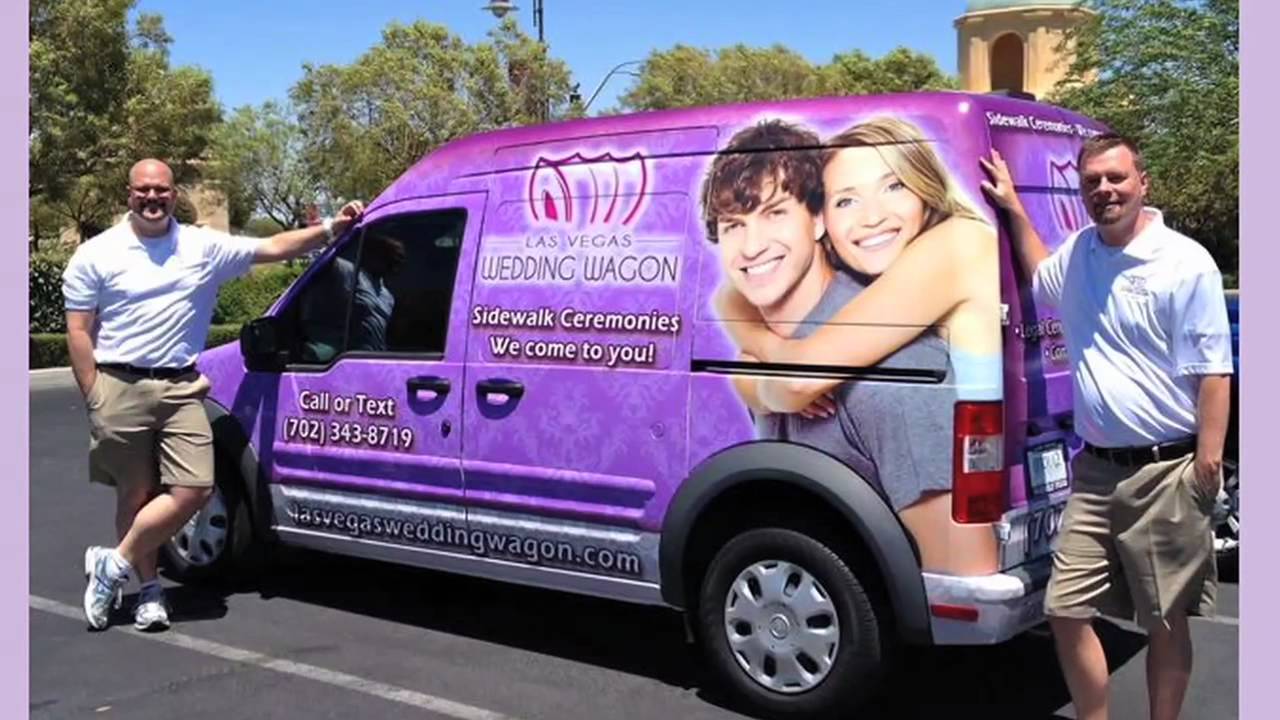 The Wedding Wagon Before Shark Tank

James Cass and Adrian Gonzalez have traveled from Las Vegas, Nevada, all the way to the Shark Tank. The two of them represent their business, The Wedding Wagon, and are seeking an investment of $125,000 in exchange for 20% equity in their company. The Wedding Wagon, James explains, is the world’s first mobile and affordable wedding service. Right now, couples that want to get married only have a couple of options – a boring ceremony down at the Justice Department, or a big, costly wedding at a church or a hotel. This is where the Wedding Wagon comes in – rather than going to the chapel, the chapel comes to them!

All it takes is a few calls to the Wedding Wagon business, and the Wedding Wagon will meet them at a place and time of their choosing. Included are the options to also bring an officiate and a photographer to the wedding, to make things official and have a memorable ceremony. To give an example, James picks on Kevin – if Kevin wanted to renew his vows with Barbara, all Kevin would have to do is pick up the phone and call the Wedding Wagon, and what better location than Shark Tank? James then explains that they will demonstrate exactly how the Wedding Wagon works.

The Wedding Wagon On Shark Tank

Opening the trunk of the van, Adrian slides into the back of the Wedding Wagon, which is actually a booth for the official or priest to stand in. Barbara and Kevin then step up, and James hands flowers to Barbara and says he will be Kevin’s ringbearer – Kevin jokes that he will need a lawyer for a prenup immediately. Adrian then performs an example wedding ceremony between Mr. Wonderful, and The Real Deal, popular nicknames for both Kevin and Barb respectively. Surprisingly enough, Kevin and Barb exchange a full smooch on the lips, all without blood or harassment. 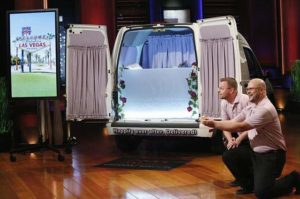 James explains that the Wedding Wagon was launched in the wedding capital of the world, Las Vegas, and they are ready to take the concept nationwide. With the help of the Sharks, they can bring weddings all over the United States. Lori asks the first immediate question on everyone’s minds – how much does it cost to get married in the Wedding Wagon? The business was launched at a price point of $99, and they could theoretically manage 10 in a day, but they were running between 6 and 8 on their busiest days. Rober then asks about sales in the last year, which were surprisingly $240,000, only with the two of them operating the entire business.

Robert admits he is blown away by those numbers, but Kevin wants to know more about the expansion plan – Las Vegas is a “hokey” enough city that people tend to elope to and perform odd marriage rituals. However, Adrian says that now is a very, very exciting time for the Wedding Wagon – they actually sold the Wedding Wagon in Las Vegas to new owners so they could devote time into launching a franchise company over the world. The two of them envision Los Angeles Wedding Wagons, San Francisco Wedding Wagons, and many more cities. Robert then asks what the Wedding Wagon was sold for, which Adrian answers was $125,000.

Kevin then asks if the two of them sold the rights, which Adrian confirms, but this means that the two of them will never be able to establish the Wedding Wagon or a similar business in Las Vegas ever again. However, as Mark explains, things get worse; they had the whole game to themselves, but the reality is that they could not find enough demand in the “wedding capital of the world” in order to get to a second truck. However, Adrian explains that they actually did hire on a second wagon and a second team, but their time was being taken out when an employee would call out sick or just not feel like showing up. An employee doesn’t have as much commitment as an owner, James explains.

However, Robert and Mark call James out for the statement – if the person was making them money, which the employees were, then they were fine as they were. Mark explains that those employees accounted for half of the sales, but now since the two of them sold off the one Wedding Wagon that they had, they truly have nothing. Mark is immediately out of the deal.

Robert asks what the franchise fee is going to be, to which Adrian replies that it will cost $25,000 in order to even receive the license for the franchise. All of the other Sharks are distraught and upset, and Lori explains that anybody could purchase a van and do exactly what James and Adrian are doing. They just don’t have something that’s proprietary and saleable, and Lori is also out of the deal.

Robert claims that the business model and the pair’s actions do not make sense to him – they had the business, and Robert says that if he had a business that he personally took from $0 up to sales of $125,000, he would want to ride the business out for as long as possible. However, since the pair have sold off the business and will no longer receive the money generated from that, they are complete fools – they are trying to start a new business that is unproven, and have lost a gigantic stream of capital that could otherwise fund them. Robert is out of the deal as well.

Kevin explains that people normally start with an idea and find that there is franchise potential in that idea, and then bring it to Las Vegas – never the other way around. Most people, in Las Vegas, would sign over the $25,000 in exchange for a day of sitting around in a truck and seeing just how many weddings James and Adrian perform. However, the two of them have done the opposite and something very strange, and shot themselves in the foot – they sold the model business, so now they can only show that the business, that they sold, works in Las Vegas. This doesn’t make any sense to investors, and Kevin is out of the deal as an investor.

When Barb was standing up there marrying Kevin, she explains, she thought it was the greatest gimmick in the world – the idea that you could call someone, or go online to have a wedding pull up to your location is a great idea. But, the bad news is that they gave away their “show-and-tell;” Barb admits that if they still had the original business that proved itself to be a sustainable cash cow, she would be in without hesitation or even working out a deal with the two behind the Wedding Wagon. But since they sold off the business model that was proven to be effective, Barbara is the fourth Shark out.

Unfortunately, the Wedding Wagon does not find its investment in the Shark Tank, and seems to have crippled themselves – in the interview after their appearance on the Shark Tank, Adrian and James both admit that if they had a time machine, they would go back and never, ever sell their proven Las Vegas business.

The Wedding Wagon Now in 2018 – The After Shark Tank Update

Without a doubt, the Wedding Wagon can be chalked up to being a huge favor. Classes are mandatorily held out in Las Vegas, requiring the potential student to fly out and attend classes for as few as 2 days but as long as 7 days.