What Happened to Toby Keith – 2018 News and Updates 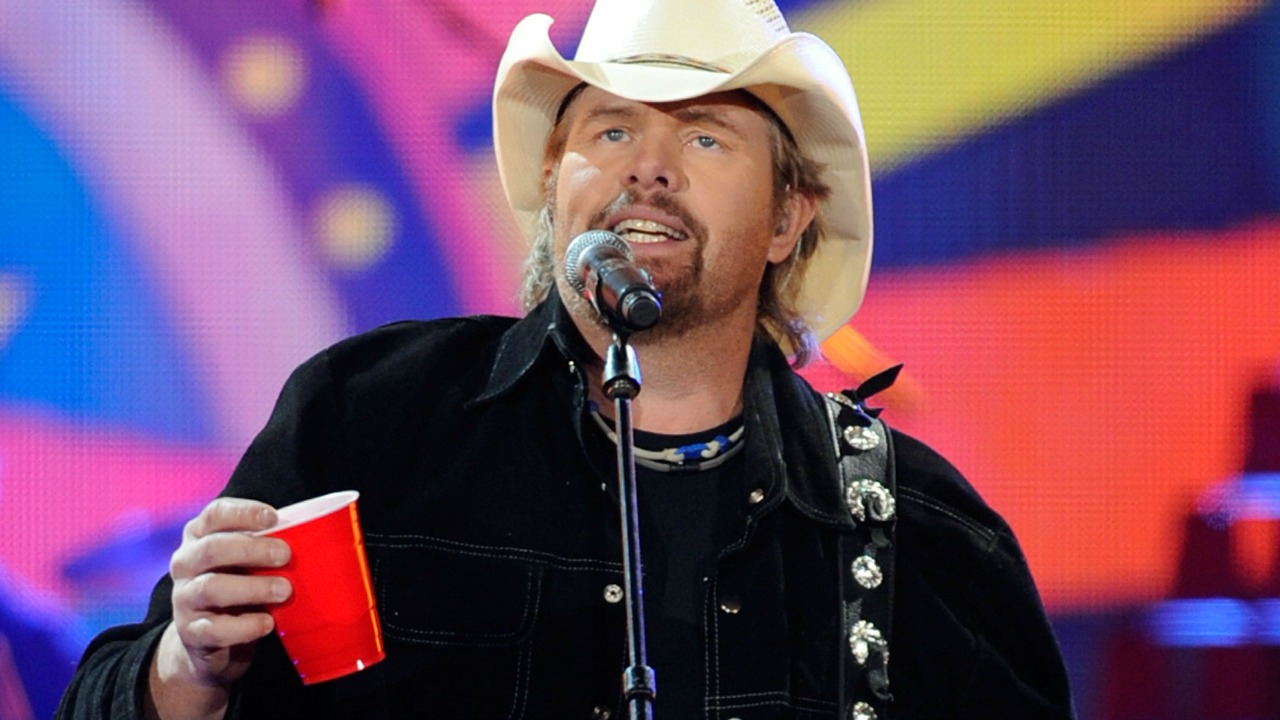 Known for his dusky baritone voice, Toby Keith first entered the country charts with his hit single, Should’ve Been a Cowboy in 1993. A guitarist ever since the age of eight, Keith took part in several bands during his early years; after working for a few years in the oil fields however, he eventually found himself led back to his passion of music. Persevering towards his desire to become a recording artist, Keith later landed a contract with Mercury Records in the early 1990’s. Following a successful single that went straight to the top of the charts, he released his debut eponymous album, Toby Keith in 1993. Since then, he has released over twenty full-length records and over eighty singles. With over 40 million record sales under his belt, Keith is the fifth best-selling country musician in the United States.

Considered to be one of the most celebrated American country artists, Keith has charted a stunning amount of twenty singles at the number one position as well as another twenty or so amongst the top ten. Two of his singles, Beer for My Horses and As Good as I Once Was ultimately stayed on the charts for a record-breaking forty-two days each. A highly talented man, he has also won numerous music awards throughout his career including four American Music Awards, seven Academy of Country Music Awards, two British Country Music Association Awards, amongst a few others. Since the early 2000’s, he has also embarked on well over a dozen tours around the world.

A proven sensation in the music industry, Keith has also made a number of appearances in both television and film. As an actor, he made his debut in the theatres in the 2006 music drama film, Broken Bridges. Another one of his notable works include the 2008 American comedy, Beer for My Horses, where he starred opposite of comedian Rodney Carrington. In addition to his show biz career, he has also a successful business. Having opened up several restaurants across the United States including “Toby Keith’s I Love This Bar & Grill” located in Oklahoma City, Oklahoma, Keith is also the owner of clothing line named, “TK Steelman” which was first established in 2009. With a prosperous music career as well as as a handful of well-off companies, Keith is regarded as one of the wealthiest celebrity stars in the country.

But what has the man of the cowboy hat been up to recently? What has he been working on these past few years? What happened to Toby Keith? Where is he now in 2018? 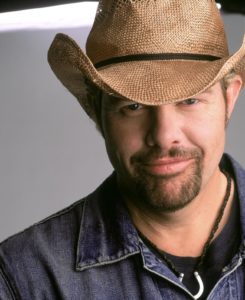 Born on July 8, 1961 in Clinton, Oklahoma, Toby Keith Covel is the son of Hubert K. Covel Jr., and Carolyn Joan; he has an older sister named Tonnie and a younger brother named Tracy. Having spent most of his grade school days in Forth Smith, Arkansas, he later moved with his parents and siblings to the suburbs of Moore, Oklahoma. A curious lad, Keith first became interested in music after he saw several music performances at his grandmother’s Supper Club back in Forth Smith. Wanting to spend more time around the musicians, he eventually took up a few odd jobs around the supper club; he would later be given the opportunity to play briefly with the band up on the bandstand.

As a teenager, Keith went to Highland West Junior High and Moore High School located in the southern suburbs; an avid athlete, he was an active member of the school football team where he played defence. After graduating, he opted not to go to college but instead went to work at the oil fields as a derrick hand; it wasn’t long before he worked his way up to becoming an operations manager. Wanting to reconnect with music, Keith and a few of his friends formed a band called the “Easy Money Band” during the late 70’s; together, they performed in various local bars at night.

After having worked in the oil fields for a number of years, Keith ultimately found himself unemployed with the industry’s rapid decline in the 1980’s. Faced with this, he soon fell back to playing semi-pro football for the defensive end while carrying on to play music with his band. Taking the opportunity to focus on the thing that he loves, Keith recorded and distributed numerous copies of a demo-tape which the group had made, to various record labels in the city. However it would prove to be unsuccessful; disappointed at the results, the aspiring musician then promised himself that he would give up on becoming a musician if he wasn’t able to secure a recording contract by the time he was thirty years old. Not long after that, he landed a deal with Mercury Records in a twist of fate, after a fellow fan and flight attendant had given one of the band’s tapes to Harold Shedd, the executive of Mercury. 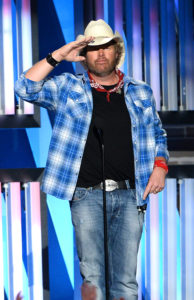 In February 1993, Keith released his first professional recordーa single entitled, Should’ve Been a Cowboy. An immediate hit upon its release, the album was significant in helping to propel the artist into celebrity status. Produced by Harold She’d and Nelson Larkin, Should’ve Been a Cowboy climbed up to the number one spot in the Hot Country Songs Chart; it was also as sell-out in Canada where it similarly peaked at number one on the RPM Country Tracks Chart. As one of the most played country tunes of the 90’s, the single has since received over 3,000,000 spins on country radio stations.

Following his initial success, Keith released his self-titled debut album, Toby Keith in April 1993. Featuring the hit single from a few months prior, the album also included nine other tracks, most of which were written and composed by the singer. Given generally favourable reviews by critics, Toby Keith peaked at number one on the US Billboard Top Heatseekers Chart and at number seventeen on the Billboard Top Country Albums Chart; it eventually also reached number 99 on the Billboard 200. As of October 1994, the album was certified Platinum by the RIAA after having sold over 1,000,000 copies in the United States.

Upon signing a new recording contract with A&M Records in the mid 90’s, Keith released his third studio album, Blue Moon under the label in 1996 (which would also be his first and last record with A&M as they’d later be bought by Mercury Records). Consisting of ten tracks, the album peaked at number six on the Top Country Albums Chart and at number fifty one on the Billboard 200. Given a B- rating from Entertainment Weekly, Blue Moon soon spawned three singles: A Woman’s Touch, Me Too and Does That Blue Moon Ever Shine On you?, all of which would chart amongst the top ten on the Billboard Hot Country Songs Chart.

Before the end of the date, Keith released two more full-length albumsーDream Walkin’ in 1997 and How Do You Like Me Now?! in 1999. The former would be certified gold while the latter would ultimately be certified platinum by the RIAA. 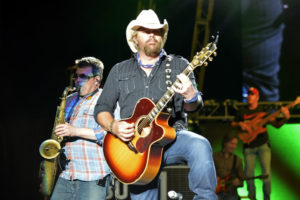 A year after the turn of the millennium, Keith released his sixth studio album entitled, Pull My Chain in August 2001. Dedicated to his father, who had passed away a few months prior, the album featured thirteen songs and was his second record under DreamWorks Nashville. A commercial hit, Pull My Chain peaked at number one on the Billboard Top Country Albums Chart and at number nine on the Billboard 200; it later spawned three number one singles: I Wanna Talk About Me, I’m Just Talkin’ About Tonight and My List. In September 2002, the album received Double Platinum accreditation from the RIAA for having achieved over 2,000,000 sales.

Over the next two years, the country singer would hit a peak at his career with his albums, Unleashed in 2002 and Shock’n Y’all in 2003. Both critically acclaimed, the albums each peaked at number one on the US Top Country Albums Chart and at number one on the Billboard 200 Chart. The chart-toppers would later become Keith’s first records to achieve 4x Platinum status after having sold over 4,000,000 units each in the US. Carrying on with his music, he released five more full-length albums during the 2000’s including Honkytonk University, White Trash with Money, Big Dog Daddy, That Don’t Make Me a Bad Guy and American Rideーmost, if not all topping the charts.

In October 2010, Keith released his fourteenth studio album, Bullets in the Gun in October 2010. His fifth record under Show Dog-Universal music, the album would be the first to not produce a top ten single. Despite that, Bullets in the Gun debuted at number one on both the Top Country Albums Chart and the US Billboard 200 Chart and soon sold over 71,000 copies during the first week. Praised for its “joyful mixture of songs”, the album has sold over 323,000 units altogether as of 2011.

Since then, Keith has released four more studio albums including Clancy’s Tavern (2011), Hope on the Rocks (2012), Drinks After Work (2013) and 35 MPH Town (2015); out of them, Clancy’s Tavern would see the most success, having been certified Gold by the RIAA. 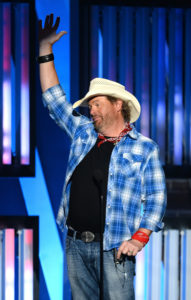 This year, the renowned country singer has been hitting the roads for a summer tour; an event that is scheduled to include over two dozen concerts and performances across the US. Set in motion on May 21,2016 at the KFC Yum! Center in Louisville, Keith’s Interstates & Tailgates Tour will continue until October 16,2016 at the Austin 360 Amphitheatreーthe final date on the calendar for now. Presented by the Ford F-Series, the tour also featured a contest in which audience members had an opportunity to win a 2015 Ford F-150 as well as an exclusive, personal performance by Keith.

Speaking of public appearances, Keith offered a very special fan with a very unforgettably birthday gift this September. Elda Woodroffe, a centenarian who had been a fan of the country star’s music for many decades, was given a visit by the singer himself at her 100th birthday which was held at the Denmark Fire Station. After hearing about the event from Ms. Woodroffe’s granddaughter Nicole on Twitter, Keith and his management agency arranged a special pair of tickets as well as meet and great passes to the elderly woman, who has attended seven Toby Keith concerts since turning ninety years old. There’s no doubt that it was one memorable birthday party!

If you’d like to stay up to date with the music star, you can do so by following him on social mediaーyou can find him on Twitter (@TobyKeithMusic) or on Instagram (@officialtobykeith). Don’t forget to also check out his official website over at tobykeith.com!