What Happened to Shawne Merriman – Now in 2018 Updates 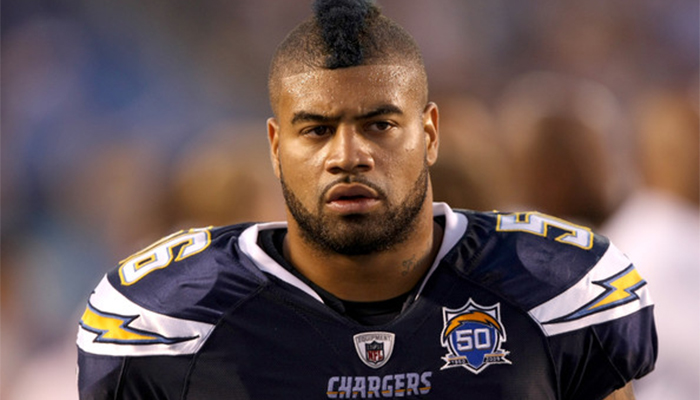 Shawne Merriman was an American football player best known for having been a NFL linebacker for the San Diego Chargers. Having first started to play the sport at the age of three, he had since grown to become one of the best defensive players the football league has ever seenーin fact, he was highly considered as one of the greatest linebackers of all time during his first three seasons playing for the NFL. Known for his incredibly fast speed, Merriman had also led the San Diego Chargers in term of sacks, during the three years which he had spent in the league. For his relentless play and talent in the sport, he was later awarded the Defensive Rookie of the Year Award.

Even back during his high school days, Merriman had been deeply involved with the sport. In one instance, he had rendered 4 opposing players unconscious in a gameーeffectively earning him the nickname of “Lights Out”. After graduating, he enrolled in the University of Maryland; he was later recruited to the college football team, the Maryland Terrapins football team. During his time there, he would play 13 games and eventually finish third amongst his teammates with a total of five sacks. Following his college graduation, Merriman would turn professional after having been chosen to play for the San Diego Chargers in the NFL draft of 2005.

During his first year playing for the San Diego Chargers in 2005, he played 15 games, and recorded a total of 15 sacksーwhich earned him the title of being one of the best rookies at the time. He would ultimately continue playing for the Chargers as the team’s linebacker for the next few years. However despite a number of promising seasons, Merriman would eventually meet with a number of injuries during his professional career, including those which involved his ligaments, foot, calf and knees; at one point, he was even told by doctors that he may have sustained an injury which may have been career threatening. After having played for the San Diego Chargers and the Buffalo Bills, Merriman announced his retirement from the sport in March 2013 at the age of 29. Throughout his professional football career, Merriman had played a total of 75 games and had recorded over 45 sacks.

Shawne Merriman’s Early Life and His Time in Amateur Football 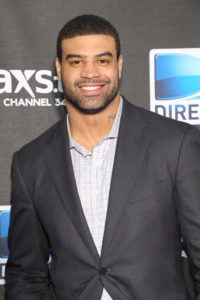 Born on May 25, 1984 in Washington, D.C., Shawne De Andre Merriman is the son of Gloria Williams. Raised in Upper Marlborough by his single mother, he faced many challenges during his early life including two house fires, and a number of difficult financial situations which led him to have less than ideal amounts of food and clothing growing up. Merriman recalled in a later interview that, not having electricity one night, his mother had lit candles around the home to allow for better lighting however one of them had tragically burnt through the TVーwhich led to the eventual burning of the whole house. Having lost most of their belongings in the fire, Merriman and his mother was then left to live in cheap motels and sleep in carsーa tragic story altogether.

In attempts to help their living situation, Merriman eventually began to work at the young age of 12 at a landscaping company owned by one of his uncles; he would work ten hour a day for a whopping five dollars an hourーit wasn’t much, but it was still better than nothing. As a teen, he attended Frederick Douglas High School; it was also during his high school days that Merriman first began to play football as a means of escaping from his situation at home. During his time on the varsity football team, he would eventually render four opposing players unconsciousーearning himself the nickname of “Lights Out”. For his talent and efforts in the sport, Merriman was named as the Defensive Player of the Year in Maryland at the time. Besides football, the athlete was also involved in basketball and had been part of the school’s basketball team; he would later be given the title of being one of the top basketball defenders in D.C. by The Washington Post.

After graduating from high school, Merriman went to the University of Maryland where he studied criminal justice. Known for his earlier achievements in football, he was soon recruited into the college’s football teamーthe Maryland Terrapins. During his first year with the team in 2002, he played 13 games and had ultimately finished third with a total of five sacks. Although he would constantly be plagued with injuries throughout the seasons, Merriman would never miss a football game, even if it meant gritting his teeth through the game. He would then play nationally after having been named to the ACC All Conference Team in 2003. At the time, Merriman also held the record for the highest vertical jump ever recorded in the history of the Maryland Football Teamーan astonishing 41.5″! 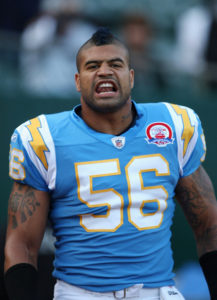 Following his college graduation, Merriman began his professional football career after having been selected by the San Diego Chargers in the 2005 NFL draft. During his first season with the team in 2005, the rookie held up exceptional well at a training camp and later played fifteen games, recording a total of ten sacks. Merriman had his best game of 2005 when he helped the team achieve victory in their game against the Indianapolis Colts during the fifteenth week. Having achieved six sacks in his initial four games, he was quickly awarded with the “Associated Press Defensive Rookie of the Year Award” in January 2006 for his accomplishments. The following month, the linebacker also took part in the NFL Pro Bowl which took place in Honolulu; although the team lost in the end, he had been successful in making three tackles and one forced fumble.

During his second year playing for the San Diego Chargers, things did not go as smoothly for Merriman as he was reported to have violated the league’s steroid policyーhe eventually received a four game suspension for the violation. While the linebacker had tested positive for a steroid named nandrolone, he later reasoned it to  be from a nutritional supplement which he had taken regularly at the time. After his suspension, Merriman once again took off in the games, recording three sacks and one interception in the initial two sets; throughout the season, he achieved a total of seventeen sacksーit would be his highest amount of sacks achieved in a season. Later that year, Merriman was also considered for the 2006 Defensive Player of the Year Award, however he was ultimately third in its balloting behind Champ Bailey and Jason Taylor.

In the 2007 season, Merriman played a total of fifteen games and was successful in achieving 68 tackles and 12.5 sacks. However despite his achievements, the San Diego Chargers ultimately finished the season at the AFC Championships having lost to the New England Patriots. During that year, Merriman was also named, three years in a row, to the Pro Bowlーat that time, he had accumulated 39.5 sacks.

After three years of playing professionally for the San Diego Chargers, Merriman eventually began to face difficulties during the 2008 season after having been afflicted with a number of injuries. During the training camp held early in the year, he suffered an injury to the knee and consequently had to sit out of practice for two weeks. Although his injury was initially said to have been fairly minor with an estimated recovery period of a few weeks, it was later reported to have been much more serious, as Merriman had torn the lateral collateral and posterior cruciate ligaments in his kneeーhe was even told by his doctors at the time, that he may have suffered from a career threatening injury. Despite having initially planned to play through his injuries against his doctors words, Merriman eventually underwent reconstructive surgery in his knees to repair the torn ligaments in September 2009; he was placed on the team’s Injured Reserve at the time.

Having (mostly) recovered from his injuries, the linebacker returned to the field once again for the 2009 season. However individuals observing the games would soon notice that between his newly reconstructed knees and nagging foot issues, he simply wasn’t the same player from the previous seasons. For one thing, despite having taken part in fourteen games, he had only managed to achieve four sacks throughout the seasonーone of the lowest in his career.

Following his less than subpar accomplishments on the field, Merriman began to express concern about the possibilities of being cut from the Chargers in 2010. While that later proved to be untrue, the linebacker was soon put back on the team’s Injured Reserve yet againーhe had reinjured an old calf injury during their game against Oakland. As a result, he had only participated in five weeks of the season. Similar to the previous year, Merriman would eventually only go on to rally four sacksーthe season would also be his last with the San Diego Chargers.

After playing briefly with his new team Buffalo Bills (and sustaining more injuries), Merriman later announced his retirement from the sport in March 2013. 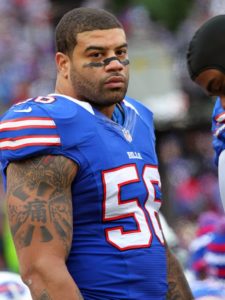 Although Merriman has retired from the sport, he isn’t quite out of the limelight just yet! Recently this April, the former linebacker made the headlines after having reportedly sued a teddy bear company for using his trademarked phrase of “Lights Out”. According to sources, Merriman had filed a lawsuit and had asked for millions in damages (although the exact amount has not been disclosed) from the Vermont Teddy Bear Company after they had supposedly printed and used the words “Lights Out” on various child and adult pyjamas. However despite the legal complaint made against the company, nothing seems to have resulted from the lawsuit as of yet.

Besides the recent ordeal with the teddy bear company, Merriman has also made an appearance lately on The Weather Network starring as a weatherman on the site’s “Celebrity Forecast” video. For the first time ever, the former pass rusher was seen in front of various weather displays, talking about rain and showーtalk about a definite change in pace! Since it was first uploaded in April of this year, the video has since been viewed over 4000 times. Who knows? Maybe Merriman has a future career waiting for him in the world of weather forecasting!

If you’d like to stay connected with the former NFL football player, you can do so by following him on Twitter (@shawnemerrian) or Instagram (@shawnemerriman). You’ll also be able to find him on Facebook under the same handle, @shawnemerriman!