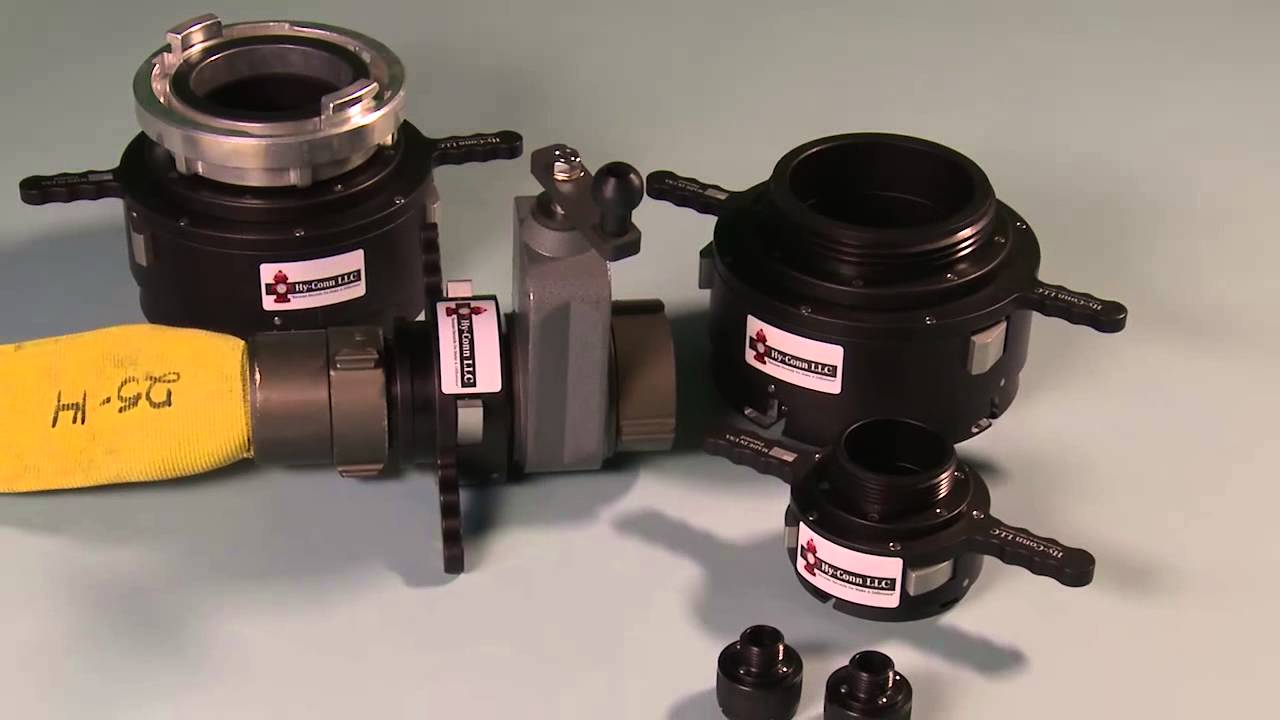 Jeff Stroope has been a fireman for a long time. He noticed something alarming – attaching the standard fire hose to a fire hydrant took up to 30 seconds, which is a lot of time during an emergency.  He invented the HyConn connector, which takes 3 seconds or less. Would the Sharks bite on this potentially life-saving idea? Let’s take a look. 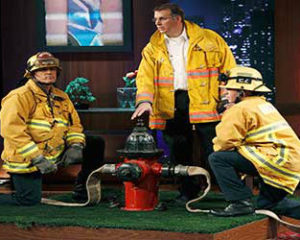 Jeff Stroope from Cabot, Arkansas started off his segment with his introduction video. He said that he was the creator of HyConn. Jeff stated that he was a full-time captain of the fire brigade, as well as a maintenance supervisor. The video showed the truck getting a call, and then going off with lights and sirens. Set over this but he was operating the truck one day and realize that it was taking too long to provide water to the fire scene. He decided he needed to come up with some way to fix that. That’s when he developed icon. He worked on high comment the side on the nights and weekends. He said that there’s nothing like it. He said that we’ve been fighting fires the same way for hundreds of years, and his product is going to revolutionize that process. Jeff said that icon had the potential to make millions comma but also save lives on a massive scale. That meant more to him than the money. He said that the product was ready to make money. Jeff wanted a shark to come in to help get the financing available for the product he’s already invested 11 years of his life into this product and he will not let it fail.

Jeff walked out onto the stage wearing his firefighter uniform, and flanked by two other firefighters. Jeff introduced himself to the Sharks, and said that he was the owner of hyconn LLC. He’s asking for an investment of $500,000 in exchange for 40% equity in the business. He has the Sharks to imagine that someone that they know and love was  trapped in a house caught on fire. Past them to imagine that those people could have been saved if the firefighters could get water to the house a moment sooner. Jeff said that he’d been a firefighter for 15 years now, and he tried to think of ways to save time to get water to the fire scene. He said that there are too many homes and American Dreams being destroyed by fire, and HyConn was the way to solve that problem. Jeff said at the HyConn was the world’s fastest way to connect and disconnect from the fire hydrant. The two professional fireman that he brought would help him demonstrate his product. One of them had the hike on with a standard hose while one of them had just the hose to connect to either side of the fire hydrant. I’ve had them start at the same time, the one with the HyConn was done in just a few seconds, while this firefighter with the standard hose was still screwing it on. Jeff then had the two firefighters demonstrate how fast the hike on could disconnect as compared to the standard hose.  Again they started on the same at the same time and the firefighter with the HyConn finished first by a large margin.

Jeff told the sharks that when you’re at a fire scene, every second batteries. He told them that the standard connections can sometimes take 30 seconds or more, well the HyConn can be done in less than three. The HyConn Also only took about a second to disconnect. Jeff told the sharks that there are thirty-three thousand fire departments across the United States, and said that the was Millions be made with this product.  He has the sharks who would like to take that Journey with him. Mark start off, asking Jeff where he was from. Jeff told him that he was from Arkansas. Mark followed up with a question about whether or not his current fire department uses the hike on period Jeff said that they would love to use it but they couldn’t buy straight from him since he was working there. Mark asked him how he planned on selling the hike on. Barbara said that there is only an eight-second difference between the two.  Robert asked if he was just going to go to different Fire Department and ask them to buy it just to save 8 Seconds. Robert asked if you thought that there is a budget for this and most Fire Department.

Robert asked if Jeff was planning on getting fire departments to mandate product.  Jeff said that he was working towards that, but had not gotten approval yet. Kevin wanted to know if their Distribution Systems that provide direct products to fire stations. Jeff confirmed that there was. Kevin asked him if he had approached them about taking on the hike on. Jeff said that he had, But they weren’t ready to buy the patent. Those Distributors had told him that they were willing to help him distribute the product. And put it in the product line. Robert asked him how much money he would need to start getting into that distribution, and just told him the $500,000.

Damon said that he couldn’t get over the fact that the Distributors wanted to take him on, but would not buy the patent . He went out. Barbara was next to go out, saying that she didn’t think that extra 8 Second Time Savings was worth the $7,000 that you the fire department would have to spend on the product. Robert said that he loved the design, and wanted to know why he wouldn’t be able to be used for oil pipeline. he said that another good idea would be to use the product for the hoses at home. Jeff pulled a smaller version of the high column out of his pocket and showed it to Robert. Robert looked very interested. Kevin and Mark asked why he waited so long to show them the consumer product. Just let them know that the product will be made out of plastic. Barbara asked him if it was part of the same deal. Jeff said it all fell under the same thing. Barbara asked him if he had a patent on it, and Jeff told her that it was included in the same pattern as the fire fighting equipment. Jeff said that he hadn’t tried to sell it yet, since he was still concentrating on the Fireside.

Kevin told him that there’s nothing wrong with the Fireside of it, but he was realizing that it took a lot of time and energy to change the entire industry. Kevin wanted to know why he hadn’t approached 2 or 3 of those big hose makers in the United States to Cut the smaller version licensed.  Jeff repeated that he hadn’t started on the household side of it at all. Mark said that he shouldn’t listen to Kevin, saying that $0.20 was way too low. Damon to ask him if there’s anything else in his pockets. Just laughed, and said that there wasn’t. Robert said that the small one was a really big deal. Mark said that he liked the small version so much that he was going to offer Jeff 1.25 million dollars for 100% of the company with a three-year Employment contract and $100,000 a year to run the show.  He wanted to pay Jeff a percentage of the profits after they hit certain hurdles along the way. Kevin told him to hold off on accepting that deal. Kevin said that he found the whole thing just tasteful, and told Jeff that he was being taken advantage of by Mark. Kevin said that he saw that Jeff was passionate about that fire hose piece of high column and that he just wanted the garden hose piece. He said that he would be willing to pay $500,000 in exchange for a hundred percent of that part of the business. In exchange comma Kevin would pay him 3% royalty and perpetuity. Kevin and Mark continue to fight over it. Kevin accuse Mark of sucking the life out of Jeff. Mark insisted that $100,000 a year would go a long way in Arkansas.

Robert ask Jeff what he thought about Mark’s deal. Jeff said that he was interested, but wanted to know what the long-term percentage would be. He would want at least 7.5% in royalties. Robert told him that he was going to make an offer along the same line of Marx, but Mark offered much more generous offer. Robert went out. Mark bold happy about that Kevin said that he was going to leave his offer exactly the way it is, because he didn’t feel the need to change it. Kevin said that he was immensely this is Disturbed at marks need to suck the life out of Jeff. Kevin said that Jeff had worked very hard, and Mark was trying to take it all the way. Kevin said that his offer would give Jeff enough money to focus on the Fire part of his deal comma which was what he was really passionate about. Mark laid out his deal again, and Kevin told Jeff that if he accepted that deal, he wanted a moment of silence for everything that died in the Shark Tank that day. Just accepted Mark’s offer, and Barbara told him that he made a good move.

HyConn Now in 2018 – The After Shark Tank Update 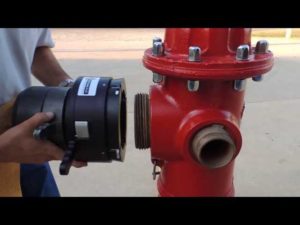 According to the entreprenuer’s Facebook page, the deal with Mark Cuban did not go through. Once it came down to signing the deal, Mark wanted to license out the design of the quick-connect hose attachment, which would null the part of the deal where Jeff would manage the company. Perhaps Jeff should have taken Kevin’s offer a little more seriously instead of being blinded by the idea of being a millionaire. The social media pages for this company hav not been touched since 2015, and it seems like this company was unable to make it on it’s own.