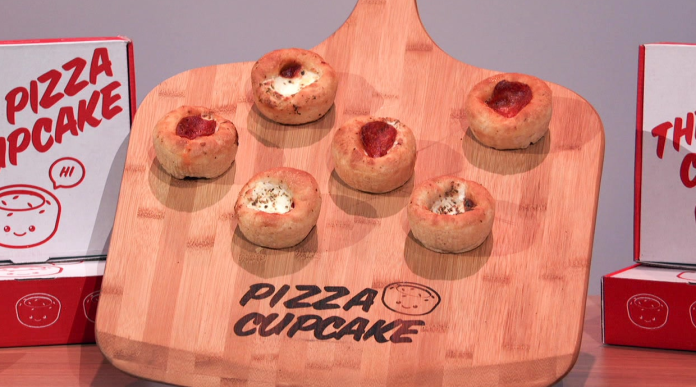 The Pizza Cupcake Before Shark Tank

The Pizza Cupcake is the brainchild of Andrea Meggiato and Michelle Jimenez-Meggiato. Both huge foodies, they had come up with the idea of making a cupcake-shaped snack after growing tired of working in Michelin-star restaurants. It took them a while but they eventually found the perfect combination of flavors—a hybrid of sourdough and brioche filled with tomato and mozzarella. They also added toppings such as zucchini, basil, oregano, mushrooms, and pepperoni.

Initially, they only shared the snack with family and friends. However, they received such an overwhelming response that they decided to turn it into a business. Thus, The Pizza Cupcake was born.

Quitting his full-time job, Andrea went straight to work. By 2019, they had landed a stadium concession opportunity at Citi Field. Not only that, but they also started to sell The Pizza Cupcake at an outdoor market, which attracted huge amounts of people. By the time December rolled around, they had sold more than 20,000 Pizza Cupcakes and had provided for multiple corporate holiday parties.

Unfortunately, with the COVID-19 pandemic, they were forced to shut down their pop-up locations but their sales remained strong as they continued to sell through eCommerce and local delivery. In March 2020, they also launched the Support NYC Initiative, which helps disadvantaged communities and health care workers with monetary donations.

And In January 2021, they received an opportunity of a lifetime—they would pitch their business to a panel of investors on Shark Tank.

They were later featured in the ninth episode of the twelfth season.

The Pizza Cupcake On Shark Tank

Andrea and Michelle walk hand-in-hand into the tank. Smiling, she introduces themselves to the sharks and lets them know that they’re seeking $125,000 for a 5% stake in their company, The Cupcake Pizza.

And right on cue, a giant cupcake pizza mascot walks out from behind the doors, which garners some laughs from the panel. Going straight into their pitch, Andrea explains that The Cupcake Pizza is a ‘next level of pizza’ that’s ‘easy to serve and made from high quality ingredients’. And as he says that, the camera zooms in on the samples next to them. He also emphasizes the fluffiness of their dough, which they’re incredibly proud of.

Michelle also highlights their small size, which makes them ‘perfect for any occasion.’

Eager to dig in, Robert asks the couple which one of the pizza cupcakes they should try. Andrea explains that they’ve given them their two best sellers: the margarita and the pepperoni. Lori wastes no time in taking a bite and right away, she seems impressed.

The rest of the sharks are equally impressed with how the pizza cupcakes taste. Robert even asks them ‘why it tastes so good’ and to that, and Daymond comments that there must be a lot of butter in the dough. Andrea shakes his head and reveals that there’s only olive oil, which surprises him. Explaining further, he tells them that the dough is a hybrid between a brioche and a sourdough, which gives the cupcakes a fluffy and crunchy texture.

Robert goes on to ask when they made the cupcakes as they ‘taste as if they were just made this morning’. Andrea surprises everyone by saying that it’s a frozen product. As Mark applauds the cupcakes again, Lori pokes fun at Kevin, who hasn’t said a word yet as he’s too busy eating.

As they continue to dig in, Michelle and Andrea reveal that each margarita cupcake is 160 calories and each pepperoni cupcake is 170 calories. Hand still holding onto one of the cupcakes, Robert demands to know how they had come up with the product.

Andrea explains that he was born and raised in Venice, Italy, and that he had worked in the kitchen as a chef since he was sixteen. He tells them that he eventually moved to London to learn English and that it was there that he worked for a fine Italian restaurant. He was later given the opportunity to move to New York to open up a new members club and that he had worked there for ten years before meeting Michelle.

Asked how they’d met, Michelle tells them that they had met through mutual friends and that he had asked her out on a pizza date. Not just any pizza date, but one where he would teach her how to make pizza.

Robert goes on to ask how they’d launched the business after making the product. Andrea explains that they had hosted an event for close friends and that everyone had loved the pizza cupcakes and that with Michelle’s expertise, they were able to turn it into a business.

Robert follows up by asking how they sell the products. Michelle explains that they currently sell straight to consumers but that they had worked with several distribution channels in the past including Citi Field, and Home of the Mets, which had actually approached them about the cupcakes.

Kevin finally finishes eating and asks them whether or not they use a commercial kitchen. Michelle replies yes and also tells him that they’ve been working with a co-packer for the past nine months, the same one that’s used by Bantam Bagels.

Next, Kevin asks about their sales for this year. Michelle states that they’re on track to make $800,000 in revenue this year and that they had made $340,000 last year. Continuing, she explains that they’ve done $77,000 so far year-to-date.

After some discussion about shipping, Robert asks about the price of the product. Michelle lets them know that a 12-pack goes for $24.99 with $9.99 shipping. Mark then asks about their manufacturing costs. Andrea says that one cupcake costs them 95 cents, which is on the expensive side as they make them by hand in their commercial kitchens. However, he emphasizes that the recipe that they have can be made with as low as 48 cents.

However, Kevin is worried about the potential shipping costs for the frozen product and for the reason, he drops out. Daymond follows suit, stating that he’s not the best shark to work with for the cupcakes. Robert does the same as he feels he won’t be able to give them a decent offer.

Lori, on the other hand, seems very interested, partly due to the success of Bantam Bagels. She goes on to make them an offer—$125,000 for a 20% stake in the company. As they’re contemplating her offer, Mark states that he’s also out due to shipping challenges with frozen products.

Stating that 20% is too high, Michelle goes on to make Lori a counteroffer—$125,000 for a 10% stake. However, she lets them know that her bottom line is 15%. Michelle and Andrea look at each other for a second before countering with 12.5%.

Lori refuses to budge, which prompts Michelle to counter with $150,000 for 15%. However, Lori states that she is unwilling to go any lower. Michelle goes on to say that they not only have a higher valuation than Bantam Bagels but that they also have better marketing.

Kevin warns them that they’re skating on thin ice as they only have one offer on the table.

Michelle then asks whether or not she can make one final counteroffer—$125,000 for 12.5% plus 2.5% in advisory shares. Lori finally agrees. She sends them an air shark hug and the pair leave the tank, happy about the deal that they managed to land.

The Pizza Cupcake After Shark Tank – Where Are They Now In 2022?

Since they appeared on Shark Tank, they’ve received an overwhelming amount of orders through their website.

The deal that they made with Lori has also been finalized. In October 2021, they successfully made their East Coast debut in more than 100 Wegman’s stores. Their products are also available at Plum Market and Foxtrot Market in the Midwest.

For Valentines Day 2022, they also teamed up with @cravingsbychrissyteigen on a limited edition of The Pizza Cupcake—one that’s topped with chili flakes and filled with fresh mozzarella.

For those who are interested, you can order the cupcakes directly from their official website. They currently offer three pack sizes: 1 box (12 pieces for $25.99), 2 boxes (24 pieces for $49.99), and 3 boxes (36 pieces for $69.99). And there are two flavors to choose from—Margherita and pepperoni (vegan and gluten-free options are in the works). You can either get them as a one-time purchase or you can subscribe, which will get you free shipping. For the latter, you can opt for delivery every 3 weeks, 5 weeks, or 8 weeks.

You can also follow them on social media. They have an Instagram account where they keep their followers updated with the latest promos as well as a Facebook page with over 8K followers. You can also check out some of the customer reviews on the latter (they currently have a 4.3-star rating out of 123 reviews). And if you have any questions, you can just send them a message through messenger. According to Facebook, they typically reply within a day.