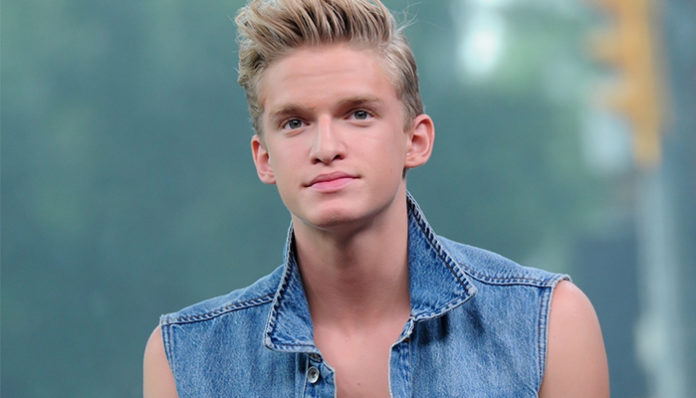 Former youtube singer, Cody Simpson rose to fame in the late 2000’s after being discovered by music producer, Shawn Campbell. Having always loved to sing, it’s not surprising that music played a huge part in Simpson’s life growing up. In his early teen years, he began to record and upload videos of himself singing various pop songs onto the online video platformーYoutube. Quickly gaining traction and popularity on the internet, Simpson’s account soon garnered thousands of subscribers, all of whom highly anticipated his next releases. Towards the end of 2009, the young artist received a breakthrough when he was featured on the popular Australian news program, The 7.30 Report. However despite his soaring online presence, it wasn’t until his musical talents were discovered by music producer, Shawn Campbell that he eventually embarked on a professional music career as a recording artist.

Soon after signing a contract with Atlantic Records, Simpson released his first professional record, an EP called 4 U. Proving to be a success, it was soon followed by a second EP entitled, Coast to Coast in 2011. Rising to universal recognition, he later released his debut studio album, Paradise in 2012. To date, the singer has released three full-length albums, sixteen singles and four extended plays; his best-performing single is that of iYiYi, which has since been certified Gold in both his native Australia and Canada. Talented beyond his age, Simpson has reaped in multiple awards during the short time which he’s spent in the music industry. Shortly after his debut as a professional artist, he won a Nickelodeon Australian Kids Choice Award for “Fresh Aussie Musos”; since then, he has also been honoured with a Breakthrough of the Year Award, two Kid’s Choice Awards, a MTV Europe Music Award, a Young Hollywood Award and a GQ Men of the Year Award, amongst several others.

A well-recognized teen idol, Simpson has starred in a number of television shows over the years including So Random! (2011), N.B.T (Next Big Thing) (2011), Bucket & Skinner’s Epic Adventures (2012), and Punk’d (2012). In 2012, he also took on the lead role in the comedy series, Finding Cody which also featured actresses Gatlin Green, Lia Marie Johnson and Alli Simpson. Later that same year, the artist also made his debut into reality TV on the culinary series, Cupcake Warsーwhere he acted as a guest judge. More recently in 2014, Simpson also showed off his dance moves as a contestant on the eighteenth season of ABC’s Dancing with the Stars.

So what has the former Youtube star been up to as of late? What are some of his latest projects? What happened to Cody Simpson? Where is he now in 2018? 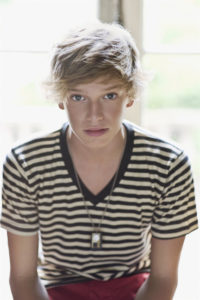 Born on January 11, 1997, in Gold Coast, Australia, Cody Robert Simpson is the son of Angie and Brad Simpson; he is the oldest out of three siblings, he has a younger sister named Alli and a younger brother named Tom. Growing up in the Southern hemisphere, Simpson was an avid athlete and loved to swim, in fact, it was not uncommon for the young boy to spend up to a few hours at a time training at the pool. Absorbed in the sport, he soon began training at the Miami Swimming Club under coach Ken and began to compete by the time he was ten years old. A champion swimmer, he brought home two gold medals at the Swimming Championships held in Queensland. Although competitive swimming is a thing of the past for the now 19-year old singer, he still remembers fondly of being at the pool.

Having said that however, swimming wasn’t the teen’s only hobbyーhe also loved to sing. When he was twelve years old, he started to record himself singing in his bedroom during the summer; he later started his own Youtube Channel to which he uploaded the videos to. Some of his first songs included Jason Mraz’s I’m Yours, Justin Timberlake’s Cry Me a River and The Jackson 5 classic, I Want You back. Quickly gaining momentum on the online platform, his subscribers count only increased with timeーit wasn’t long until his videos were regularly attracting thousands of viewers worldwide. Towards the end of 2009, Simpson rose to fame when his musical talents were featured on the Australian news show, The 7.30 Report. Soon afterwards, he was discovered by Grammy Award nominee Shawn Campbell, who helped the young artist launch his professional singing career. 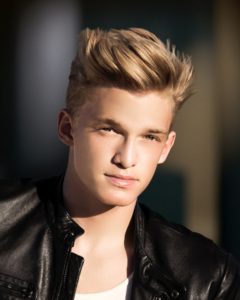 Eventually signing a recording contract with Atlantic Records, Simpson moved to Los Angeles to further his budding music career. After participating in the Camplified 2010 Tour with other fellow musicians, he released his first professional record, an EP entitled 4 U in December 2010. Containing mostly pop and R&B styled songs, the EP consisted of five tracksーfour of which were previously unreleased. Released on iTunes that holiday season, it eventually peaked at number four on the US Heatseekers Chart. Positively received, 4 U spawned two singles: iYiYi and All Day. Featuring American hip hop artist Flo Rida, iYiYi soon became a hit, peaking at number nineteen on the Australian Chart and achieving gold status.

A year after his debut into the music scene, Simpson released his second EP entitled, Coast to Coast in September 2011. Originally announced that July via Twitter, the EP boasted a track list of six songs, two of which were co-written by the singer. At the time of its release, Simpson was also performing on tour, singing on stage at various malls in the US. Successfully reaching the charts, Coast to Coast entered the US Billboard 200 Chart at number twelve and peaked at number sixteen on the Australian Albums Chart, selling close to 24,000 copies during the initial week of release. It later saw the release of three singlesーAngel, Not Just You and On My Mind.

Close to three years into his music career, Simpsons released his debut studio album, Paradise in September 2012, shortly after the release of his third EP, Preview to Paradise. Described by the artist to be “a representation of [himself]”, the album included ten R&B and pop inspired songs, one of which featured American Youtube singer, Becky G in the vocals. Fairly successful, Paradise reached number twenty-seven on the Billboard 200 and number thirty-one on the Australian Top Albums Chart; it also charted in various other countries including Canada, France, Ireland, Spain and Belgium. Favourably reviewed, two singles were eventually released from the album, Wish U Were Here and Got Me Good. The song, So Listen which featured T-Pain was also later released as a promotional single; it was uploaded onto Simpson’s Youtube page in March 2012.

In the summer of 2013, the recording artist released his second full-length album entitled Surfers Paradise. Named after a beach in Gold Coast, Australia called Surfers Paradise, the album was also Simpson’s last under Atlantic Records. Produced by a team consisting of Lucas Secon, Adam Messinger, DJ Frank, Nasri, amongst others, it debuted at number ten on the US Billboard 200, achieving more than 24,000 sales within the first week of release. Popular amongst younger audiences, Surfers Paradise also made the top ten in two other countersーin Canada where it peaked at number two and in New Zealand where it peaked at number nine.

His first album to ever to enter amongst the top ten in the Billboard 200, its eight-song track list also featured two vocal collaborations which he shared with Asher Roth and Ziggy Marley in Imma Be Cool and Love respectively. Surfers Paradise spawned three singles including La Da Dee, Summertime of Our Loves and Pretty Brown Eyes; a deluxe version of the album, which contained five additional songs, was also eventually released later that year. In support of Surfers Paradise, Simpson also embarked on a two-leg tour from May 2013 to January 2014, performing a total of forty-eight shows across North America.

After his split with Atlantic Records, the label which he had worked with since his debut, he formed his own independent label called Coast House. Simpson released his next studio album, Free in July 2015. Having wanted to create and record music free of outside influences and pressure, the independent album was the first record in which the singer had 100% creative control over its contents. Featuring live instrumentation, Free was produced by Cisco Adler and contained fourteen tracks including I’m Your Friend, Palm of Your Hand, Still Smiling, ABC and Happy Lil’ Hippie, amongst others. Similar to his preceding works, the album also included two collaboration songs, It Don’t Matter and Love Yourself which featured Donavon Frankenreiter and G. Love respectively. Warmly received amongst critics, it peaked at number four on the Folk Albums Chart and at number sixteen on the Top Rock Albums Chart in the US; it also reached number seventy-four in Simpson’s native Australia. A successful independent album, Free saw the release of two singlesーFlower and New Problems, the former of which featured artwork by popular singer, Miley Cyrus. 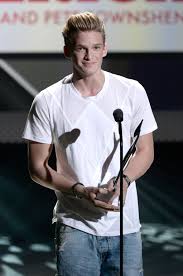 Returning to his roots of competitive swimming, Simpson recently had the opportunity of carrying the Olympic torch in Rio de Janeiro this summer alongside younger sister, Alli. In celebration of the 2016 Olympic games, which according to the star some of his previous teammates will be participating in, the artist was spotted wearing patriotic gold and green colors as they proudly made their way through the streets. Cherishing the once in a lifetime event, Simpson eventually gently handed the torch over to his sister while holding onto her hand, the two taking in the moment. In a later interview with Daily Mail Australia, the pop star confirmed that being able to run with the Olympic torch was indeed, “totally surreal.”

Sports aside, Simpson also gave a performance this September at the 2016 Giveathon Charity Fundraiser, held in his hometown of Queensland. For the event which took place on September 9, 2016, the singer was spotted boarding an Australia-bound plane, at the Los Angeles airport; also present at the fundraiser was acoustic singer, Fletcher Pilon of Australia’s Got Talent fame. Keeping a busy schedule, social activist Simpson also later headed off to New York City to give an environmental speech at the United Nations Environmental Program’s annual Social Good Summit. Calm and confident on the stage, the singer was nothing short of relaxed as he spoke on about various issues surrounding climate change and ocean preservation. No stranger to the UN, Simpson has been involved with the organization for close to a year.

Are you a fan of the former Youtube singer? Want to stay connected and up-to-date with the stars news and updates? You can easily accomplish all of the above by following Cody Simpson’s on social mediaーyou can find him active on Twitter (@CodySimpson) as well as on Instagram (@Codysimpson). Don’t forget to also check out his official website as well!