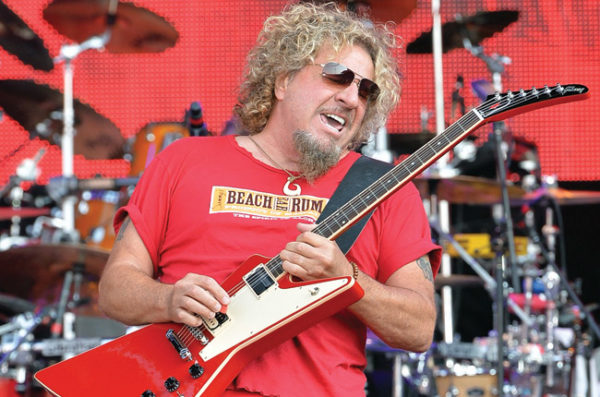 Known as the Red Rocker, Sammy Hagar has climbed into the pilot seat of many a rock band and helped guide them to stardom. Whether it be with Van Halen in the mid 1980’s or more recently Chickenfoot and The Circle, Hagar has brought with him plenty of experience and chart toppers. But what has he been up to in recent years? Here, we take a look at what Sammy Hagar is doing now in 2018.

Born Samuel Roy Hagar on October 13, 1947, Sammy was the son of a Lebanese Steel Worker and a stay at home mother in Salinas, California. Hagar has commented that due to his father’s alcoholism and tendencies towards boxing, life was not what one could consider easy, and he had to grow up quickly. As a result of such stress, he would seek outlets for stress in first boxing, but later rock music.

By the age of 20, he would begin his path to glory with his first band, The Fabulous Castilles. While not so fabulous as to get a record deal, this band would allow him to start on his own duo project in Samson and Hagar, which would see a debut release of two singles through the Ranwood Records label, “Read My Thoughts” and “Reach Out To Find Me”. Hagar would not hang around to create another single however, as within the 6 years leading up to him joining his first truly successful band, Montrose, he would join or help found seven other bands.

in 1973, the founding of Montrose would also kick off Hagar’s career in a major fashion, contributing to two full release albums, as well as writing the song “Bad Motor Scooter”. However, at this point in a fashion to be expected of him, he would leave the band within two years, spending the next 8 years working primarily as a solo artist.

Rise of the Red Rocker

On his own, Hagar would find a greater sense of stability. Signing onto Capitol Records, he would go on to make several albums, most notably “Standing Hampton”,“Three Lock Box” which generated his first Top 40 breakout, and after a quick stint with H.S.A.S., “V.O.A.”. All of these would end up reaching at least gold album status in very short order. Also during this time, the hit “Red” would be released, and would lend to his nickname, “The Red Rocker”.

In 1983, he would come to join yet another band, H.S.A.S. (named from the first letter of each of the members last names) as a short term project. The group would run a small charity tour and release one album, “Through the Fire” which produced a few underground hits such as “Top of the Rock” and “A Whiter Shade of Pale”.

After the 1984 release of his “V.O.A.” album which featured the hit single “I Can’t Drive 55”, Hagar would soon be tapped to join Van Halen as a replacement for David Lee Roth, who quit the band due to personal issues primarily with Eddie Van Halen. This would turn out to be a sign of things to come for both Hagar and Van Halen, as despite lasting over a decade together, egos would clash significantly. On the outside, Hagar’s joining of Van Halen seemed a godsend, as four albums would gain massive popularity both for the band and Hagar, including the “For Unlawful Carnal Knowledge”, which not only went triple platinum, but also won a Grammy for Best Hard Rock Performance in 1991. Behind the scenes though, disagreements on record releases (especially that of the upcoming “Greatest Hits”), and medical issues between Eddie and Alex Van Halen as well as Hagar’s then pregnant wife would push the group to breaking point, with both pointing the finger at the other as to who caused the split.

Taking former Van Halen bassist Michael Anthony in tow, Hagar would leave Van Halen to put more time into his side project, Los Tres Gusanos, which had been more or less around since 1992. While not releasing any official albums during this time, the group would appear fairly frequently at Hagar’s own Catina, Cabo Wabo (which is also the name of a tequila brand formerly owned by Hagar). Never formally disbanding, it is quite common for an impromptu reunion of the band even to this day.

In 1996, Sammy Hagar would form yet another band, Sammy Hagar and the Waboritas which would gain a few hits, most notably “Little White Lie” in 1997. By 2003, some manner of amicability had returned between Hagar and Van Halen, where alongside Roth, he would go on tour with the band once more. A new album for Van Halen, titled “Best of Both Worlds” would be released during this time, and band mates would rotate from Van Halen to the Waboritas and back seamlessly. The Waboritas still have some play time every now and again, even in 2016.

Other projects which have continued to this day for Hagar have been the supergroup Chickenfoot (including both the guitarist and drummer from the Red Hot Chili Peppers), as well as The Circle, which founded in 2014 appear to be his current main project. In 2015, a record was released by The Circle titled “At Your Service”, with a follow up record to occur in the near future. With current recordings also comes bookings stretching out all the way to the Rock Legends Cruise in 2018. It would seem that Hagar hasn’t slowed down a bit, also finding time to recently attend David Grohl’s “All-Star Charity Gig” in his own Cabo Wabo, as well as releasing a “Cooking and Partying Handbook” called Are We Having Fun Yet. It would seem that Sammy Hagar is going strong into his 4th decade in music and the Rock lifestyle, and has absolutely no intention of stopping.