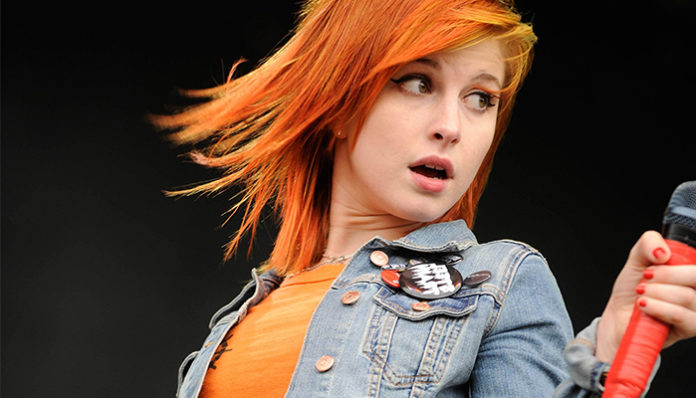 Hayley Williams is an American singer who is best known for being the lead vocalist of the rock band, Paramore. A talented pianist and guitar player, music had always played a large part in her life growing up; by the time she was fourteen, she was already writing her own songs. While she was still a student at her local high school in Tennessee, Williams met eventual band members Zac and Josh Farro, both of whom she soon befriended; she later crossed paths with bassist Jeremy Davis after trying out for a local funk band. Eventually coming together, the group of friends established their own band called Paramore in 2004, with Williams taking on the role of lead vocalist. After signing with Fueled by Ramen, a recording label owned by the Warner Music Group, they released their debut album entitled, All We Know is Falling  in 2005.

Since the band first came together in the early 2000’s, Paramore has released four studio albums, eighteen singles and twenty two music videos; to date, their most popular album is that of their 2x Platinum certified breakthrough, Riot! (2007). As a group, Paramore has won eleven Teen Choice Awards, three NME Awards and a prestigious Grammy Award from four separate nominations. Quickly achieving mainstream recognition with her band, Williams’s popularity as a vocal artist only increased with time. Known for her charismatic soprano voice, the singer has garnered numerous awards for herself over the years including four MTV Video Music Awards, five Karrang Readers’ Poll Awards, two People’s Choice Awards as well as a Billboard Women in Music Award. A three-time Grammy Award nominee, Williams has also garnered two BET Award nominations, and an iHeartRadio Music Award.

Perhaps one of the best known songs that Williams has sang is that of Decodeーa piece which was used as the theme to the romance film, Twilight. A brilliant songwriter, the artist has written and provided the soundtracks to a number of popular television series including NCIS (2008), Glee (2010), Radio 1’s Big Weekend (2010), Transformers: Dark Side of the Moon (2011) and The Voice Kids (2014), to name a few. Although television isn’t her main element per say, Williams has made her fair share of appearances on the screen in a variety of shows such as Mad & The City (2009), Big Morning Buzz Live (2013), Talking Dead (2013) and E! News (2014).

But what has the rock star been up to these past couple of years? Has she recorded anything with her band as of late? What happened to Hayley Williams from Paramore? Where is she now in 2018?

Hayley Williams’ Childhood and Eventual Start in Music with Paramore 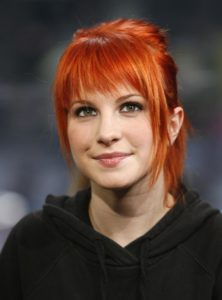 Born on December 27, 1988, in Meridian, Mississippi, Hayley Nichole Williams is the daughter of Cristi and Joey Williams; she has a younger sister and two half-siblings from her dad’s eventual remarriage. When Williams was seven years old, her parents divorced; she went to live with her mom after the split, although she did also visit her father on a regular basis. In fact, she spent almost every other weekend playing video games at her dad’s since her mother had forbid game-playing in the house. When she was in her teens, Williams moved to Tennessee from her native city of Meridian with her motherーWilliams’ ex-stepfather had been abusive. Although the two later returned to Mississippi briefly, they eventually moved back to Tennessee; eventually settling down, Williams soon became a student at a local high school.

It was during this time that Williams met the Farro brothers, Josh and Zac; she quickly befriended them in school. Having always been interested in music, she later decided to take voice lessons with Brett Manning not long after the start of classes. Gaining confidence in her vocal abilities, Williams eventually tried out for a local funk band known as The Factory; it was at the try outs that she met Jeremy Davis, a bassist. Realizing their mutual love in music, Williams introduced Davis to her friends Zac and Josh and the group ultimately formed their own rock band, Paramore in 2004. After much songwriting and perseverance, they landed a recording contract with Fueled by Ramen in 2005.

Hayley Williams’ Musical Career with Paramore Throughout the Years 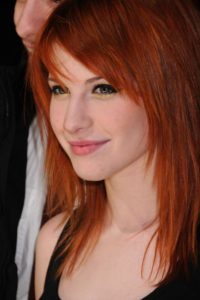 In the summer of 2005, Paramore released their debut album, All We Know is Falling with the Atlantic-distributed label. Produced by a team consisting of Mike Green, Nick Trevisick, Roger Alan Nichols, and James Paul Wisner, the album was recorded in Orlando, Florida after the departure of original bassist Jeremy Davis. Featuring that as a theme, All We Know is Falling consisted of ten tracks (all of the lyrics written by Williams) including All We Know, Here We Go Again, Never Let This Go and Franklin. Although some criticized the songs for being “too straightforward”, the album was met with generally positive reviews; it currently holds a four star rating form critics at Alternative Press. Included in Buzzfeed’s list of “36 Pop Punk Albums You Need To Hear Before You Die”, All We Know is Falling saw the release of three singles: Pressure, Emergency and All We Know, although none of them managed to reach the US charts.

Two years after their initial effort, Paramore released their second album entitled, Riot! in June 2007. The band’s best-performing album to date, it explored a “diverse range of styles” and was compared by a couple of critics to the sounds of Avril Lavigne and Kelly Clarkson. Much more successful than their debut work, it peaked at number two on the Top Alternative Albums Chart, at number four on the Top Rock Albums and at number fifteen on the Billboard 200 in the United States; a hit overseas, it also reached the charts in Australia, Ireland, Mexico, New Zealand and Austria. Praised for its consistent songs and catchy lyrics, the track list of Riot! showcased eleven alternative rock songs, four of which were co-written by Josh Farro. Very much a success, the album has been featured in several publications including Rock Sound’s lists of “51 Most Essential Pop Albums of All Time” and “101 Modern Classics.” Williams’s first multi-platinum record with Paramore, the group also went on a North America tour to promote the album shortly after its release. At present, over two million copies of the album have been sold in the US alone.

Following the success of Riot!, Paramore released a third studio album, Brand New Eyes in September 2009. Written wholly by Williams and Farro, the album was recorded at a studio in Hidden Hills and produced by Rob Cavallo. Noted for its maturity and improved songwriting compared to the band’s earlier works, Brand New Eyes entered the US Billboard 200 at number two and made well over 180,000 sales during the initial week of release. Their best-performing album on the charts, it later went on to become a chart-topper in multiple other countries across the globe including Ireland, Australia, New Zealand and the UK. The final album which featured Zac and Josh Farro before their departure from Paramore, it contained eleven different songs, five of which were eventually released as singles (e.g. Playing God, Brick by Boring Brick, Careful, The Only Exception, and Ignorance). Given a perfect give out of five rating from Big Cheese Magazine, it also prompted the bandmates to go on a World Tour, which sent them as far as the Caribbean’s! A major hit, Brand New Eyes won the band a Grammy Award nomination and a win at the 2010 Kerrang! Awards.

The group didn’t release their next full length album until the spring of 2013ーself-titled Paramore, it was the band’s first release since the departure of cofounders Zac and Josh Farro. Described by the artists to be “a reintroduction of the band to the world and to themselves”, the album incorporated multiple new music genres into its sounds including that of funk rock and new wave. Commended for its musical experimentation, Paramore was another big success for the band, having debuted at the top of the US Billboard 200 chart and selling over 106,000 copies during the first week. A deluxe version of Paramore, which included several live tracks, was released the following year in November 2014.

Besides being a best-seller in the United States, it also reached number one in Australia, Ireland, New Zealand, Australia and Argentina. Universally acclaimed, the album was cited to be “the best music Paramore have ever created”; it received a deserving four and a half stars from Allmusic and a perfect score from Alternative Press. Following the release of Paramore, the band also embarked on The Self-Titled Tour, which began in Europe and eventually ended in May 2015 after close to two hundred shows. Four hit singles were produced from the album: Still Into You, Daydreaming, Now and Ain’t It Funー which won a Grammy Award for “Best Rock Song” at the 75th annual ceremony. Paramore’s fourth RIAA certified album in a row, it has since sold over 2.5 million copies across the globe, one million of them being in the US. 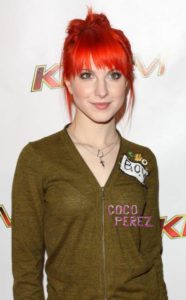 Although Williams and the rest of her Paramore bandmates haven’t released any new music lately, the singer’s not out of the headlines just yet. This February, the rock singer tied the knot with longtime partner and fellow musician Chad Gilbert at Nashville’s Franklin Theater. The pair first began their relationship in 2008 and eventually became engaged in December of 2014. Heavily in love, the lovebirds were seen exchanging their vows in front of an intimate group of around fifty guests. While Williams donned a beautiful white Vera Wang wedding dressed, the groom sported an all-black suit with a red and black Ben Sherman shirt underneath. After the event, multiple photos from the wedding surfaced online on various social media platformsーmany of which were taken by fans, who were lucky enough to witness the ceremony!

Just a month after the nuptial, the lead vocalist of Paramore announced that she was going to be starting her own hair dye companyーsomething which really isn’t that high on the shocking scale considering Williams’ signature colourful locks. Four years in the making, the goodDYEyoung brand as it is called, has released a line of hair dyes that is not only cruelty-free but also extremely affordable. At $13.99 a bottle, it definitely won’t be breaking the bank! As part of its initial release, five shades of color have been released, ranging from blues to yellows.

Looking for a way to stay connected with the singer of Paramore fame? Why not follow Hayley Williams’ growing online presence on social media? You can find the rock star on Twitter (@yelyahwilliams) as well as on Instagram (@yelyahwilliams). While you’re at it, it might also be a good idea to check out her official Facebook page for some of her latest news!