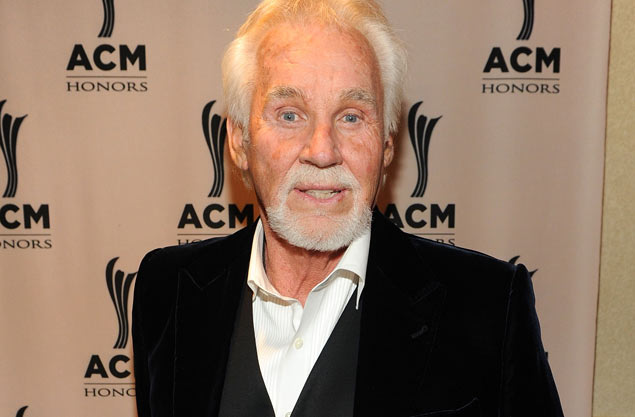 Kenny Rogers is the man behind many timeless hits like “Lady”, “She Believes in Me”, and “Lucille”. He is also an established actor with the highly-popular Gambler series of films. Throughout his career of around five decades Rogers released more than 30 studio albums and has raked in numerous awards and accolades.

Before we check out the latest regarding the Gambler, let’s first take a look at his journey to musical success.

Born on August 21, 1938, Kenneth Ray Rogers grew up to a challenging childhood in a federal housing project in Houston, Texas, with seven siblings. His earliest exposure to music was from his mother’s records of singers like Merle Haggard and Johnny Cash. In his teenage years Rogers attended Jefferson Davis High School and there he developed his love for music. He formed a band with his friends called The Scholars and Rogers admitted that they did it just to meet girls. After the first taste of a paid gig, The Scholars decided to take the band business a lot more seriously.

The Scholars went on tours around Texas, usually in Air Force bases, and they gained a good amount of local fame. The boys broke up after high school and Rogers tried his hand in going solo with the release of his first single “That Crazy Feeling” in 1958, and he performed it on the television show American Bandstand. Unfortunately this wasn’t yet the time for him to be a star.

At his early 20’s Rogers joined the Bobby Doyle Three, a jazz group where he played the bass guitar. They performed everyday in a club for eight hours and eventually attracted famous singers like Tony Bennett to sing with them. Rogers was still part of the band when they released the album In a Most Unusual Way in 1962 before breaking up three years later. Rogers again tried to go solo with another single “Here’s That Rainy Day” but it only fizzled.

In 1966 Rogers hopped aboard the folk band The New Christy Minstrels, and this time he held the microphone aside from the double bass. Rogers and a couple of other members were unsatisfied with the group in the long run so they decided to split from it and form their own band The First Edition. They fused together different genres and spawned a good number of chart-topping singles, studio albums, and even had their own variety show Rollin’ On the River in their almost a decade-long career. They went on their separate ways in 1974.

For the third time Rogers attempted his luck on a solo career. He inked a recording contract with the label United Artists and released his debut album Love Lifted Me in 1976 which only gathered minor success. The following year was his career’s breakthrough with the chart-topping single “Lucille” in his second eponymous album. The song won Rogers the “Song of the Year” award during the 1977 Country Music Association Awards, and it solidified his name in the music scene. Rogers ended the decade with a string of successful albums namely Daytime Friends (1977), Love or Something Like It (1978), The Gambler (1978), and Kenny (1979). He also had two duet albums with country singer Dottie West titled Every Time Two Fools Collide (1978) and Classics (1979); both sold millions of copies and were chart toppers. 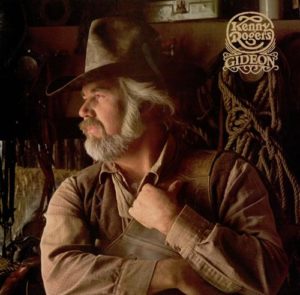 Rogers opened the 80’s with the album Gideon which topped the Country chart of Billboard and its Canadian counterpart RPM. During the same year he collaborated with the legendary Lionel Richie in the production of the single “Lady” and the 1981 album Share Your Love, and both were immensely successful. He also teamed up with Bee Gees member Barry Gibb for Eyes That See in the Dark released in 1983 and one of its singles was the award-winning “Islands in the Stream” which was a duet with Dolly Parton. Rogers roared through the 80’s with several more albums and singles that did well in the country charts.

The 90’s did not fare well for Rogers as his first album for the decade Love Is Strange only peaked at the 21st spot of the charts. His 1991 album Back Home Again slumped at number 42. Things turned for the worse when his next album If Only My Heart Had A Voice (1993) did not even chart, not to mention receiving negative critical reception. His 1994 offering Timepiece also did not find a spot in the charts. Rogers returned to the charts in 1996 with the holiday album The Gift at number 10, followed by two more albums that reached considerable positions yet were given lukewarm reviews.

It was also in 1991 when Rogers started his famous restaurant Kenny Rogers Roasters in collaboration with former governor of Kentucky John Y. Brown, Jr. The restaurant surged in popularity which led to a worldwide expansion. After filing for bankruptcy in 1998 the restaurant underwent several changes in ownership which led to the closure of many of its branches in the West. Nowadays the restaurant is still quite popular in several Asian countries and will be opening its first branch in India in 2016.

Rogers only had three country albums in the new millennium namely There You Go Again (2000), Back to the Well (2003), and Water & Bridges (2006). He ventured in gospel music with his two albums The Love of God (2011) and Amazing Grace (2012). His latest original work You Can’t Make Old Friends (2013) again featured Dolly Parton for the title track and peaked at number nine on the country charts.

Rogers had his share of acting during the early parts of his solo music career. He debuted in the 1973 television special Saga of Sonora along with The First Edition as the balladeers. Two years later he appeared in the drama film The Dream Makers.

Perhaps his most renowned acting work is in the series of western films as inspired by his single “The Gambler”. The first film was Kenny Rogers as The Gambler which aired in 1980 and it earned Rogers an Eddie Award for the “Best Edited Television Special” category. Four more films followed afterwards and the series ended in 1994. A three-part novelization based on the film was released as written by author Caleb Pirtle III.

Rogers hosted the 1992 documentary The Real West which won a Bronze Wrangler award during the 1994 Western Heritage Awards. In 1995 Rogers starred alongside Michelle Lee in the autobiographical film Big Dreams & Broken Hearts: The Dottie West Story, and two years later he appeared in Get to the Heart: The Barbara Mandrell Story.

Let’s see what Kenny Rogers is up to now this year.

In 2011 Rogers was asked if he wanted a sixth Gambler film. He did describe some of the supposed scenes for the said film but it seems that any possibility of that taking fruition has been squashed by Rogers’ announcement in 2015 that he will be retiring from music and acting to focus on his family. During the same year he released a holiday album titled Once Again It’s Christmas. 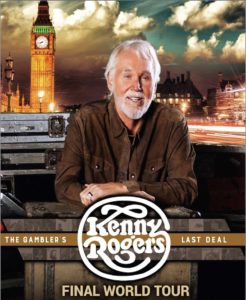 Rogers is currently on his “The Gambler’s Last Deal” tour which will be the last before his imminent retirement. He will be performing in a few European countries in November before hopping to different states in the Yuletide season. The gambler’s final performance will be on April 08, 2017, at Danville, Kentucky.

If you’re on the hunt for ticket packages that contain a handful of freebies then head to Future Beat to avail some of the goodies for his upcoming tour schedules.