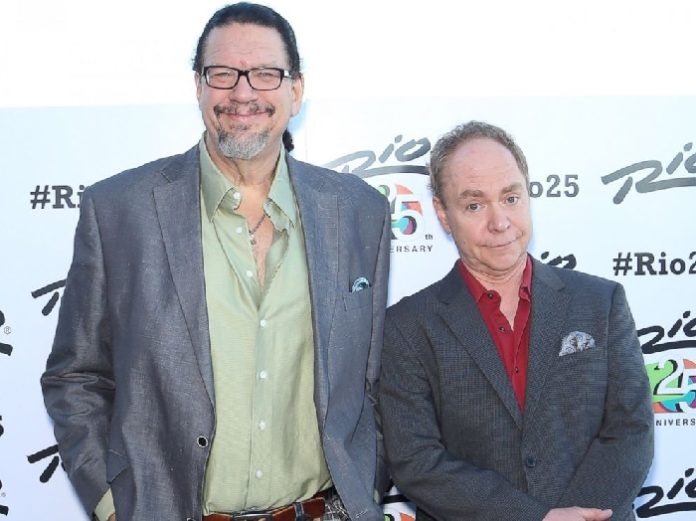 Since the early 1970’s Penn Jillette and Teller have been a successful double act that have amused audiences sometimes, and shocked them at others, but eventually they have amazed us all with their impressive magical tricks, that they insist contain no real magic at all. Their long-running TV show ‘Penn & Teller : Bullshit!’ has helped us to separate reality from, well bullshit, and they have built the kind of cult following that many magicians long to have, all without any pretensions to the occult or other devices intended to create an air of mystery about them. But what’s the history behind their success? How have they managed to stay at the top of celebrity magic for so long? And perhaps most importantly of all, why has Penn got a red fingernail on his left hand? Read on to find out the answers to these questions, and discover what makes their partnership quite so uniquely magical.

Teller is the older of the pair, he was born Raymond Joseph Teller on February 14th 1948 in Philadelphia, Pennsylvania but later changed his name to just ‘Teller’ legally. He graduated from Amherst College in 1969, with a Bachelor of Arts degree in classical studies, and initially chose a far more mundane career than performing on the stage. He became an English and Latin teacher at Lawrence High School in Lawrenceville, New Jersey and eventually stayed at the school for six years, passing on his passion for knowledge.

Penn Fraser Jillette was born in Greenfield, Massachusetts on March 5th, 1955. He was brought up as a practising Christian, but became an athiest early in life after reading the Bible and realising he didn’t believe any of it reflected real events. Not long after that, when he was barely in his teens, he was asked to leave his Church, due to his tendency to raise doubts about religion that severely tested the faith of his peers. Although he was a fan of magic from an early age, his down-to-earth personality found traditional magic acts tiresome, due to their presentation of the illusions as genuinely paranormal. At eighteen he saw a show by the enormously talented magician James Randi, who has since become one of the most celebrated skeptical minds of our time, and Randi’s no nonsense approach to magic, and his open acknowledgement that magic was nothing more than skill and misdirection, rather than mysterious powers, inspired the young Penn to pursue his own path in the performing arts along similar lines.

After Penn had graduated from high school in 1974, he went to the Barnum & Bailey Clown Circus, and graduated from there a year later, having developed a reasonably professional stage persona. It was at this time that he met Teller, through a mutual friend of them both, one Weir Chrisemer. Teller had by this time tired of his teaching career, but he had also discovered a desire to perform on the stage during his years as the center of attention in the classroom, and he eagerly accepted Chrisemer’s invitation to form a performing trio along with Penn Jillette, and with that the ‘Asparagus Valley Cultural Society’ was born.

The trio of performers made their debut on August 19th 1975 at the Minnesota Renaissance Festival and used a blend of music, vaudeville and various circus skills to create an unusual, and occasionally surreal stage show that quickly gained a fair amount of critical acclaim. By 1977 they had a regular slot at the Walnut Street Theater in Philadelphia, as well as occasional guest appearances on TV shows. During periods without regular bookings they would take their show on the road, touring in Minneapolis, Atlanta and Philadelphia on a regular basis. As time went by they became ever more popular with audiences that had seen the Asparagus Valley Cultural Society show before. Their occasional juvenile humor created false expectations for many audiences, who were frequently surprised by the admirable intellectual capacities of all three performers. In 1979 they finally began performing their own show at the Phoenix Theater in San Francisco’s North Beach. The show was entitled ‘Asparagus, The Amazing Comedy of Theatrical Surprises ‘, and more than a few critics expressed surprise at quite how good the strangely named show actually was. Ultimately it was good enough to run at the Phoenix theater for another three years.

Weir Chrisemer quit show-business in 1981 and Penn and Teller went on to continue performing as a double-act together, and the dynamic between the two was tangible. Soon their performances began to be heaped with critical praise. By 1985 they were thrilling audiences with their Off Broadway show, that was comprised of comedy, magic, music and real theater. The duo excelled on the stage and despite their insistence that all of their tricks were nothing more than sleight of hand, audiences still found the pairing magical, if only because of the strange combination of the huge and confident Penn, standing six and a half feet tall, and the mysteriously silent Teller, who seemed almost tiny by comparison, although he is of average height. They insisted that they were not magicians, but audiences still found their partnership magical. By 1987 they had made it to Broadway, and in the same year appeared in Run-DMC’s video for ‘It’s Tricky’, Penn and Teller were quickly becoming well-respected, and well-known entertainers.

The 1990’s brought even more success for the pair. In between performing in their own shows, they also made frequent guest appearances on TV shows such as Saturday Night Live, Late Night with David Letterman, and Late Night with Conan O’Brien, as well as The Tonight Show with Jay Leno. They still toured successfully across the country and took part in more conventional celebrity activities, making several guest appearances on a variety of shows, including Hollywood Squares and The Bernie Mac Show, but they also showed their talents extended to serious acting too, with the occasional well received appearance on heavyweight dramas such as ‘The West Wing’.

From 2003 Penn and Teller hosted the show for which they will perhaps be best remembered, the provocatively named ‘Penn & Teller : Bullshit’. It wasn’t just the name that invoked strong feelings, this was no variety show, and it had a far more serious focus than mere entertainment. Although it was presented with Penn’s usual direct, entertaining, and occasionally blunt confidence, and was also a vehicle for plenty of Teller’s trademark non-visual comedy, it was entirely intellectual at its heart. Generally each episode would either explore a political topic, or aim to debunk a pseudo-scientific or paranormal belief system. Under the focused glare of the duo’s down-to-earth skepticism, there were few fads, conspiracy theories or misconceptions that survived the hard light of reality and logical thinking that they subjected it too, and the public loved it.

The show eventually ran for seven years, until 2010, and during that time Penn and Teller dealt with such weighty subjects as gun control, religion, psychics, PETA, environmental issues and weight loss. They upset many people, but there were few that could really deny their logic on most occasions. Although the pair are both confirmed teetotallers, and have expressed their own lack of interest in any form of personal recreational drug use, their libertarian attitudes were clear to see in the episode dealing with the war on drugs. Bullshit contained a good deal more profanity than was usual for a show that dealt with political or social matters, but as Penn explained, if he called someone a scam-artist or a con-man, he would be liable to get sued eventually, if he called them a bullshitter or an asshole, the chance of a lawsuit was greatly reduced, and of course it all made for great TV.

What are Penn & Teller Doing Now in 2018 – Recent Updates

The legacy of Bullshit to many of its viewers, has been to install a greater ability to question Government actions, test unproven theories and cast a dubious eye over outlandish theories, but the show has not been without it’s critics too. Some elements of the press has taken exception to what they see as the shows one-sided itinerary, pointing out that the show and its hosts are rarely neutral on a subject, and often steer an issue to the conclusion that they wish to end up with. But despite the negativity that Bullshit elicited from some quarters, the show received an award from the Independent Investigations Group in 2008, for its contribution to public understanding of scientific skepticism and rational thinking. The show also received an accolade from the Writers Guild of America, recognizing the excellence of its writing, and in addition the show was nominated for thirteen Emmy Awards, five Writers Guild of America Awards and another Directors Guild of America Award.

In April 2013, Penn and Teller received their own star on the Hollywood Walk of Fame in recognition of their Live performances in the partnership that has lasted for over 35 years, and since then they have continued to work together and individually on a variety of projects. There have been guest appearances on a wide variety of shows, from the Celebrity Apprentice to Whose Line is it Anyway.

Teller has directed a feature film, ‘Tim’s Vermeer’, which was released in 2014, and in which he and Penn both acted as executive producers, and he continues to produce screenplays today in 2016.

As for Penn Jillette, in 2016 he has perhaps performed the greatest magic trick of his career, by suddenly becoming half the man he used to be. He details the story of his incredible weight loss, which apparently took place over just 100 days, in his new book, entitled ‘Presto! : How I made Over 100 Pounds Disappear and Other Magical Tales’, published earlier in 2016. Despite the odd disgruntled conspiracy theorist remarking that Penn looks gaunt and haggard, the truth is that he has never really been healthier than he is today, the new slim line Penn is healthy, now we just have to get used to it.

And just to round things off, keeping fully in the spirit of Penn and Teller, lets just clear up probably the biggest real mystery about each of them. That red painted fingernail of Penn’s isn’t there to invoke a sense of magical mystery, he revealed in a tweet in April 2013 that it’s simply his way of honoring the memory of his mom, and the most asked question about Teller is always ‘Does he ever speak?’, well apparently he does, and if you spend a few minutes online, you should soon be able to find a few clips of one of his occasional speeches. He’s got a nice voice, but it’s not particularly mysterious at all.