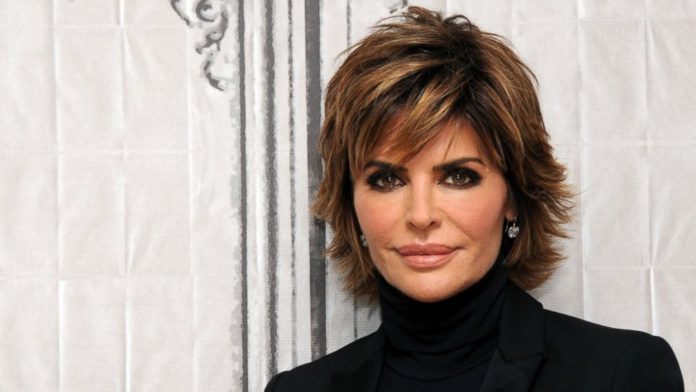 Lisa Rinna is an American actress who is best known for her role in the soap opera, Days of Our Lives. Growing up, acting wasn’t something that flooded her mind; in fact, Rinna was much more interested in posing than filming in front of the camera. Chasing her dreams of becoming a fashion model, she soon found modelling work in San Francisco after graduating from high school in 1981. It wasn’t until she was in her twenties in the mid to late 80’s that she first became interested in pursing an acting career. Eventually auditioning for and securing multiple commercial gigs, she made her first appearance on a television advertisement in 1987. Not too long after that, Rinna made her on-screen debut in the 1988 action film, Captive Rage. A couple of years later, Rinna received a break when she was offered a recurring role in the family comedy, Valerie’s Family: The Hogans.

Steadily making a name for herself in the industry, the actress began appearing in various television films and series throughout the early 90’s. Some of her credits from this period include Monday Morning (1990), Lies Before Kisses (1991), Shades of LA (1991), and Baywatch (1991). A few years after her debut, Rinna reached a turning point in her career when she was cast as a regular cast member in the NBC daytime soap opera, Days of Our Lives (1992)ーit remains to be one of her best-known portrayals to this date. For her performance in the series, Rinna also won two Soap Opera Digest awards; one for the category of “Outstanding Female Newcomer” in 1994 and another for the category of “Hottest Soap Couple”, which is shared with actor Robert Kelker Kelly.

Besides being a celebrated actress, Rinna is also an award-winning talk show host. Perhaps she is most recognized for her role as host on the SOAPnet television talk show, Soap Talkーone which garnered her four Daytime Emmy Award nominations for “Outsanding Talk Show Host” throughout the 2000’s. After her time on Soap Talk, Rinna tackled the world of reality television by taking part in the dancing competition series, Dancing with the Stars. A contestant on the second season of the series, she was coupled with professional dancer Louis van Amstel, although the pair were later eliminated via audience voting in the seventh round. In 2011, Rinna also took part in the popular game show, The Celebrity Apprentice however was ultimately fired during task two.

So what has the former Soap Talk host been up to since then? What has she been working on these past few years? What happened to Lisa Rinna? Where is she now in 2018? 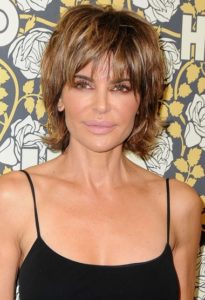 Born on July 11, 1963, in Newport Beach, California, Lisa De Anne Rinna is the daughter of Frank and Lois Rinna. Growing up in the city of Medford, Oregon, she had two older step-sisters from her father’s previous marriage, however tragically, one of them eventually passed away from a drug overdose at the age of twenty-one when Rinna was only six years old. Although she was often described as a drama queen, she was much more interested in modelling than acting as a teen. A student at Medford Senior High School during the late 70’s and early 80’s, Rinna was an active member of the school cheerleading team and was in fact known for having the skinniest legs in the group.

After her high school graduation in 1981, Rinna attended the University of Oregon with plans to study drama however was ultimately not accepted into the advanced acting class which she’d hoped to join. Disheartened by the turn of events, she soon dropped out of college after a year and stopped all of her involvement in acting for four years. During that period, Rinna lived in Beaverton with her half-sister Nancy and worked as a model for Nike, often appearing in several local conventions. Pursuing further job opportunities, she later moved to San Francisco and Japan briefly to work as a model. Eventually gravitating back towards acting, she relocated to the bustling city of Los Angeles to enrol once again in acting classes. After the completion of her training, she landed
multiple commercial gigs on television prior to making her debut in the 1988 action film, Captive Rage at the age of twenty five. 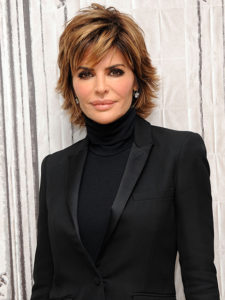 Two years after breaking out into the entertainment industry as an actress, Rinna received a recurring role in the NBC series, The Hogan Family (1990). Originally broadcasted in March 1986, the sitcom revolved around the life of Valerie Harper, a working mom who struggles to balance her time between work and raising her three sons, as her husband is often absent from the home due to his job as an airline pilot. A hit upon its release, The Hogan Family enjoyed a star studded cast which included Valerie Harper, Jason Bateman, Christine Ebersole, Josh Taylor, Judith Kahan, Edie McClurg, amongst many others. In the show, Rinna played the role of Annie Derrick, a guest character who appeared for four episodes during the sitcom’s fifth season; although it was a small part, it marked the actress’ first time being on a television series.

From there, Rinna appeared in a handful of minor roles before landing a breakthrough role as a series regular in the NBC soap opera, Days of Our Lives. One of the longest-running television programs across the globe, it has been airing almost every weekday since it first premiered in November 1956; still running to this date, it is currently close to the 13,000 episode mark. Considered by many to be a TV classic, Days of Our Lives revolves around the lives, journeys and adventures of those living in the fictional city called Salem. Throughout its multi-decade run, the soap has seen countless awardsーPeople’s Choice Awards, Daytime Emmy Awards, Young Artist Awards, PRISM Awards, you name it. A fan favourite amongst viewers from all around the world, it has been syndicated to multiple countries worldwide. In Days of Our Lives, Rinna played the part of Billie Reed, a character who first made her debut in the first season of the show in 1991; she has since appeared in close to three hundred episodes. Although her last appearance in the series was back in 2013, it is regarded by numerous fans to be her best role to date. 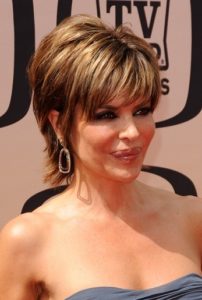 Rising in prominence from her time on the long-running series, Rinna’s next major role was that of Taylor McBride in the 1996 primetime soap opera, Melrose Place. First broadcasted on the Fox Network in July 1992, the show chronicled the lives of a group of individuals who live in a Los Angeles condo complex known as Melrose Place. The second instalment of the Beverly Hills, 90210 series, it starred actors Josie Bissett, Thomas Calabro, Amy Locane, Doug Savant, Grant Show and Andrew Shue, and many others. An immediate hit upon hitting the screens, it garnered over 14 million viewers during its peak in the early 90’s. The winner of a People’s Choice Award for “Favourite New TV Dramatic Series”, Melrose Place ran for a total of seven years, spanning well over two hundred episodes; the final episode aired on May 24, 1999. Rinna made her appearance as Taylor in the soap’s fifth season, the opportunistic wife of restauranteur, Kyle McBrideーthe actress continued playing the role until her departure form the show in 1998.

Continuing on with her acting into the 2000’s, Rinna appeared in a number of TV films including Another Woman’s Husband (2000), Oh Baby (2001), Sex Lies & Obsession (2001) and Good Advice (2001). In 2004, she starred as a recurring character in the popular mystery drama, Veronica Mars, appearing in three episodes of the first season.

Making her way into reality television, Rinna starred in the TV Land series Harry Loves Lisa alongside Harry Hamlin, her husband of close to twenty years. First broadcast in October 2010, it followed the lives of the couple as they tried to juggle a hectic Hollywood career while also caring for their two pre-teen children at home. Produced by the Los Angeles based production company Good Clean Fun, Harry Loves Lisa was a hit upon its premiere and quickly became the highest rated premiere which the network has ever seen since 2007. The reality series ultimately ran for six episodes before coming to an end in November 2010.

Since then, Rinna has only gotten more involved with reality TVーthe following year, she appeared as a contestant on the game series, The Celebrity Apprentice 4, where she faced off against fellow performers Lil Jon, Marlee Matlin, La Toya Jackson, John Rich and Gary Busey. Although country star Jon Rich came out as the winner, Rinna was successful in raising over $500,000 for the Entertainment Industry Foundation’s Women’s Cancer Research Fund as a semi-finalist in the competition. The actress later returned for the sixth instalment of the series, The Celebrity Apprentice 6 in 2013, where she was eventually fired during the eleventh week after raising another $500,000 for the charity.

More recently in 2014, she also participated in the ABC reality singing series Sing Your Face Off where she came out as the runner-up behind Disney actress, China Anne McClain. 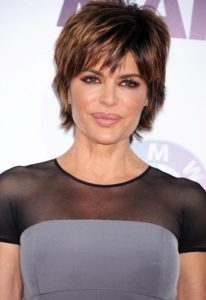 Since the fall of 2014, Rinna has been a housewife on the Bravo reality series, The Real Housewives of Beverly Hills and it looks like she’s returned once again this year for season six. The show, which first made its way onto television in October 2010, revolves around some of the most affluent women living in Beverly Hills, Los Angeles. A popular series from the get go, it has received a number of awards including four Telly Awards and a Critic’s Choice Television Award for “Best Reality Series” in 2011. The latest season concluded in May 2016 after twenty four episodes.

Aside from her involvement in the ongoing reality show, Rinna also recently announced in a heartfelt tribute on her Instagram account this January that her father, Frank had passed away. According to various reports, the ninety-four year old had been suffering from failing health for a prolonged period; at one point in the spring of 2015, he was even admitted into the hospital after experiencing pneumonia for the fourth time that year (pneumonia is a potentially dangerous condition for the elderly). Along with the announcement on her social media page, the star also posted an image of her with her father on her wedding day as a tribute, with the caption “The World Lost a Great Man today.”

If you’re looking to stay connected with the actress of Days of Our Lives fame, you can do so by following her online presence on social mediaーyou can find Lisa Rinna on Twitter as well as on Instagram under the same username of @lisarinna. Or if you’d like, you can also stay updated with her via her official Facebook and website!