What Happened to Keke Palmer – News and Updates 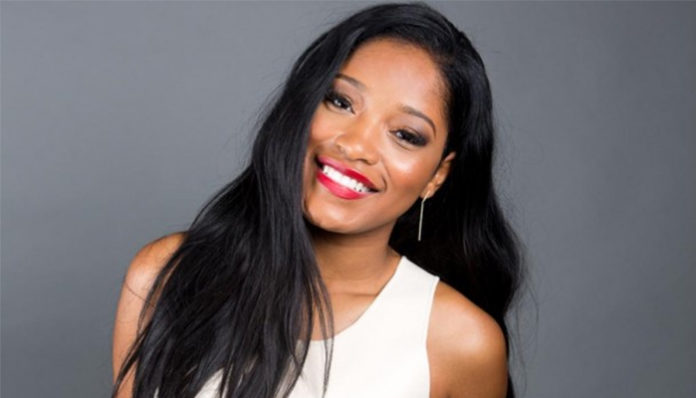 Keke Palmer is an American actress who is probably best known for her role in the drama film, Akeelah and the Bee. A performer ever since she was young, Palmer first dazzled the audience of her church with her talents when she was five years old. The daughter of two former actors, acting was inevitably something that was ingrained deep within her; when she was still in grade school, she landed a role in a stage show at a renowned tourist destination in Chicago. Although she was unsuccessful at securing a  part in a Broadway production in 2003, she was eventually cast as a small role in the comedy flick, Barbershop 2: Back in Business. While she only played a minor character in the film, it served as her official debut into the show business. Wanting to pursue further acting opportunities, she later moved to California with her family as a young teen. From there, she soon found herself with a string of television roles in Cold Case (2004), Strong Medicine (2004), The Wool Cap (2004), Keke & Jamal (2005) and Second Time Around (2005), to name a few.

After many years of playing smaller roles, Palmer received a breakthrough in 2006 when she was cast as the lead character in the drama film, Akeelah and the Bee. A huge commercial success, it garnered her much notoriety as an up-and-coming child actress; it remains to be one of her best-recognized roles on the big screen to this date. Later that same year, Palmer also starred in the comedy flick, Madea’s Family Reunion alongside actors Blair Underwood, Lynn Whitfield, Jenifer Lewis and Rochelle Aytes. Since the beginning of her career back in the early 2000’s, she has appeared in close to fifty different television series and films. An established actress despite her young age, Palmer has accumulated a number of awards over the years includingーfive NAACP Image Awards, a Young Artist Award, a BET Award, a Black Movie Award, amongst numerous nominations.

On top of being a recognized actress, Palmer is also a professional singer. In 2007, she released her debut album entitled, So Uncool under Atlantic Records; she eventually embarked on her first concert tour, the Footworkin’ Concert Tour later that same year. Since then, she has released ten music videos, two EPs, ten singles and two studio albumsーthe latest which was made available this past summer. Speaking of music, Palmer also played the role of Ella in the Broadway musical, Cinderella from 2014 until 2015. A popular artist, she has been featured in several TV talk shows including Rachael Ray (2009), The Bonnie Hunt Show (2009), Jimmy Kimmel Live! (2012), Big Morning Buzz Live (2013), and The Wendy Williams Show (2015). In 2014, she was also the host of her own talk show, Just Keke.

So what has the former child actress been up to these past few years? Is she still actively singing and acting? What happened to Keke Palmer? Where is she now in 2018? 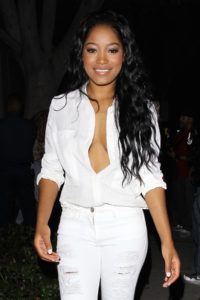 Born on August 26, 1993, Keke Palmer (Birth name: Lauren Keyana Palmer) is the daughter of Larry and Sharon Palmer, both of whom were former professional actors; they had met each other as students in a drama class. As such, she developed an interest in acting at a very young ageーPalmer first wowed audiences of her local church with her performing when she was five years old. While she was still in grade school, she landed a part in a stage show at a popular tourist destination in Chicago; it would prove to be a valuable experience for the aspiring actress.

From there, it wasn’t long until Palmer received her first professional role in the comedy film, Barbershop 2: Back in Business (2004) alongside Queen Latifah when she was eleven years old. Although she played a minor character, it ultimately served as her first step into the show business. Wanting to pursue further acting opportunities, she eventually relocated to California with her parents shortly afterwards.

Despite her talents, breaking into the entertainment industry proved to be a challengeーlike many of the others who are trying to achieve Hollywood fame, Palmer was faced with many unsuccessful auditions, one of which was for a Broadway show. With much perseverence and support from her family however, she later began landing a series of television appearances in Keke & Jamal (2005), Second Time Around (2005), ER (2005), Law & Order: Special Victims Unit (2005), and Knights of the South Bronx (2005). After playing a handful of smaller roles, Palmer received a breakthrough in her acting career when she was cast as a lead character in the drama film, Akeelah and the Bee in 2006. 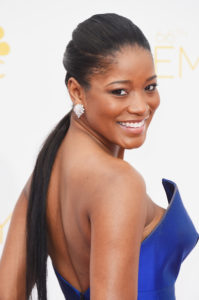 Originally released in theatres in the spring of 2006, Akeelah and the Bee depicted the story of an eleven year old girl named Akeelah Anderson who participates in the Scripps National Spelling Bee competition alongside her coach and schoolmates. Positively received by critics and audience members, many praised the film for its cast and storyline, although some did pan the production for its formulaic nature. Noted for its theme of overcoming obstacles, Akeelah and the Bee has been deemed as an inspirational film by countless viewers; it was also noted and applauded for avoiding typical African-American stereotypes.

During its theatrical run, it grossed over $6 million in its opening weekend and later went on to earn close to $19 million worldwide. While Palmer played the part of Akeelah, the film also starred Laurance Fishburne, Angela Bassett, Curtis Armstrong, Erica Hubbard and Lee Thompson Young, amongst others. For her portrayal of the main character, the young actress was recognized with multiple awards including a NAACP Image Award for “Outstanding Actress in a Motion Picture”, a Young Artist Award for “Best Performance in a Feature Film”, a Black Movie Award for “Outstanding Performance by an Actress in a Leading Role”, and a Black Reel Award for “Best Actress.”

Later that same year, Palmer starred in another motion picture called Madea’s Family Reunion. Based on Tyler Perry’s stage production of the same name, it served as the sequel to the 2005 film, Diary of a Mad Black Woman. Opened in theatres in February 2006, it centered around a grandmother who while planning her family reunion, finds herself faced with a number of situations including a runaway teen who has been placed under her care. While Madea’s Family Reunion was met with a mixed reception upon hitting the screens, it was a hit during its opening weekend and debuted at number one at the box office. Despite its small budget, it later went on to gross over $70 million worldwide. Aside from Palmer, who played the character of Nikki Grady, the movie’s cast-list also included Tyler Perry, Blair Underwood, Lynn Whitfield, Boris Kodjoe and Maya Angelous.

Continuing with her work as an actress, Palmer starred in the Disney Channel Original Movie Jump In! in April 2007. Directed by Paul Hoen, it revolved around a young boxer named Izzy Daniels who trains tirelessly in order to follow in his father’s footstep and become the winner of the Golden Glove. Filmed in Toronto, Canada, Jump In! was greatly received by younger audiences; in fact, it broke the network’s previous record (held by The Cheetah Girls 2) and became the highest movie premiere with over eight million viewers. In the Disney film, Palmer played the role of Mary Thomasーthe leader of the Double Dutch team Joy Jumpers who later becomes the love interest of the male protagonist, Izzy Daniels. Other cast members include David Reivers, Laivan Greene, Kylee Russell and Shanica Knowles. Aside from having been a hit on the screens, Jump In! also spawned a critically acclaimed soundtrack which peaked at number three on the Billboard 200.

After a series of film roles, Palmer was cast as the title character in the Nickelodeon sitcom, True Jackson, VP. Created by Andy Gordon, it followed the life of a fifteen year old teen named True Jackson, who becomes the vice president of a fashion company known as Mady Style. Premiered on television in November 2008, True Jackson, VP featured Palmer in the role of True Jackson and also starred Ashley Argota, Matt Shively, Danielle Bisutti and Robbie Amell. Hugely popular, the series received multiple awards and nominations including an NAACP Image Award in 2011 for the category of “Outstanding Children’s Program.” A year after its premiere, the show also spawned a line of children and teens clothing called Mad Style by True Jackson, which was exclusively available in Wal-Mart stores. After a four year run, the sitcom came to an end after sixty episodes. Praised for her performance, Palmer was awarded with four NAACP Image Awards and a BET Award during its run.

In October 2012, the actress starred in the Lifetime television film, Abducted: The Carlina White Story. Directed by Elizabeth Hunter, it depicted the real life story of Carlina Whiteーa girl who was kidnapped as an infant in the 1980’s and eventually reunited with her biological parents two decades later. The first infant kidnapping case reported in New York, the incident caused quite a stir when it happened in the late 80’s. It had Palmer playing the lead role of Carlina White and also starred Aunjanue Ellis, Sherri Shepherd, Roger Cross and Heather Doerksen. Having garnered over four million viewers during its premiere, Abducted: The Carlina White Story received four Black Reel Award nominations and four NAACP Image Award nominations.

The next year, Palmer played yet another lead role in the biographical film, CrazySexyCool: The TLC Story (2013). Premiered on the VH1 network that October, it starred Niatia Kirkand, Drew Sidora and Palmer and revolved around the popular hip hop girl group, TLC. A hit amongst viewers, it attracted 4.5 million viewers during its premiereーmaking it the highest-rated made-for-television film of 2013. Later released on DVD in 2014, CrazySexyCool: The TLC Story earned Palmer a Black Reel Award nomination for “Best Actress in a Mini-Series or Movie” and a NAACP Image Award for “Outstanding Actress in a Television Movie.”

What Happened to Keke Palmer in 2018 – News and Updates 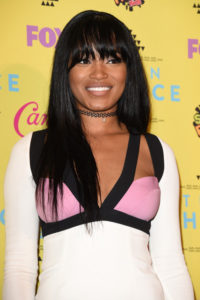 This year, Palmer has been busy reprising her role as Zayday Williams in the comedy horror, Scream Queensーone which she’s been portraying since 2015. Originally premiered in September 2015, it centers around a group of individuals who constantly are terrorized by a serial killer. Although it was met with mixed reviews from critics initially, ratings have since gone up with the airing of the second season. Scream Queens currently airs every Tuesday on the Fox network at 9PM.

Aside from the ongoing project, she has also been filming for a drama film called Pimp, which is currently in the post-production stages. Directed and written by Christine Crokos, it will also star Aunjanue Ellis, Edi Gathegi, Haley Ramm, Vanessa Morgan and Ashley Blankenship.

If you’d like to stay connected with the talented actress, you can do so by following her on social mediaーyou can find her on Twitter (@KekePalmer) as well as on Instagram (@kekepalmer).